Chris Gayle has the power to smash huge scores 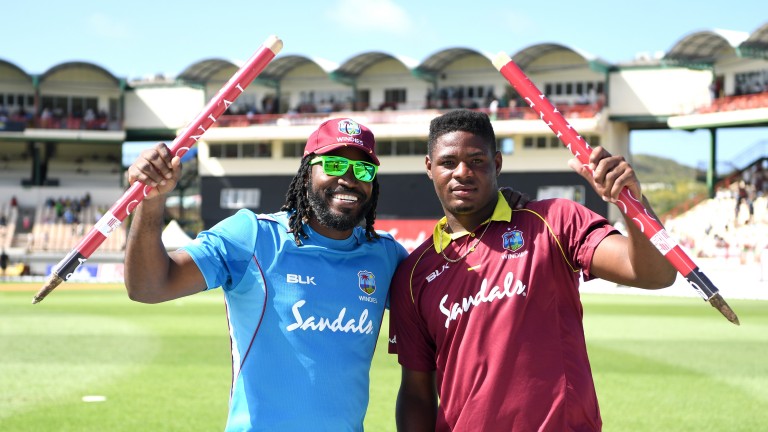 Captain, right-handed batsman, right-arm medium-fast bowler
Bidding to become the first Windies captain to win the World Cup since Clive Lloyd 40 years ago, Holder has been quick to back claims that his side can lift the trophy in England.

Awarded the captaincy at the age of 23 in 2014, he has emerged as a natural in the role, leading by example with bat and ball.

The all-rounder gained experience of England's challenging surfaces after a successful One-Day Cup stint with Northamptonshire this season. He has scored 1,574 runs and taken 121 wickets in 95 ODI appearances.

Right-handed batsman, off-spin bowler
Youngster Allen was possibly the most surprising selection in the squad given that his ODI career is in its infancy and his early statistics leave a lot to be desired.

Deemed an all-rounder of the future, he has played four matches in the format, scoring 25 runs and failing to take a wicket.

The decision to include Allen was influenced by his explosive batting performances in the Caribbean Premier League and his steady form in Twenty20 internationals, in which he has taken eight wickets in nine matches.

Right-handed batsman, right-arm fast-medium bowler
Four successive sixes from the all-rounder powered West Indies to victory over England in the T20 World Cup final two years ago and he will be hoping to replicate those heroics in the ODI World Cup.

An average of 14.4 with the bat and a total of 31 wickets in 33 ODIs do not make for pleasant reading but recent performances suggest he will go into the tournament in good form.

Brathwaite took two wickets and made a half-century in the fourth ODI against England in February and blasted 60 runs in a World Cup warm-up game against Australia.

Left-handed batsman
A cousin of Brian Lara and half-brother to all-rounder Dwayne, the left-hander's inclusion in the World Cup squad has been greeted with some hostility.

With over 100 ODI caps, Bravo brings experience to the top order but recent form is a cause for concern.

He has reached double figures only once in his last seven ODI innings and, with the exception of 2010, has never averaged more than 40 in a calendar year. His steady approach to runscoring could do more to hinder the Windies than help them on flat English pitches.

Right-handed batsman, left-arm fast-medium
Adept at making early breakthroughs with his left-arm seam, the 29-year-old is still in the early stages of his ODI career, having played only 14 matches in the format.

He has made a good early impact, though, dismantling England's top order in the second ODI in Barbados with figures of 5-46 after missing the first match of the series.

Razor sharp in the field, Cottrell's heavy involvement in the recent Tri-Series suggests he could have a key role to play in this tournament.

Right-handed batsman, right-arm fast bowler
The paceman was a surprise inclusion in the ODI squad, having last played in the format in 2017, but was eased back into the team in the recent Tri-Series with Ireland and Bangladesh.

Gabriel took eight wickets in four matches, finishing with figures of 2-30 in the final, and has been described by captain Holder as "an impact player who can make inroads into the middle-order".

The 31-year-old was part of a Windies attack who tormented England in this year's Test series. 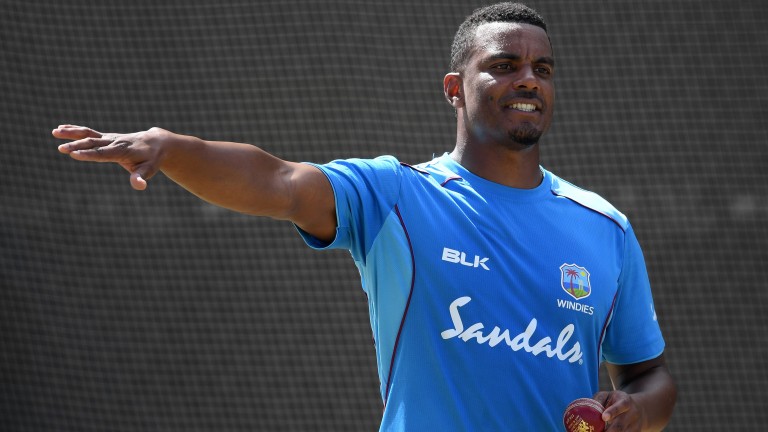 Left-handed batsman, off-spin bowler
The Jamaican powerhouse returned to the ODI team with two hundreds and two half-centuries in four innings in the home series against World Cup favourites England earlier this year.

Gayle's tally of 490 runs, featuring four fifties, in this season's IPL may have fallen short of his high standards, but he will be eager to close his ODI career with his nation's first World Cup since 1979.

He has scored 25 centuries in the format and will be keen to boost his average of 39 from 30 ODIs in the UK.

Left-handed batsman, leg-spin bowler
Big hitter Hetmyer captured the attention of English cricket fans with a dazzling 81 from the middle-order in the Bridgetown Test against England and 104 from 83 deliveries to help level the ODI series 2-2.

Captain of the West Indies Under-19 side who won the World Cup three years ago, the 22-year-old struggled to follow those displays against England with consistent performances in this year's IPL.

He managed just 90 runs in five matches for Royal Challengers Bangalore and will be hoping to improve his overseas form for Holder's men this summer.

Right-handed batsman, wicketkeeper
It is no overstatement to say the future of West Indies cricket could rest on the shoulders of 25-year-old wicketkeeper-batsman Hope, whose recent Tri-Series performances propelled him into the top five of the ICC's ODI batting rankings.

Hope registered two hundreds and two fifties in the contests with Bangladesh and Ireland and now boasts 2,247 runs in 50 ODI innings.

Having established himself at the top of the batting order, Hope is held in high regard by his skipper Holder who said he could be "one of the best ODI players to ever play".

Left-handed batsman
Lewis describes veteran teammate Chris Gayle as his "mentor" and, like Gayle, he has become one of the most devastating batsmen in Twenty20 cricket, scoring two centuries and four half-centuries in T20 internationals.

He has shown glimpses of his big-hitting prowess in ODIs as well, amassing 1,227 runs in 32 innings, including a spectacular 176 not out against England at The Oval in 2017.

Right-handed batsman, off-spin bowler
Defeat to Bangladesh in the final of the recent Tri-Series in Ireland was not without its positives for the West Indies.

Spinner Nurse took 3-53 in Malahide's seam-friendly conditions to finish top of the wicket-taking standings with seven scalps in the series against the Tigers and Ireland.

The West Indian batting looks to be their stronger suit but Nurse, who has taken 49 wickets in 50 ODIs, adds a different dimension to their bowling attack.

The 23-year-old was a star performer in the triumphant Under-19 World Cup campaign five years ago, smashing 143 in the quarter-final clash with Australia.

In 2015 he overcame a potentially career-threatening injury in a car accident to emerge as one of the nation's brightest young players despite having played only one ODI and 11 Twenty20 internationals.

Right-handed batsman, right-arm fast-medium bowler
The 30-year-old gave England's batsmen nightmares in this year's Test series but missed the one-dayers through injury and faces tough competition to take the new ball for the Windies.

Roach posted mediocre figures of 0-57, 1-46 and 2-28 in the recent Tri-Series with Ireland and Bangladesh but his speed and swing make him an exciting component of the attack.

Right-handed batsman, right-arm fast bowler
It is difficult to name a more destructive all-rounder in the Twenty20 format than Jamaican colossus Russell.

Only four batsmen bettered his tally of 510 runs in the 2019 IPL but nobody came close to his total of 52 tournament sixes and he also took 11 wickets for Kolkata Knight Riders.

Russell is raw as far as ODIs are concerned, having not played in the format since July 2018 against Bangladesh, but his threat with bat and ball render him one of the Windies' most valuable assets.

Left-handed batsman, right-arm fast bowler
The rapid Jamaican was snapped up by Rajasthan Royals in the IPL following some excellent performances in the Caribbean Premier League and he made his mark in the final ODI against England in March.

Thomas ripped through the English middle-order in St Lucia, finishing with figures of 5-21, and he claimed five wickets in four lively appearances in his debut season in the IPL. 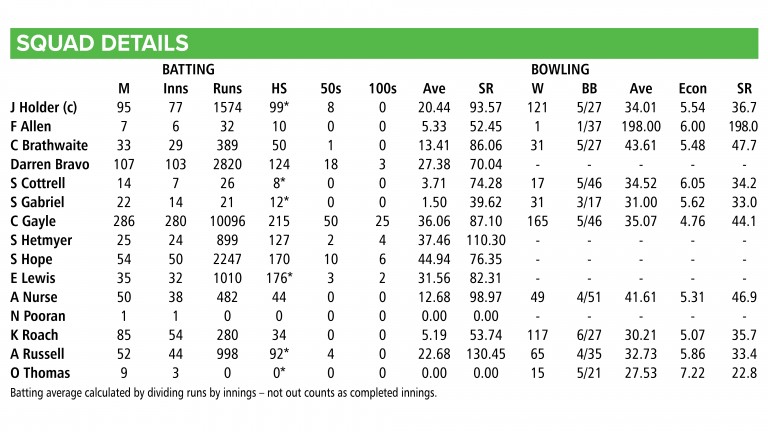