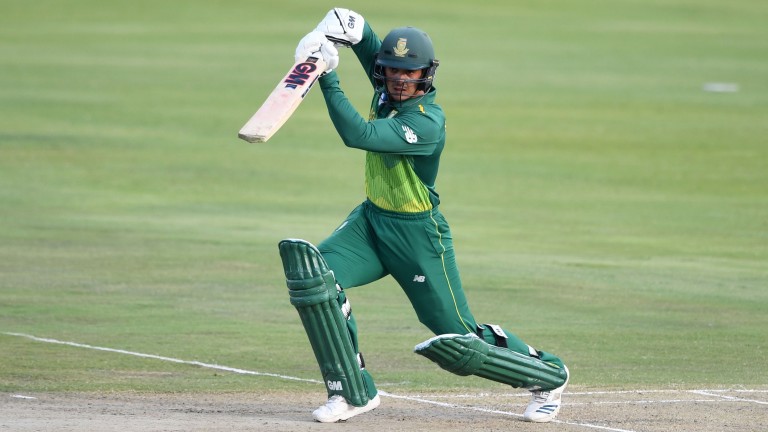 Captain, right-handed batsman
Proteas captain Du Plessis has been a fixture in the South African batting line-up in all forms of the game since making his debut for the one-day team in 2011.

He was South Africa's second-highest runscorer at the 2015 World Cup, behind AB de Villiers, but averages just 28.53 in England in ODI cricket despite spending time at Lancashire when he was younger. He will want to do better if he is to lead his team to glory.

Du Plessis adds consistency to the batting unit and, as captain, he is the driving force behind a team ranked third in the world in all three formats.

Right-handed batsman
Amla is South Africa's most prolific one-day international century-maker but the 36-year-old has arrived in England short of runs and his opening spot hangs in the balance.

He struck his 27th ODI century in the home series against Pakistan in January but missed the series with Sri Lanka for personal reasons and has struggled in South Africa's domestic T20 competition.

Prolific in English conditions, Amla finding his top form would be a big boost to South Africa's chances. 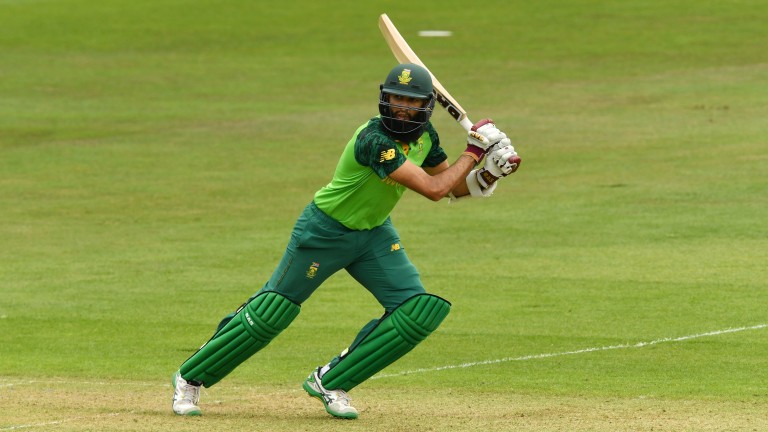 Hashim Amla is an experienced batsman for the Proteas
Dan Mullan

Left-handed batsman, wicketkeeper
De Kock is only 26 years old but South Africa's dynamic keeper-batsman has already chalked up an impressive 14 one-day centuries and there will surely be more to come this summer.

An explosive opening batsman with an ODI strike-rate of 95.81, De Kock blitzed 353 runs at an average of 70.6 in the Sri Lanka series and promptly hammered 529 more to help Mumbai Indians to IPL glory.

A tidy gloveman, the Johannesburg native has been effective in all formats for the Proteas but often shines brightest in 50-over cricket.

Left-handed batsman, off-spin bowler
Shoulder surgery meant Duminy missed a large part of the South African domestic season but the veteran all-rounder, who will retire after this tournament, may still have an important role to play.

The stylish left-hander spent the best part of ten years trying to nail down a place in the Test team but he has been a useful player with both bat and ball in the shorter formats.

His greatest ODI moment in a Proteas shirt came with the ball, when his part-time off-spin yielded a hat-trick against Sri Lanka in a quarter-final victory at the 2015 World Cup.

Right-handed batsman, off-spin bowler
Markram burst on to the scene as captain of South Africa's victorious Under-19 World Cup team in 2014 and the aggressive opener is beginning to establish himself at senior level.

The 24-year-old has already impressed with four Test centuries and scored a career-best 67 not out in his last ODI appearance.

Markram demonstrated his white-ball prowess in scoring 466 runs for Hampshire in this season's One-Day Cup and that experience of English conditions will be valuable. He also picked up five wickets for good measure.

Left-handed batsman, wicketkeeper
Miller provides fireworks in the middle-order but the 29-year-old has had an average year and is arguably a weak link in the Proteas' batting line-up.

He demonstrated his brilliance with an innings of 139 in Australia in November 2018 but the Natal man is yet to pass 50 in eight ODI appearances this season and looked in scratchy form for Kings XI Punjab in the IPL.

A one-day specialist, Miller brings a spark in the field and will don the wicketkeeping gloves if anything happens to De Kock.

Right-handed batsman, right-arm fast-medium bowler
A quick bowler and a brutal lower-order batsman, Morris earned a World Cup reprieve after Anrich Nortje was ruled out with a fractured thumb.

Morris was a late developer who is best known for his exploits in Twenty20 cricket. He has earned some huge IPL contracts and is a regular for the Proteas in the shortest format.

While not a member of the original squad, Morris will be eager to make his 50-over World Cup debut especially as he hasn't played an ODI in more than a year.

Right-handed batsman, right-arm fast bowler
Ngidi is the youngest member of South Africa's squad but he was the Proteas' leading wicket-taker in ODI cricket in 2018 and there is likely to be more to come from the 23-year-old.

He broke into the Twenty20 side with a man-of-the-match performance against Sri Lanka in 2017 and has replicated that success in both the Test and 50-over arenas over the last 18 months.

The tall quick picked up eight wickets in the five-match ODI series against Sri Lanka but suffered a side strain before the start of the IPL that has hindered his World Cup preparation.

Left-handed batsman, right-arm fast-medium bowler
Adept with both bat and ball, Phehlukwayo has quickly developed into an important player for South Africa in all three formats.

The 23-year-old can be expensive with the ball, but his wicket-taking ability is not in doubt as he proved when bursting on to the scene to claim top-bowler honours in 2016's 5-0 one-day series victory over Australia.

A useful contributor of lower-order runs, Phehlukwayo averages 32 after 25 one-day innings and looks to have the number-seven spot nailed down.

Right-hand batsman, right-arm medium-fast bowler
All-rounder Pretorius is not likely to be selected if the Proteas are at full strength but, in a tournament featuring a minimum of nine matches, the 30-year-old should prove an able replacement if called upon.

Pretorius is relatively inexperienced on the international scene, but this economical, accurate swing bowler could prove useful in English conditions.

With the bat, he is capable of scoring rapid runs, a quality he demonstrated when striking 77 off 42 in a March T20 international against Sri Lanka.

Left-handed batsman, right-arm fast bowler
A wonderfully destructive fast bowler when on song, Rabada has already achieved plenty in the game despite his tender years.

The quick man, who turns 24 on the eve of the World Cup, possesses the raw pace to trouble even the most competent batsman but his record in England in unexceptional – he took just one wicket in three Champions Trophy matches – and a change in fortunes may be key to South Africa's bid for glory.

Despite an injury which limited him to 12 appearances, Rabada was the second-highest wicket-taker in the IPL this season and will be hoping to translate his Twenty20 form into the 50-over arena. 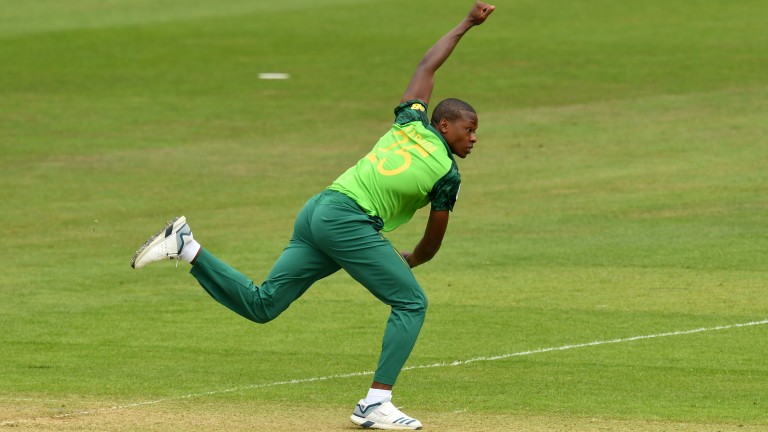 A slow left-armer, Shamsi has represented the Proteas in all three formats over the last few years but the bulk of his success has come in one-day cricket, and economy, rather than wickets, will be his game if he is called upon.

Not much of a batsman, the 29-year-old is yet to score a run in six limited-overs innings for the national team, although he does have an unbeaten 18 to his name at Test level.

Right-handed batsman, right-arm fast bowler
A fit and firing Dale Steyn is still a frightening prospect for any batsman but, at the age of 35, South Africa's leading Test wicket-taker may well call time on his ODI career in England this summer.

At his best, Steyn was a fearsome bowler and, despite struggling with injuries in recent years, he can count 23 World Cup wickets at an average of 23.39 and an economy rate of 4.67 as a respectable return.

The fast man has played just nine ODIs since the start of 2017 but still has plenty to offer, as he demonstrated by taking seven wickets in three matches against Australia in November 2018.

Right-handed batsman, right-arm leg-spin bowler
Into his fifth decade but ranked fourth in the ICC's ODI bowling rankings, Tahir was touted as the man to end South Africa's long wait for a top-class Test spinner but instead found his niche in the shorter formats.

If Sri Lanka's tour of South Africa is anything to go by, the 40-year-old is getting better with age. He took nine wickets from four matches at an average of just 13 and had the lowest economy rate of any bowler in the series.

Tahir can play a containing role and take wickets, making him a captain's delight. He took 14 scalps at the 2011 World Cup and went one better with 15 in Australia and New Zealand in 2015. He will be a key man with the ball for the Proteas.

Right-handed batsman
Few outside South Africa had heard of Van der Dussen when he made his debut in a Twenty20 international against Zimbabwe in November 2018 but the 30-year-old took an immediate shine to international cricket and has not looked back.

Van der Dussen scored 56 that day and has since played eight ODI innings, striking four half-centuries at an impressive average of 88.25.

An unlikely World Cup debutant, the Pretorian has done little wrong in his short international career and arrives at his first major tournament after a successful domestic T20 campaign in which he scored the joint-most runs to help Highveld Lions take the title. 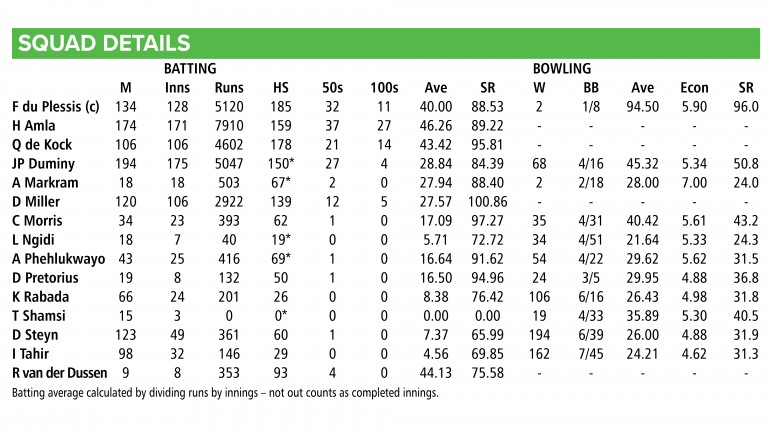