Men in Green cut for semi-final berth after Edgbaston glory 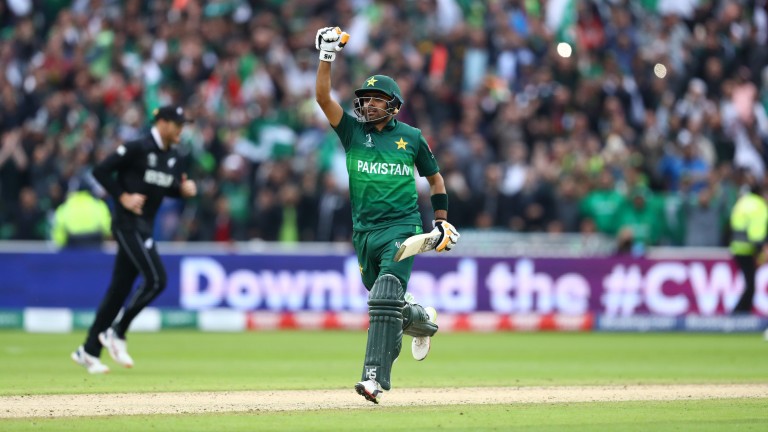 Pakistan gave their World Cup semi-final hopes a tremendous boost by ending New Zealand's unbeaten start in the tournament with a crucial six-wicket success at Edgbaston.

The Men in Green are 5-4 from 3-1 to make the top four after moving up to sixth in the standings with their third win of the competition.

New Zealand chose to bat but following another poor first-wicket stand from Martin Guptill (five) and Colin Munro (12) they found themselves in big trouble at 46-4 and 83-5.

James Neesham, a 12-1 shot to top-score for the Black Caps, fired an unbeaten 97 and Colin de Grandhomme posted 64 to give New Zealand a defendable total of 237-6.

Kane Williamson's side went 5-4 in-play for the win after reducing Pakistan to 44-2 but a polished innings from Haris Sohail (68) and Babar Azam's unbeaten 101 sealed the win.

The result is damaging for England, who have drifted to 4-5 to make the semi-finals. The pressure is on Eoin Morgan's men to win their remaining fixtures against India on Sunday and New Zealand next Wednesday. They are 9-2 from 7-2 to win the World Cup.

They are one point ahead of 10-1 shots Pakistan, who face Afghanistan next before a potentially decisive contest with Bangladesh, who are level on points with the Men in Green and 8-1 to make the last four themselves.

New Zealand remain on course to make the semi-finals but have lengthened to 7-1 to lift the trophy.