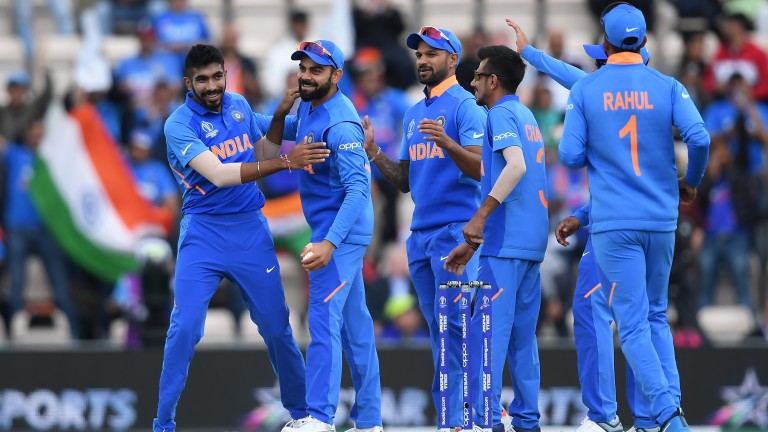 A month can sometimes feel like a lifetime in sport.

When England strode out onto the Oval outfield to raise the curtain on the 2019 World Cup on May 30, most of the partisan crowd packed into the famous London venue were full of anticipation that this would be the start of a golden summer for the Three Lions. The subsequent demolition of South Africa did little to dampen their enthusiasm.

Many observers identified England’s penultimate group clash with India at Edgbaston as a potential dress rehearsal for the World Cup final itself, but a month down the road that looks increasingly less likely.

Eoin Morgan’s hosts and pre-tournament favourites are clinging on to a top-four berth after successive defeats to Sri Lanka and Australia and face the prospect of having to win at least one, if not both, of their remaining fixtures against the unbeaten Indians and New Zealand on Wednesday if they are to make the semi-finals.

India have usurped the hosts as World Cup favourites and the number-one ranked side in the world through England’s travails and their own serene campaign. One more victory from their final three games should be enough for Virat Kohli’s men to secure their place in the last four and bookmakers are favouring them to get it over with at Edgbaston.

England were 4-7 to win this match when betting opened prior to the tournament and they remained as short as 8-11 in the aftermath of their defeat to Sri Lanka at Headingley. But a loss to Australia, coupled with India’s hammering of the West Indies on Thursday has seen the sides flip-flop in the market.

India have barely put a foot wrong in their six group games, winning five of their six completed contests - their match with New Zealand was abandoned - with all their squad contributing at different times so on current form they are worthy favourites.

Edgbaston has shown signs of being receptive to spin in recent years and in two group games at this year's World Cup. That could play into India's hands, although the wicket at the Birmingham venue is fresh and expected to offer little assistance to bowlers of any type.

The pitch has been left uncovered in the recent heatwave meaning it will have become harder and allow the ball to come onto the bat with more ease - something most pundits expected to see throughout the tournament but hasn't occurred due to wet weather earlier this month.

That will be good news for Morgan's side who like to bludgeon the ball to all parts of the ground on such wickets but if anyone can match, or perhaps better, England's power players then it is India.

Openers Rohit Sharma and Lokesh Rahul have both been in the runs, sharing a 136-run opening stand against Pakistan a fortnight ago, and then comes inimitable skipper Kohli, who has followed 18 against South Africa in India's opener with four consecutive half-centuries.

The Edgbaston wicket might suit England better after they came undone against Sri Lanka and Australia on tough tracks but it will be no problem for a high-calibre and confident India batting unit.

England have said that they are prepared to risk Jason Roy at the top of the order after three games out with a torn hamstring. Seam bowler Jofra Archer is also likely to retain his place despite not bowling in training on Friday due to a stiff side.

India are expected to stick with the team who hammered the West Indies at Old Trafford on Thursday.

England have won their last nine internationals in all formats at Edgaston, including a 2015 ODI demolition of New Zealand when they passed the 400-mark for the first time thanks to centuries from Joe Root and Jos Buttler.

However, the Birmingham ground has also been a home from home for India in recent time with the visitors winning each of their last five ODIs in England's second city. In four 50-over clashes with England, India have come out on top three times.

Another warm day is expected in Birmingham with temperatures around 22C with some cloud cover.