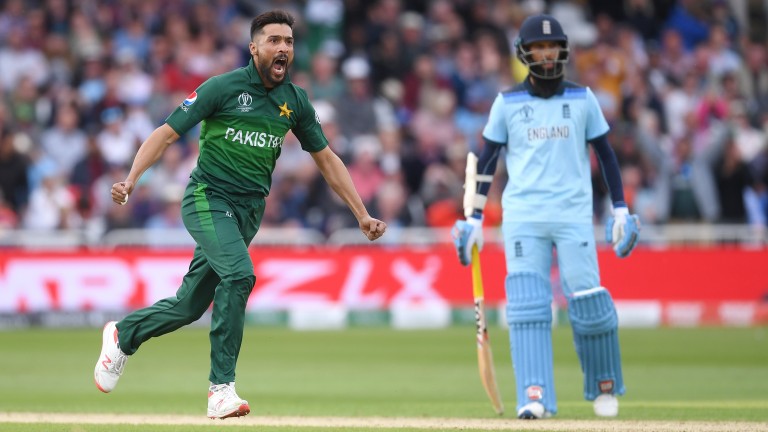 Pakistan could look a bit of value to turn over Australia at Taunton.

That is, if the rain relents for long enough, and the County Ground outfield is not so waterlogged that the minimum number of overs cannot be played.

And, of course, if Pakistan's batting functions like it did at Trent Bridge against England last week rather than the shambles of their World Cup opener against West Indies at the Nottingham venue.

Only six of Sarfaraz Ahmed's squad were involved in March's 5-0 drubbing by the Gold & Greens in the UAE.

Pakistan won the Champions Trophy in England two years ago after losing their first match to India and after Friday's washout in Bristol against Sri Lanka, they will have had eight days to recover mentally and physically.

Australia have been involved in two intense encounters in the last six days, beating the Windies after wobbling to 38-4 at Trent Bridge on Thursday and losing to India at the Oval on Sunday.

However, it is hard to shake from the mind just how badly Pakistan's batsmen struggled against the Windies' quicks in their opener and Aussie new-ball duo Mitchell Starc and Pat Cummins look in the groove.

Starc and Cummins dismissed both Afghan openers for ducks in their first game, harried the Windies throughout their chase of 289, and were disciplined yet inventive on an unusually low-bouncing Kennington pitch against India.

Australia captain Aaron Finch hit two centuries and two fifties against Pakistan in March and his predecessor Steve Smith made fifty in both his knocks against the West Indies and India. Taunton's limited-overs tracks tend to be true even in bowler-friendly conditions.

But, with the weather as it is, it has to be sensible to go with the seamers for wagers and Mohammad Amir to take two wickets and Pat Cummins to be Australia's top wicket-taker fit the bill.

As well as claiming Jos Buttler's wicket, Amir accounted for Jofra Archer in Pakistan's win over England and he took the three Windies wickets to fall in their opener.

In the 2017 Champions Trophy final, Amir dismissed India's tremendous top three of Rohit Sharma, Shikhar Dhawan and Virat Kohli and conceded only 16 runs. Before his ban for ball-tampering in 2010, he wreaked havoc in T20s and Test series against Australia played in England.

Cummins started the World Cup with a three-wicket haul against Afghanistan and was by far Australia's most accurate and hostile bowler against the Windies, although Mitchell Starc stole the headlines by becoming the player to reach 150 ODI wickets fastest.

Pakistan couldn't cope with the pace and accuracy of the Windies' right-arm quicks at Trent Bridge and facing Cummins will be a challenge for them.

Australia
All-rounder Marcus Stoinis is out with a side strain. Leg-spinner Adam Zampa's place in the team is under scrutiny.

Pakistan
Coach Mickey Arthur has no injury worries so it will be interesting to see if they recall Haris Sohail, who hit two tons against Australia in March and top-scored with 41 in their 2015 World Cup clash.

New Zealand bowled out Afghanistan for 172 at Taunton on Saturday without skipper Kane Williamson deploying a spinner and the Black Caps' three wickets all went to right-arm quick Aftab Alam. One-Day Cup victors Somerset hit 358-9, 353-5 and 292-5 in winning three of their four home group games and when the Cidermen were skittled for 213, they lost. It was two wins apiece for teams batting first and second.

Early morning rain is forecast to clear but persistent dark clouds mean that showers are likely, particularly late in the afternoon. 13C