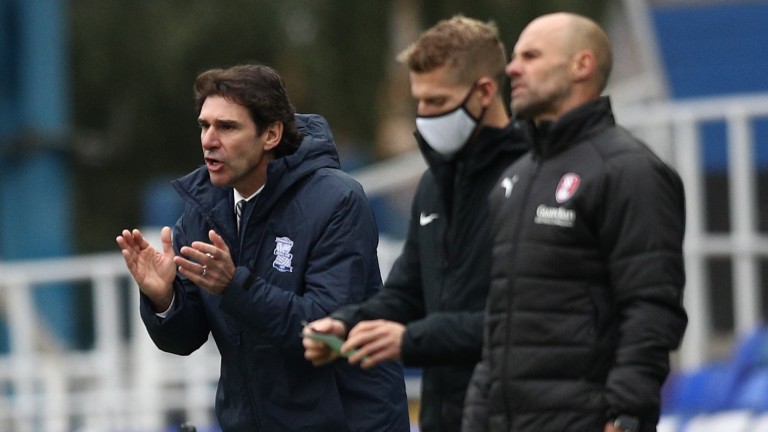 Aitor Karanka can guide his Birmingham side to victory over groundshare rivals Coventry
Jan Kruger
1 of 1
By Steve Davies 5:30PM, NOV 19 2020

Birmingham
Jonathan Leko and Jeremie Bela are pushing for recalls.

Groundshare rivals Coventry and Birmingham usher in a new era of more subs, though it's goals rather than changes which are occupying the thoughts of the respective managers.

The EFL has agreed to permit five substitutions for the remainder of the season, starting with the Championship showdown at St Andrew's between the ground's landlords and their tenants.

While that added flexibility will doubtless delight Coventry boss Mark Robins and opposite number Aitor Karanka as they head into a gruelling section of the schedule, they have more pressing concerns.

Both men will have used the international break to address those issues and of the two, Coventry's weaknesses appear more of a concern. If one goal is enough to decide this contest then Birmingham should be backed to get it.

The Blues, notionally the away team, come into the game with a five-point cushion over Coventry despite suffering a pair of losses going into the break.

The second of those, 3-1 at home to Bournemouth, was largely forgivable and the effort was there. Certainly more effort than there had been in the match before, which ended in a desperate 2-1 defeat to Wycombe.

Karanka is crying out for a goalscorer. He perms from either Lukas Jutkiewicz or Scott Hogan, sometimes playing the pair of them together, and so far they have managed just one goal apiece.

They need better service but they also both look chronically short of confidence.

At the other end they are generally fine and should be even better with Jake Clarke-Salter back in the defence, which is currently a back three.

Coventry have managed three more goals than Birmingham but they are an accident waiting to happen defensively.

Their record of 23 goals shipped is by far the worst record in the section and they have managed just one clean sheet in their 11 outings. In nine of those matches, including in each of their last five, they have let in at least two.

Interestingly, Birmingham have had 36 shots on target this season compared to Coventry's 35 which demonstrates which side is the more clinical.

But Coventry are conceding a divisional-high 5.6 shots on target per game and that is a weakness that Birmingham should be able to punish.

Coventry have conceded at least two goals in nine of their 11 Championship matches.

FIRST PUBLISHED 5:30PM, NOV 19 2020
The EFL has agreed to permit five substitutions for the remainder of the season