Count on battling Leeds to keep themselves in the hunt

Visitors worth backing for a positive result 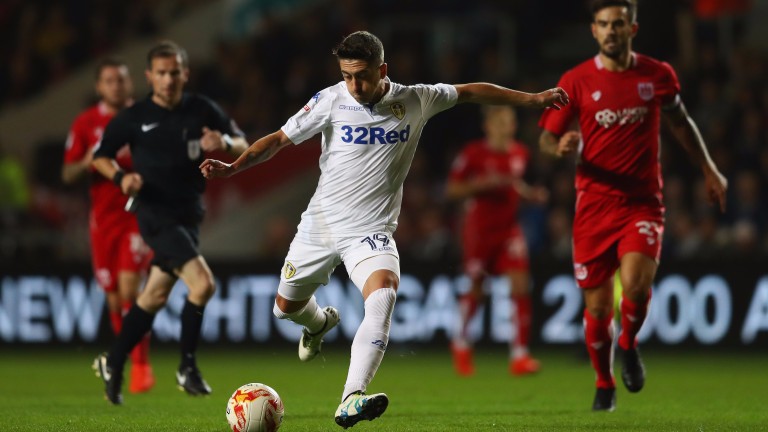 Pablo Hernandez of Leeds may make his first start for seven weeks
Michael Steele
1 of 1
By Dan Childs 7:01PM, DEC 28 2016

Eight wins in ten league games have lifted Leeds into the thick of the Sky Bet Championship promotion race and the Yorkshire giants look capable of taking at least a point from this tough fixture at Villa Park.

Leeds started off the month with a 2-0 victory at home to Aston Villa and are 14-5 shots to complete a quick-fire double over Steve Bruce’s side.

The match at Elland Road was evenly contested but Leeds finished the game strongly and scored both goals in the last 30 minutes.

After the game Villa were happier with their performance than the result but those feelings were reversed after their 2-1 success at home to struggling Burton on Monday which was barely deserved.

Bruce made a couple of very attacking substitutions during the Burton game and finished with three forwards in Jordan Ayew, Ross McCormack and Gabby Agbonlahor, attacking midfielder Jack Grealish and winger Albert Adomah on the pitch.

He will have to start off more cautiously against Leeds but has some tough decisions to make because none of his midfielders – Gary Gardner, Mile Jedinak and Ashley Westwood – have been playing particularly well.

Bruce has several players – most notably top scorer Jonathan Kodjia – who are capable of producing a match-winning moment of brilliance, but Garry Monk’s side have a better balance.

The visitors are also boosted by the recent return from injury of striker Chris Wood and attacking midfielder Pablo Hernandez, who came off the bench during Monday’s 4-1 win at Preston.

Winning by three goals against Preston, who had lost just one of their previous eight home games, was probably the biggest statement so far by a young, exciting Leeds side, who are steadily improving.

But if their season is to have a happy ending they will need eccentric owner Massimo Cellino to come up with the goods in the January transfer window.

There are some important issues to be resolved with Hernandez’s half-season loan from Qatari club Al-Arabi coming to an end in January and on-loan Genoa defender Pontus Jansson one game away from triggering a clause which would allow Leeds to take up the option of a permanent transfer.

Both are vital players who need to be kept on board for the rest of the season and Monk could also do with a few additions.

There is scepticism over whether the necessary transfers will be achieved and that may explain why Leeds are as big as 7-1 to go up, while Villa are shorter at 11-2 despite being seven points lower in the table.

The longer-term prospects of Villa, who have the massive benefit of Premier League parachute payments, may be better but Leeds have looked the stronger of the teams in recent weeks and can snatch at least a draw today.

Team news
Aston Villa
No fresh injuries are reported but Micah Richards (knee) is out long term.
Leeds
Pablo Hernandez (hamstring) may be ready to make his first start in seven weeks and Kyle Bartley (head) should continue. Charlie Taylor (Achilles) is a doubt.