Sport in lockdown: how & where sport could return in the wake of the coronavirus 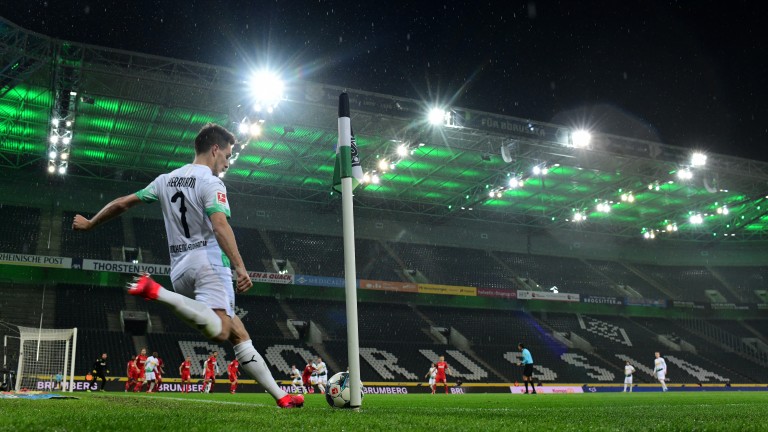 The Bundesliga could be the first major European league to resume behind closed doors
Jorg Schuler
1 of 1
By Racing Post Sport UPDATED 1:05PM, MAY 7 2020

With the sporting calendar decimated by the coronavirus, we provide a complete guide as to when sport could return.

Uefa decision
Europe's governing body remains keen for domestic seasons to be finished but have drawn up guidelines for qualification for next term should a league be ended without reaching a conclusion.

Champions League and Europa League spots are expected to be determined on "sporting merit" and there are two suggestions for that. One is a points per game method and another is to have playoffs.

Premier League
The Premier League is hoping to resume matches on June 8, with all 20 clubs sent a revised timetable to see out the rest of the season.

According to reports in the Daily Telegraph, the new schedule will see clubs back in full training from May 18 but is subject to government approval and works on the basis that lockdown restrictions will be eased in the next announcement due on May 7.

Matches would be played without supporters and possibly at neutral hubs with multiple fixtures.

EFL
The season is currently suspended indefinitely and there is no date suggested for when the EFL could return. They believe the season, including playoffs, can be done in 56 days.

National League & below
National League clubs voted to end the league at its current point on April 22 but are yet to clarify their position on promotion and relegation. Divisions below the National League have had their seasons abandoned.

Scotland
The SPFL have brought an end to seasons in the divisions below the Ladbrokes Premiership, which is reportedly heading in the same direction.

Ligue 1
France became the highest-profile league to cancel the season after Prime Minister Edouard Philippe announced a ban on sporting events until September.

Paris St-Germain, who held a 12-point lead over second-placed Marseille when play was suspended, were awarded a seventh Ligue 1 title in eight years on April 30.

Bundesliga
Germany's top flight will be the first major European league to resume after Chancellor Angela Merkel and the premiers of Germany's 16 states agreed to allowing the league to restart on May 16. All matches will be played behind closed doors and each club has nine games remaining.

La Liga
The Spanish authorities are yet to give a return date for La Liga, although early June is thought to be the most likely. There could be changes to how the games are broadcast behind closed doors with alternative camera angles and pitchside microphones as well as empty stands covered in tarpaulin to minimise the visual impact.

Serie A
Prime Minister Giuseppe Conte has said individual training can resume on May 4 and groups on May 18 with many tipping a return date in early June for Serie A to resume.

Netherlands
The Dutch Eredivisie was ended with no champions, relegation or promotion. Ajax and AZ Alkmaar qualified for the Champions League.

Belgium have already ended their championship and Uefa have said some leagues can be cancelled in "special cases."

Others
Belarus is the only European league still going, while the Danish Superliga aims to recommence on 17 May with the season finishing by the end of July.

Major League Soccer is not expected to return until at least June 8 and Guangzhou R&F chairman Huang Shenghua has said the Chinese Super League will restart in either late June or early July.

South Korea's K-League will start on May 8.

Poland have announced plans to restart the season on May 29. They expect to finish the season by July 19 as per Uefa guidelines, while Ukraine expect to start up again on June 12.

Uefa club competitions
The Champions League and Europa League remain suspended. The most likely outcome is all of the remaining rounds are played in August, possible with the quarter-finals, semi-finals and final played over one leg in a short period at a neutral venue, similar to a World Cup or European Championship finals.

Internationals
All matches have been postponed until September and Fifa's medical committee chairman, Michel D'Hooghe, has said he does not believe any football should return then.

Euro 2020 has been moved to the summer of 2021 with the playoff semi-finals most likely to be played in October of this year with the batch of finals in November.

The NFL season starts on September 5 and is scheduled to begin on time, probably without fans.

The Tokyo Olympics have been moved to next year along with China's World Indoor Championships. The 2020 European Athletics Championships, which were due to take place in Paris in August, have been cancelled.

The Major League Baseball season has been put on hold. There have been suggestions put forward, which have been supported by high-ranking health officials, that the season could start as early as May if all 30 teams were to play matches in the Phoenix area of Arizona in stadiums with no fans.

US President Donald Trump is keen for a return to action and said recently: "We have to get our sports back. I’m tired of watching baseball games that are 14 years old."

South Korea's KBO League is in pre-season and will start on May 5 with US TV companies said to be interested in broadcasting matches.

Commissioner of the NBA Adam Silver has said the league is not in a position to make a decision on a restart yet but everything is being considered, including playing games beyond late June.

Promoter Eddie Hearn says he is working towards the end of June and early July. He wants to stage a number of shows across a six-week extravaganza in a "unique environment." Many big summer fights have already been postponed.

The ECB have confirmed no professional cricket will take place until at least July 1. This means the Twenty20 Blast will be rescheduled along with the upcoming Test series between England and the West Indies. The T20 World Cup is still scheduled to go ahead from October 18 in Australia.

The Hundred, the ECB's city-based franchise competition, was due to begin in July but it has been postponed for a year due to a reluctance to stage the new event in empty stadiums.

The Tour de France, which was due to run between June 27 and July 19 is now scheduled to begin on August 29 and finish on September 20 (the same day that the Road World Championships is due to start) but that is now in doubt. The Giro d'Italia and the Vuelta a Espana will both follow on as yet unconfirmed dates.

Live darts is continuing with a number of home-staged events currently taking place. The PDC has rescheduled its flagship Premier League to resume on July 30 in Birmingham with the playoffs now taking place in Sheffield, rather than London's O2 Arena, on October 15.

The Open Championship has been cancelled but the three other majors have been moved with the US PGA Championship set to take place between August 6 and August 9, the US Open between September 17 and 20, a week before the Ryder Cup, and the Masters in mid-November.

The Charles Schwab Challenge could be the first PGA tournament to return on June 11, while low-level events on the Cactus Tour and Outlaw Tour are still going ahead.

The NHL is on pause and won't return until at least mid-May. Reports have suggested they could head straight to the playoffs.

Reports have suggested the F1 season could start in Austria on the weekend of July 3-5.

Nascar have announced their season will restart at Darlington Raceway in South Carolina on May 17 and will then run midweek events as well as weekend races in a bumper return.

Australia's NRL will return on May 28. Super League cancelled their annual Magic Weekend on April 21 and at present there is no return date for the sport in Europe.

All leagues in England below the Premiership have been cancelled. Top tier clubs have expressed a willingness to finish the season with June 27 reported to be the provisional start date with all games played behind closed doors at Twickenham.

The Betfred World Snooker Championship has been reschuduled to start at the Crucible on July 31. World Snooker supremo Barry Hearn has said that preference is to stage the event with a "full crowd as usual" pending government advice.

If that is not possible, "careful consideration" will be given to other scenarios including a reduced crowd, playing behind closed doors or a further postponement. Dates are yet to be confirmed for qualifying.

The Tour Championship remains scheduled to go ahead the week before the Sheffield marathon.

The French Open will now take place near the end of September but the US Open, which is hosted in New York which has been hit badly by coronavirus, will be discussed in June. Professional tennis won't return until at least July 13, but two exhibition events are scheduled.

Ultimate Tennis Showdown will start on May 16 and will run for five weeks with ten matches scheduled every weekend.

David Goffin has been confirmed as an entrant in France, while a lower-level event is set to take place in Germany from May 1 with Dustin Brown set to feature.

A tournament between Britain's top eight players has also been discussed as a possibility after the cancellation of Wimbledon.

President of the sport, Dana White, has announced UFC 249 will go ahead in Florida on May 9 after a stoppage of two months. Tony Ferguson v Justin Gaethje is the headline act, while cards are also expected to take place on May 13 and May 16.