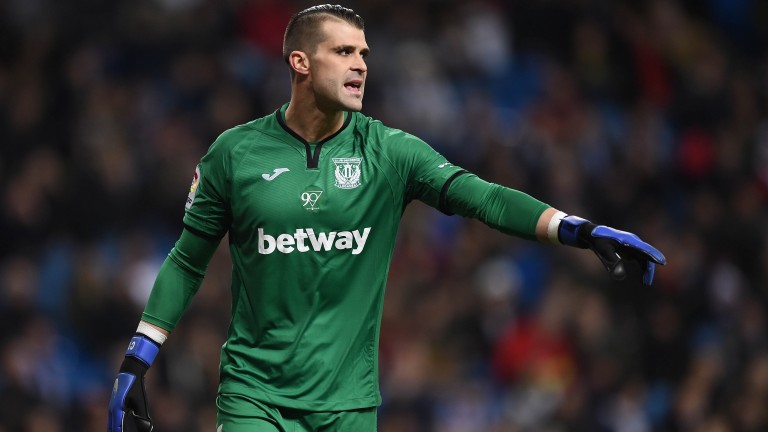 Leganes goalkeeper Ivan Cuellar might have an easier time of it in the second leg
Denis Doyle
1 of 1
By Steve Davies UPDATED 4:11PM, JAN 16 2019

A second-string Real Madrid put Leganes to the sword 3-0 in the first leg of their round-of-16 Copa del Rey tie and they can manage their way into the quarter-finals by avoiding defeat in the return.

Draws aren’t a Real speciality – their matches historically have tended to produce plenty of goals.

But this is an occasion where the stalemate looks a big runner with Real cursed by a colossal injury crisis and just keen to avoid any nervy moments before Saturday’s league showdown with Sevilla.

Madrid rivals Leganes don’t score many goals anyway – they are the joint-lowest scorers in La Liga with just 17 to their name from 19 fixtures – and have probably given up on this tie following their three-goal loss at the Bernabeu.

Survival is the only aim for ex-Southampton boss Mauricio Pellegrino, whose team have admittedly improved after slipping to the bottom going into October. But they are still set for a tough spring, especially now that top scorer Guido Carrillo has picked up an ankle injury.

Real were hell-bent on avenging a shock quarter-final loss by Leganes last season and their comfortable first-leg triumph suggests they are safe in that department.

Karim Benzema is the latest addition to Santiago Solari’s injury list which only adds to the coach’s frustration. Expect them to do enough to get through.

FIRST PUBLISHED 8:00PM, JAN 15 2019
This is an occasion where the stalemate looks a big runner with Real cursed by a colossal injury crisis