Conte's Chelsea should be crowned champions at Hawthorns

Battling Blues can edge their way to victory 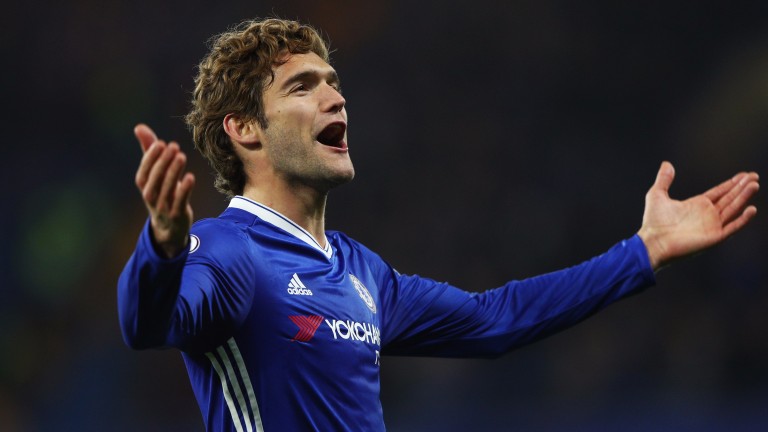 Chelsea have three chances to get the win that will see them crowned Premier League champions but the Blues can seal the deal at the first opportunity.

They can wrap up the title with two games to spare at the Hawthorns and there is not much tension surrounding the destination of the title with home dates to follow against Watford and Sunderland. But getting the job done quickly will allow Antonio Conte's leaders time to celebrate before turning their attention to the FA Cup final on May 27.

The Blues have been focused for months and responded brilliantly to the potential wobble created by April defeats to Crystal Palace and Manchester United. Three straight league wins by an aggregate 10-2 and an FA Cup semi-final success over Tottenham at Wembley have kept Chelsea firmly on course for a domestic double.

Bookmakers are understandably keeping Chelsea short for their trip to out-of-form West Brom, whose manager Tony Pulis has promised his team will do their "damnedest" to make life difficult for the champions-elect.

Nobody would expect different from a Pulis side but Chelsea have the class and defensive nous to overcome the physical threat posed by Albion from set-pieces and allow their talented forward players to find a path to maximum points.

It has been the Chelsea way on the road this season and backing them to win in a match featuring under 3.5 goals looks the way to go.

That bet selection has landed in ten of Chelsea's 18 league away matches this season and in ten of their 12 victories. Excluding matches against the obvious top six Chelsea's win record with under 3.5 goals rises to ten in 13 road trips.

Conte's Chelsea have totally controlled their last couple of matches - convincing 3-0 wins over Everton and Middlesbrough - with a total of only four shots at Thibaut Courtois allowed.

The Belgian is protected by a well-organised back three, efficient wing-backs who can do both sides of the game and at least one holding midfielder, which can sometimes be a double defensive pivot.

That allows the front three of Diego Costa, Pedro and Eden Hazard the platform to pick apart better teams than West Brom, although the Blues needed 76 minutes to break through against the Baggies in a 1-0 success at Stamford Bridge in September.

West Brom had one shot on target that Sunday lunchtime and have one win in nine Premier League matches. They had also lost four on the spin before last week's 2-2 draw at Burnley, a scoreline which ended a run of five league matches without a goal.

All three of West Brom's home matches finished in 1-0 defeats and before notching at Turf Moor likely starting striker Salomon Rondon had gone 19 matches without a goal.

Recommendation
Chelsea to win and under 3.5 goals
1pt 21-20 Coral

Team news
West Brom
Matty Phillips remains sidelined but Jonny Evans should overcome a twisted ankle and Hal Robson-Kanu could be fit enough for the bench.

Key stat
Only Burnley (17), Hull (15) and Middlesbrough (14) have scored fewer league goals from open play than West Brom's 18 this season.