Consistent Trotters set for another win 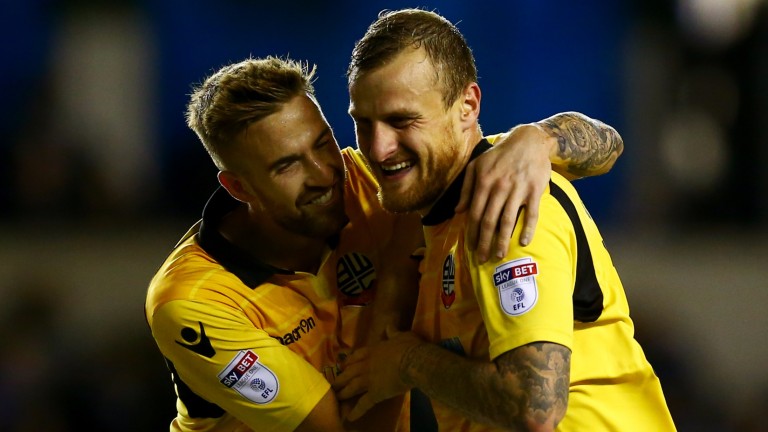 Bolton have off-field issues to address but they have responded impressively to last season’s relegation and can move back into the Sky Bet League One automatic-promotion berths by defeating Gillingham at the Macron Stadium.

The Trotters have won seven home games in a row and look value at 3-4 to extend the sequence against the Gills, who are 14 points worse off and 16th in the table.

Finances are still tight at Bolton and will probably remain that way until a deal can be reached between co-owners Dean Holdsworth and Ken Anderson.

Anderson has been in talks to become the sole owner of the club but the situation has dragged on and may have an impact on their promotion push, given that a transfer embargo remains in place.

Bolton have been fortunate with injuries – 11 of their players have featured in at least 75 per cent of their league games this season – and manager Phil Parkinson would welcome the chance to strengthen the squad in January.

For now everything is going according to plan and the small squad has worked in their favour with a strong core of players excelling week-in week-out.

The centre-back partnership of Mark Beevers and David Wheater – players with a wealth of Championship experience – has given them a great platform to build on and Bolton have by far the best defensive record in League One, conceding just 12 goals in 20 games.

Jay Spearing and Josh Vela are excelling in midfield but the star turn is Zach Clough. The attacker, now free from injury, is showing the qualities which attracted several top-flight scouts when he burst on to the scene as a 19-year-old with six goals in ten appearances in the second half of the 2014-15 Championship campaign.

Clough has weighed in with seven goals in his last eight league appearances and is again attracting the interest of clubs from higher divisions.

Whether Bolton can keep him beyond the January window remains to be seen but he is their most likely matchwinner and could make the difference against improving Gillingham.

A recent shortening of the Gills’ injury list has contributed to an improvement in results with four wins in the last six games.

Their enigmatic striker Jay Emmanuel-Thomas is back on song, netting four goals in the last six games, and he was among the scorers as Gills posted an impressive 3-0 success at home to promotion-chasing Rochdale last time out.

However, the Kent outfit, who lost in the FA Cup first round, may not have been helped by a 16-day break between the Rochdale match and the trip to Bolton and are likely to suffer their seventh away defeat of the campaign.

Bet on this game at www.soccerbase.com

Team news
Bolton
No fresh injuries are reported but Mark Howard, Mark Davies and Darren Pratley are out long-term.
Gillingham
Billy Knott (hamstring) is a doubt and Chris Herd (ankle) is unlikely to feature. Both Lee Martin and Aaron Morris are out with long-term injuries but Ryan Jackson could return after a layoff.