Confident United should advance in style

Celta look out of their depth 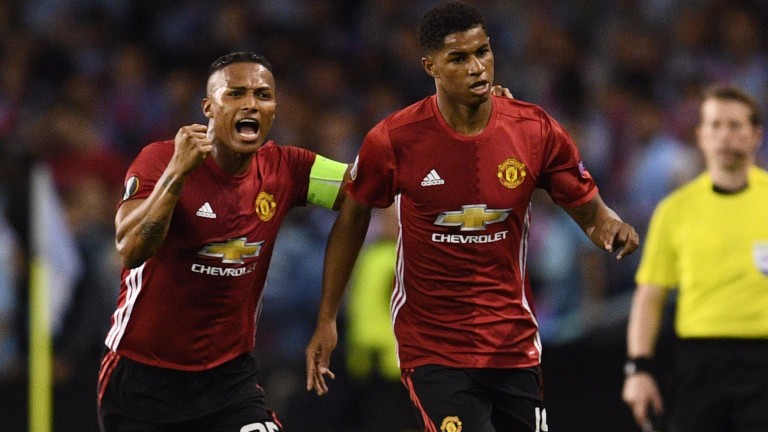 Marcus Rashford (right) and Antonio Valencia of Manchester United celebrate during the first leg
David Ramos
1 of 1
By Dan Childs 7:57PM, MAY 10 2017

Manchester United are two matches away from a trophy double as well as Champions League qualification and they can pass the first test by defeating Celta Vigo in the second leg of their Europa League semi-final.

Manager Jose Mourinho was quick to play down the significance of United's 2-0 loss at Arsenal on Sunday, which brought an end to an undefeated sequence of 25 Premier League games.

But he has talked up the importance of the Europa League during the last few weeks and is calling on the Old Trafford crowd to play their part in helping United seal a place in the final in Stockholm on May 24.

United have a 1-0 lead to defend, courtesy of a fine free-kick from Marcus Rashford, and they could have been in a more comfortable position after dominating the first leg for long periods.

Celta, competing in their first European semi-final, looked overawed and appeared to lack confidence. And their mood will not have improved after Sunday's 3-0 loss at Malaga, their fifth successive defeat.

Going into one of the biggest matches in their history, Celta are playing as poorly as at any stage of the season and they cannot expect any favours from a United team who are becoming astute at defending a lead.

Mourinho's teams have often been characterised as good front-runners and United are no different. All of their eight defeats this season have come in matches in which they have conceded the first goal.

Celta's task looks massive but they will give it their best shot and they only have to look back as far as the round-of-32 tie against Shakhtar Donetsk for a source of inspiration.

The Galicians lost the home leg 1-0 to Shakhtar but responded superbly in the away leg, winning 2-0 after extra-time.

Celta are the only team this season to have kept a clean sheet away to Shakhtar and they will have to defend just as diligently against United.

However, they have played with little discipline in recent months - they have kept one clean sheet in their last 11 games - and they are likely to struggle to cope with a United side set up well to play on the counter-attack.

Since Zlatan Ibrahimovic's injury, Mourinho has usually opted for a pacy attack with Rashford through the middle and Jessi Lingard, Henrikh Mkhitaryan and Anthony Martial vying for positions on the flanks.

The set-up has work well in some big games including a 2-0 victory against Chelsea and a 0-0 drawing at Manchester City.

Celta have shown they are not in the same class as those two and are likely to bow out without getting on the scoresheet.

Team news
Man Utd
Zlatan Ibrahimovic is out long-term and Luke Shaw (ankle) misses the rest of the season.

Celta Vigo
Giuseppe Rossi is sidelined with a long-term knee injury but Carles Planas (knee) is back in contention.