Confidence should be flowing through the Citizens in Champions League

City can rule in Germany to seal place in last 16 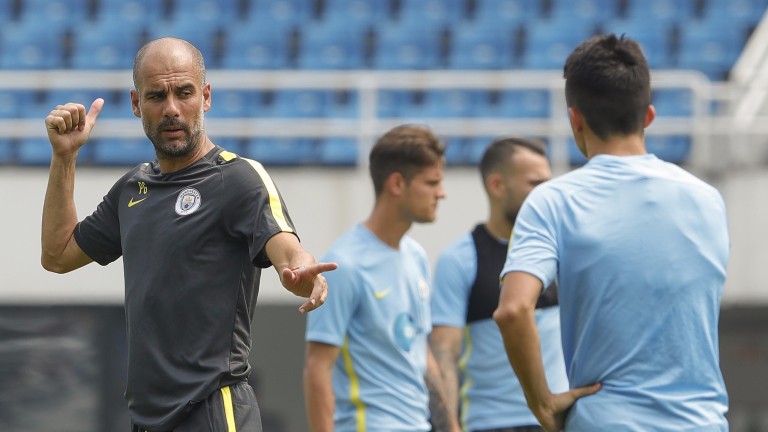 Manchester City take on Borussia Monchengladbach in Germany knowing a draw will probably be enough to secure a passage to the Champions League knockout stage but they can leave nothing to chance and should collect all three points.

Only victory for Gladbach would keep their qualification hopes alive but a draw could leave the door ajar for Celtic to stay in the hunt for third place in the unlikely event that they beat Barcelona in Glasgow.

City’s position looks a lot healthier thanks to their well-deserved 3-1 victory at home to Barcelona earlier this month.

They responded impressively to Lionel Messi’s first-half strike and could have beaten the Catalans by a wider margin had they been more clinical in front of goal. Pep Guardiola’s side have also improved in the Premier League – collecting seven points from their last three games – although the star of Saturday’s 2-1 victory at Crystal Palace (two-goal midfielder Yaya Toure) is not part of their Champions League squad.

Team news
Monchengladbach
Julian Korb and Christoph Kramer are suspended and Patrick Hermann (ankle) is out for the rest of the year.

Toure’s return to the fold should assist City’s domestic challenge but the Ivorian is unlikely to be missed with David Silva likely to step into his shoes and a fully-rested Ilkay Gundogan expected to return to the side.

City should be close to full-strength but the same cannot be said of their opponents who are restricted by suspensions to holding midfielder Christoph Kramer and right-back Julian Korb.

Key forwards Raffael and Thorgan Hazard have recently returned from injuries but neither has scored since September and they have been unable to prevent Gladbach from sustaining successive league defeats at Hertha Berlin (3-0) and at home to Cologne (2-1).

Eleven of Gladbach’s 12 Bundesliga points have been secured at Borussia-Park but they have won just one of their last six home games in all competitions and recent results are a far cry from last season when they won 13 of their 17 home league games.

Andre Schubert’s side have slipped to 13th in the Bundesliga – the lowest they have been all season – and it is hard to see how they are going to find a performance good enough to trouble a City side who may be starting to believe in their chances of winning the competition.

City reached high standards in the home win over Barca by winning the midfield battle and counter-attackng with pace and precision, and would be a dangerous side for any of Europe’s elite to face over two legs.

However, they do need to improve their European away performances after producing below-par displays at Celtic (3-3) and Barcelona (0-4).

Celtic were the first of City’s opponents to expose them by playing an aggressive, high-pressing game.

Other teams followed suit and City went through a sticky patch by following up ten straight wins with six games without a victory.

However, City’s confidence has been largely restored by their November revival and they should step on to the pitch with a spring in their step.

Belief in City’s chances has seeped through to the betting with the away win shortening from 17-20 to 5-6 but the revised price still looks tempting enough.