Comeback kings Wigan can put on another late show

Castleford could crack against Warriors in the second half 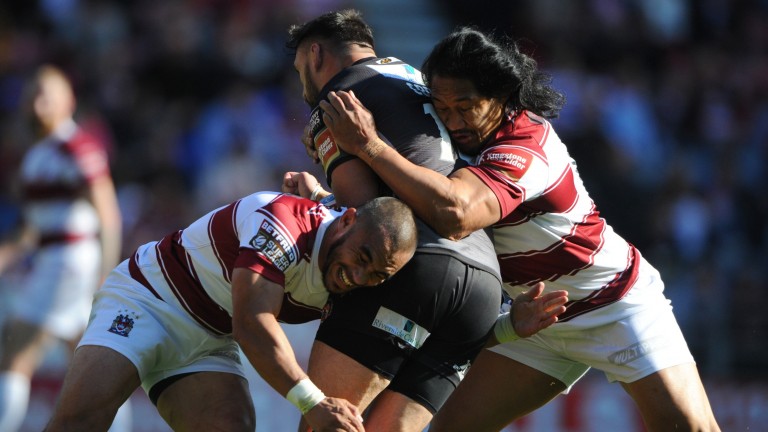 Wigan have been the comeback kings of the Betfred Super League in the past fortnight, remarkably recovering when all seemed lost at Catalans and Leeds.

The Warriors battled back from 21-0 down to win 32-23 in the south of France before turning an 8-0 deficit into a 9-8 victory in the final ten minutes at Headingley.

Whether such scrambled successes are a good sign for Shaun Wane’s side, or whether the last two games have been an exercise in papering over the cracks, remains to be seen but Wigan have been installed as odds-on favourites to keep their winning run going against Castleford.

The Tigers, who have won seven of their last eight matches themselves, are 6-4 to repeat last season’s two victories at the DW Stadium.

Cas receive a four-point handicap start, which seems fair enough, but the layers may have given punters a golden opportunity by offering 4-5 against Wigan scoring the final try of the evening.

The Warriors have posted the final four-pointer eight times in ten outings in 2018 whereas the Tigers have done so just twice in nine attempts – in their last two games, against the bottom two Catalans and Huddersfield.

It may also be worth taking the 15-2 against the hosts rallying from a half-time deficit to win.

As well as doing so in the comebacks against the Dragons and Rhinos, Wigan have been trailing after 40 minutes at home to Widnes and Wakefield before eventually prevailing by double-digit margins.

If they win, the Warriors have an outside chance of ending the night at the Super League summit.

They would need Huddersfield to produce an 12-1 upset at St Helens and the Giants are without the suspended Danny Brough.

Saints are still missing talisman James Roby due to a rib injury and he’s joined on the sidelines by injured Zeb Taia and banned Mark Percival.

Matty Costello and James Bentley are in line for debuts and with the layers setting the handicap line at around 20, this looks a match that punters should sit out.

The same can be said for Wakefield’s trip to Salford. The 8-13 Wildcats will be purring after downing Saints last Sunday but the Red Devils should also be confident after winning at Huddersfield last time out.

It was the first time Salford had won on the road in Super League for almost a year and Ian Watson’s team are 6-4 to back that up with a home win over Wakefield.