Colombia have the skills to pile misery on Japan

Blue Samurai may be put to the sword 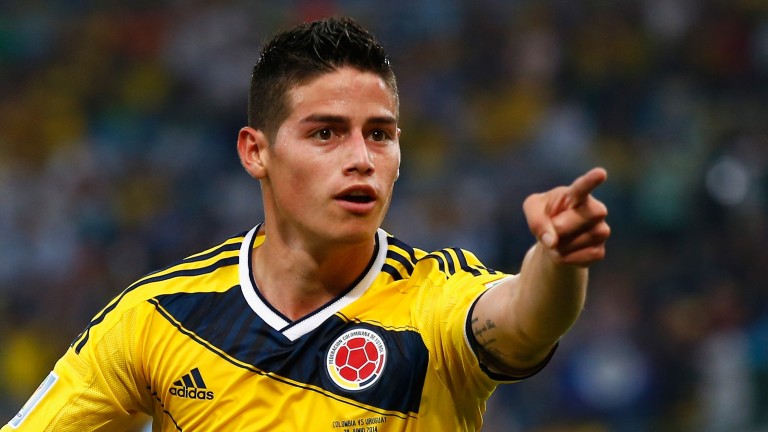 South American sides have suffered disappointing results in the World Cup but Colombia can lay down a marker with a victory over Japan.

None of the Conmebol sides have managed more than one goal, with Brazil and Argentina being held to surprise draws, Peru going down 1-0 to Denmark and Uruguay leaving it late before seeing off Egypt 1-0.

However, it would be wrong to jump to any conclusions regarding the South American contingent, particularly as two opposition goalkeepers were named man of the match in those four matches  and Peru were the better side against Denmark.

Each game should be judged on its own merits and Colombia, quarter-finalists four years ago, look set to justify their status as odds-on favourites after James Rodriguez was declared fit.

Rodriguez was one of the standout players of the last World Cup and has regained his best form at Bayern Munich following a frustrating spell at Real Madrid.

The relationship between Rodriguez and striker Radamel Falcao could be the difference, although Jose Pekerman is not solely reliant on his two big hitters to start with a bang.

Juan Cuadrado of Juventus is capable of making thrusting runs down the right flank and there is promise in the young centre-back partnership of Davinson Sanchez and Yerry Mina.

Sanchez had a solid enough season at Tottenham and Mina has been snapped up by Barcelona, so both are clearly held in high regard as they look to protect vulnerable keeper David Ospina.

The goalkeeping position looks the weakness for Colombia and was an issue in qualifying, but Japan hardly sparkled themselves on the road to Russia, finishing one point ahead of Saudi Arabia.

Japan have since changed their manager, with Akira Nishino replacing Vahid Halilhodzic, and how that will impact their level of their performance remains difficult to predict.

The Blue Samurai suffered 2-0 warm-up defeats to Ghana and Swirtzerland with a three-man defence before Nishino reverted to a back four in their 4-2 success over Paraguay last time out.

Nishino has also recalled a number of experienced players who were dumped by Halilhodzic, including Keisuke Honda, Shinji Okazaki and Shinji Kagawa, with the aim to return Japan's style of play to a more traditional technical approach.

Halilhodzic was all about the counter-attack, a tactic Honda said was "shameful", but whatever the plan it is clear Japan have struggled at World Cups apart from the one they hosted with South Korea in 2002.

Discounting home advantage, Japan have played 13 matches at the World Cup and won just twice. Four years ago they were awful, picking up just one point and crashing out of the competition with a 4-1 defeat to Colombia.

It's unlikely to be so simple this time around but Colombia should still come out on top.

Colombia
Team news
James Rodriguez has returned to full training after muscle fatigue. Left-back Frank Fabra had to withdraw from the squad due to injury.

Strengths
The connection between James Rodriguez and Radamel Falcao is likely to determine Colombia's fate. When on song they are a wonderful combination with Rodriguez supplying Falcao.

Weaknesses
David Ospina has not convinced in an Arsenal shirt and has also regressed for his national team. However, the other options play their club football in Mexico are relatively untried at this level.

Key man
Rodriguez sparkled four years ago, winning the World Cup Golden Boot and earning a move to Real Madrid. He looks set for a free role and finished the season in fine form for Bayern Munich.

Strengths
Team harmony has improved since unpopular coach Vahid Halilhodzic was sacked and so has the talent in the squad after a number of their bigger names returned under new boss Akira Nishino.

Weaknesses
A lack of defensive cohesion has resulted in the team struggling for clean sheets. Nishino has not had sufficient time to get all of his ideas across and Shinji Okzaki has been injured.

Key man
There are bigger names in the side but centre-back Maya Yoshida of Southampton could be crucial. Japan need to tighten up at the back with Falcao one of the world's most deadly finishers.

Key stat
Japan have not kept a clean sheet in their last 13 matches.