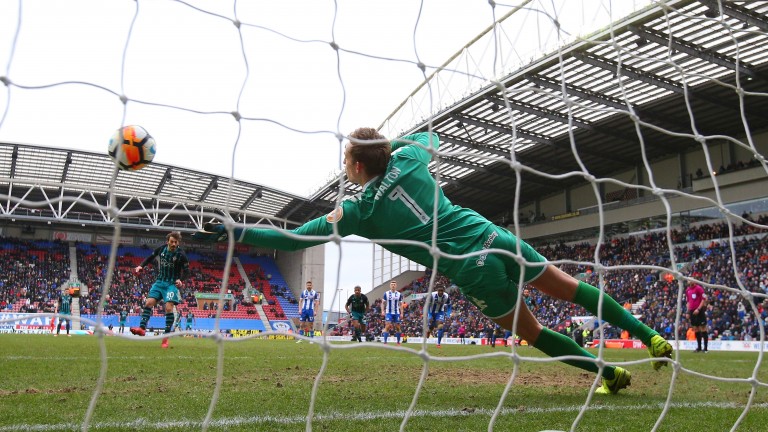 Portsmouth earned a well-deserved 1-0 win at Walsall on Saturday but just two days later they face a significant step up in class against Sky Bet League One title favourites Wigan.

The Latics' run to the FA Cup quarter-finals allowed Blackburn and Shrewsbury to ramp up the pressure in the race for automatic promotion.

However, Wigan have shown no sign of wilting as they set about comfortably winning their games in hand and returning to the top of the table.

The scorers in Friday's 3-0 home win over Oldham – Will Grigg, James Vaughan and Nick Powell – are class acts at this level while Max Power and Michael Jacobs pose a goal threat from midfield and defender Chey Dunkley, 30-1 to score first, has chipped in with three goals in his last six appearances.

Dunkley, along with centre-back partner Dan Burn and goalkeeper Christian Walton, has also been racking up the clean sheets recently and the victory over Oldham was Wigan's fourth straight win to nil.

They are worth backing to extend that sequence to five games against a Portsmouth side who remain in the playoff hunt despite a poor run at Fratton Park in 2018.

Pompey won their last home game 3-0 against Oxford but they had taken just two points from their previous six on their own patch and they have struggled to lay a glove on the stronger teams in the division.

Kenny Jackett's side lost 1-0 at home and away to Rotherham, were beaten 1-0 and 2-0 by Shrewsbury, and failed to trouble the scorers in defeats at Blackburn (3-0) and Scunthorpe (2-0).

Wigan have looked in control of the division for most of the season and another smooth victory looks likely for ex-Pompey boss Paul Cook on his return to Fratton Park.

Wigan
Will Grigg was substituted at half-time against Oldham on Friday due to a tight calf but should be fit to start.

Key stat
Nineteen of Wigan's 24 league wins this season have been to nil.