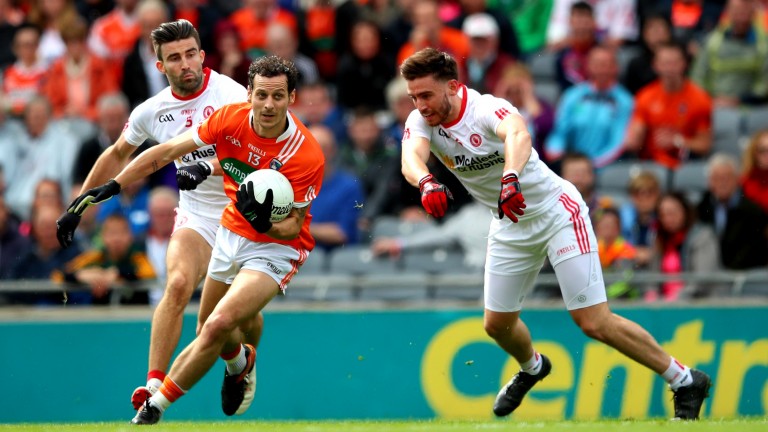 Jamie Clarke: the Armagh attacker could pose problems for the Dongeal defence
Â©INPHO/James Crombie
1 of 1
By David Jennings 8:00PM, JUN 1 2019

Monaghan played straight into Cavan's hands in the Ulster football quarter-final, but don't expect Armagh to fall into the same trap. Kieran McGeeney's men look great value to progress to a provincial decider for the first time since they took the title in 2008.

Time and time again Monaghan carried the ball into the tackle at Breffni Park. They got to the 45-metre line and were bottled up by a blanket Cavan defence who were licking their lips at the prospect of a turnover and a counter-attack.

That's what Cavan do. They suck teams in and spit them out down the other end of the field. They have no problem conceding possession once it is outside the scoring zone but when teams enter that area they pounce.

Armagh have an entirely different style to Monaghan. They kick the ball as much as they can and it worked a treat for most of their duel with Down in their Ulster opener.

Armagh should have won that game comfortably before extra-time  but they showed terrific character to come out on top as they belatedly earned a provincial win for the first time under McGeeney.

Rian O'Neill and Jamie Clarke scored ten points between them against Down and if Stefan Campbell is given the nod to start their attacking unit will be packed full of scores.

O'Neill has been a revelation this season. His eight-point haul in the Down outing was one of the best individual displays of 2019 and he will relish the prospect of enhancing his reputation against Cavan. He's two-footed, deadly accurate and clever.

Armagh's kicking style has the potential to pose Cavan problems, something they never had to deal with against Monaghan, and McGeeney's men look great value to cause a minor shock and progress to an Ulster final against Donegal or Tyrone.

Kildare surely have the more scope for improvement and can take care of Longford at the second attempt in the Leinster quarter-final replay.

The Lilywhites played in fits and starts and looked vastly superior at various stages in the drawn encounter, but old failings came back to haunt them and they couldn't get the killer scores when required.

Indeed, they were lucky to escape unscathed and could have lost the tie in extra-time.

Adam Tyrell was terrific last Sunday, scoring 1-7, and if David Hyland and Ben McCormack can bring their A-game, Kildare should have too many aces up front.

Longford continue to be without a whole host of their key men and Kildare can cash in. It ought to be more straightforward than the betting suggests.