City on fire as Arsenal and Chelsea slip up

Palace find the net at last 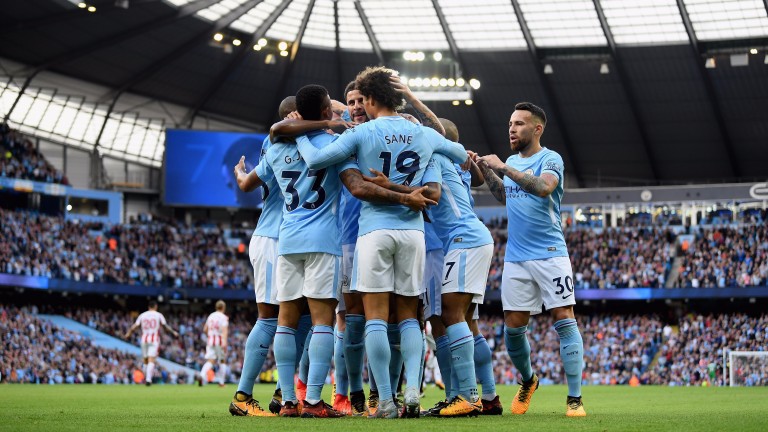 Manchester City are just 2-5 with Betway to win the Premier League after their 7-2 demolition of Stoke at the Etihad.

A brace from Gabriel Jesus was accompanied by strikes from Raheem Sterling, David Silva, Leroy Sane, Bernardo Silva and Fernandinho for the Citizens who took full advantage of Manchester United’s 0-0 draw at Liverpool.

The Manchester duo started the day joint-top on 19 points but City edged two points clear after smashing the Potters.

United were dominated by Liverpool at Anfield but the Reds failed to make the breakthrough with United cat David de Gea in top form.

The Red Devils are out to 4-1 while champions Chelsea are also on the drift after they slumped to a 2-1 defeat at Crystal Palace.

It was Palace’s first points and goals of the season but they remain bottom of the table.

The Eagles – who were 17-2 to beat the Blues – remain favourites to go down while Huddersfield shortened for the drop after they lost 2-0 at Swansea.

Bournemouth have also been clipped to slip back into the Sky Bet Championship after they lost 1-0 to Tottenham at Wembley.

Christian Eriksen got the goal for Spurs who are 14-1 for the title after securing their first league win of the season at their temporary home.

Arsenal are out to 40-1 for the title after they lost 2-1 at 9-2 shots Watford with Tom Cleverley scoring an injury-time winner, while Andy Carroll was sent off for West Ham in a 1-1 draw at Burnley.