Wait until next season to judge Jose Mourinho at Spurs 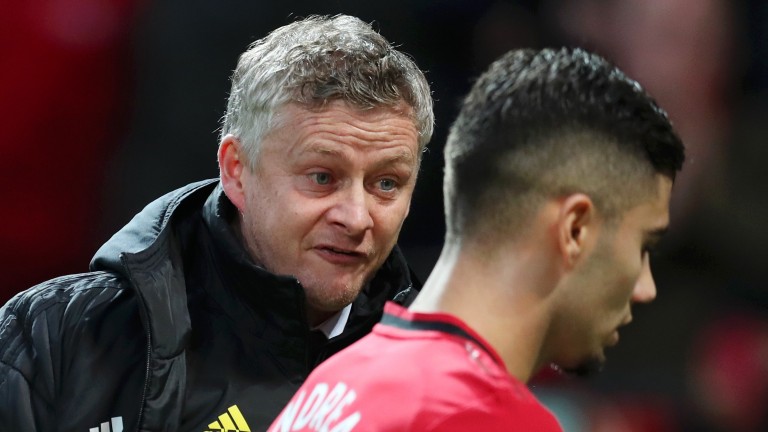 There’s a project going on at Old Trafford and now’s the time for United to show patience, not pile more pressure on him.

Three defeats in four in the Premier League isn’t great and clearly there has been a hugely negative reaction to the defeat at home to Burnley.

But who was man of the match? It was Nick Pope, the Burnley keeper, who basically kept his side in it.

This is all hard to take for United fans, especially with Manchester City and Liverpool going so well, but this is not the time for them to lose faith in what Ole is trying to do.

It’s easy to say get Ole out, get a new man in and spend £500 million on new players with no guarantees of success.

We saw Liverpool falling away for years and years, managers came and went, they spent fortunes and nothing changed until Jurgen Klopp arrived. All of a sudden it’s working.

It has been a struggle for Solskjaer, especially now with Marcus Rashford injured. He would probably have liked to introduce the likes of Danny James and Mason Greenwood more gently but circumstances have dictated the need to play them more and more and it’s tough for these kids.

There will be one or two youngsters who maybe aren’t good enough and Solskjaer will be identifying them. But you can’t just keep getting the cheque book out and paying £100m for a player who’s worth £30m or £40m because that tells you the board have no faith in the project. And then what’s the point?

This is a hit-and-miss squad who aren’t going to be giving nine out of ten performances every week.

I’m not saying they don’t need a couple of players, of course they do. But they are still in the hunt for the top four, still in the FA Cup and still in the Europa League. They are a million miles away from winning the league – but so is everyone else.

If they fall away and finish 12th then you would have to consider whether or not the experiment is working but this is a project and sometimes you’ve got to have patience.

Let’s not forget they gave Liverpool a far better game last week than many teams have and they will be a better group next season for what has happened this term.

Spurs need to bolster their forward line with Harry Kane injured, but will they struggle to attract a top-quality striker?

Jose Mourinho knows he needs a new frontman with Harry Kane out for a while but they aren’t easy to come by in the transfer window.

Heung-Min Son and Lucas Moura can do a job up top on their own but for all the threat they offer, they haven't got the same presence as Kane in the box which teammates are looking for.

They need someone getting on the end of chances and maybe someone like Luka Jovic is the answer. I know there has been an interest.

Real Madrid seem to be saying that they want him to bed in there rather than go anywhere, yet he’s obviously struggling in Spain.

There were big expectations when he came from Germany, where he was prolific in a really good Frankfurt frontline in a league where there are lots of goals scored, but La Liga is tougher.

It might be a good bit of business for Madrid to say to Spurs: "You can have him until the summer, see if you can get him up and firing and then we’ll have him back".

Gareth Bale continues to be linked with a Spurs return. Do you think it’s the right move?

Gareth Bale might be a short-term solution to Mourinho’s goalscoring woes but I wouldn’t be breaking the bank to bring him back.

I’m a big fan of Bale, I think he’s a wonderful player and Spurs fans would welcome him with open arms.

But you’ve got to ask yourself what would you be getting for a vast sum of money. Is he on the pitch enough to make the investment worthwhile?

You look at Lionel Messi and Cristiano Ronaldo and they are on the pitch for 90 per cent or more of the season. Bale? Probably nearer 50 and he’s not getting any younger.

If it was the right deal at the right price then without a shadow of a doubt you’d snap him up. But if you were expecting to have to fork out £300k a week or more then I’d be looking elsewhere.

Do you think Jose Mourinho was the wrong man for the Spurs job?

It’s far too early to be wondering whether or not Mourinho was the right man for the Tottenham job – judge him next season.

Mourinho had to inherit a dressing room which had been together a long time under previous manager Mauricio Pochettino and one which required a shake-up.

We know the likes of Jan Vertonghen and Christian Eriksen are on their way and it looks like Danny Rose’s time might be up after their reported bust-up. But that won’t bother Mourinho who has Ben Davies as cover. Left-back isn’t Spurs' problem area.

Then he’s looking at Eric Dier and Harry Winks and wondering which, if either, of those two is going to put their stamp on the central midfield role. And how much faith does he have in Tanguy Ndombele?

There have been clearly been words said about him and it’s not an easy environment for the French star. He’s found the move from France hard by the looks of it, he has got to learn a new language and I think the issues with him are more mental than physical.

But Mourinho will tell it as it is to these players because he is looking for a spark.

He’s got the issue with Kane’s injury which he could never have foreseen and he knows he needs two or three new players to come in.

For Mourinho now it’s about getting through the season and building on the signs of promise – Dele Alli’s form, for example, and he’ll probably like what he sees in Giovani Lo Celso, who can pick a pass.

But he’ll also want to win some silverware and I have no doubt that he will have targeted the FA Cup. Southampton away is tough tie but Mourinho will chuck everything at it.

How much credit should Steve Bruce get for Newcastle's performances this season?

Newcastle have got 30 points under Steve Bruce after 24 matches – that’s six more than Rafa Benitez had at the same stage of last season.

Rafa was a hero on the terraces because he came across as a friend of the fans but Newcastle are doing better under Bruce. I think he deserves untold credit for what he’s doing.

He had a really tough act to follow and it was a job that no one really wanted after Benitez and given the financial constraints at the club.

Benitez was loved by the Geordies and did a good job to keep them in the Premier League. Fans took to him because he was a little bit on their side – he’d have sly digs at Mike Ashley and that went down seriously well with supporters.

But he went, Steve was offered it and you can see why he took it. He’s a Geordie lad, he’s a Newcastle fan, his heart is there and six months on he’s doing better than Rafa was last season if you look at his stats.

He has tried to play more attacking football and realised very quickly that the players he inherited were set in their Benitez ways. He doesn’t have enough creativity going forward to dominate matches but he’s tried different systems with three at the back, they are well organised, look a goalscoring threat from set-plays and all told he’s done a marvellous job.

He’s looking to bring in a few more attacking players and needs a goalscoring midfielder and a centre-forward. You can’t argue with Joelinton’s effort, he puts a shift in and you can’t fault his attitude but sometimes you have to question his technical ability and he isn't going to get you 15 to 20 goals.

But the bottom line is that Bruce is doing a superb job when many people thought he wouldn’t, or couldn’t.

Do you think Newcastle's Allan Saint-Maximin could make the step up to a top-six club?

The one thing you need to really make it as a star with a top club is consistency and I’m not sure Saint-Maximin has that just yet.

I like him a lot and think he offers something really different.

He’s a very exciting player and you can see why the Newcastle fans have taken to him. But the one thing which has surprised me and a lot of other people is his work-rate.

He’s not always on the front foot and getting the ball in the final third and nor will he be in this Newcastle side. So that means he’s often had to track back 40 or 50 yards to help out and win the ball back, and over the course of a game that’s quite demanding.

When Kevin Keegan had David Ginola at Newcastle he’d have said we don’t want you defending. No disrespect but you can’t. We’d rather have you in the top half, creating chances and winning us games and he did that very often.

I’m sure Steve Bruce would love it for Saint-Maximin not to have to come back and help out the full-back but the way Newcastle play he’s got no option.

He’s a great talent with a bright future – once he shows us he can do it every week.