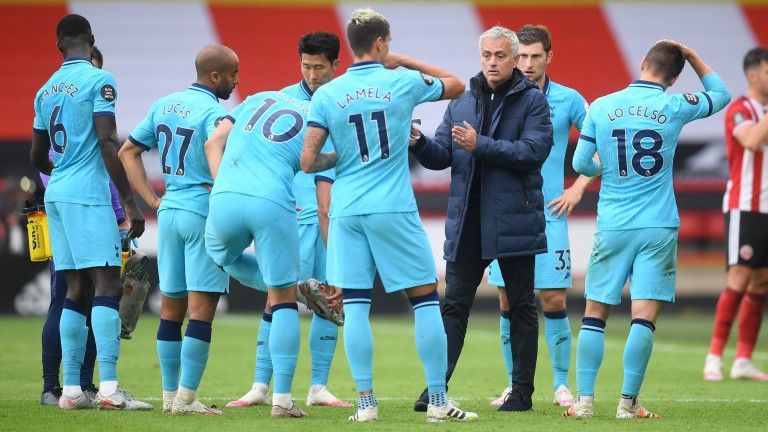 In any football team, you need one or two pianists and the rest of them have to carry the piano.

Jose Mourinho has the opposite at Tottenham and that has to be rectified in the next transfer window if they are to challenge for a Champions League spot next season.

He needs to have a big clearout because he has loads of players who all do the same thing and if he doesn't get rid of some of them then they will fall short again.

I'm talking about all those number ten players. Dele Alli, Erik Lamela, Steven Bergwijn, Lucas Moura. They can't all be accommodated and they need players who are going to win the ball.

It is no good asking these number tens to suddenly become number sixes. They've never done it and they aren't going to start doing it now.

People might point to Moussa Sissoko but he's always played his best football when playing on the right and he links up well with Serge Aurier.

It can also benefit the side that he can help Aurier defensively because that's not his strong suit, so Sissoko is probably not the answer to Mourinho's problems.

I don't think Tanguy Ndombele is either. He's another piano player. He's not a ball-winner and he will have had his eyes on the role Alli plays and certainly doesn't have the presence that Tottenham need in the centre of midfield.

Many people might say that Manchester City prove that you don't need to be physical but they still have the ability to win the ball. And they don't lose it.

Liverpool have a dynamic front three, but look at all the players they have who do all the donkey work. Players like Jordan Henderson and Fabinho are crucial to the team's success and Spurs just don't have those sorts of players.

Harry Winks is a tidy midfielder but he needs support. They have been linked with Southampton's Pierre-Emile Hojbjerg, who is an intelligent player and could help, but there must be better players out there.

And that is the type of player they need.

I remember when I was at Sheffield Wednesday and Carlton Palmer was brilliant for me. He used to tell me he would do my running and he was superb.

When people doubted whether he should play for England, I used to tell them how invaluable he was. He was great for me and John Sheridan, who was a great passer of the ball.

At Marseille, I had people like Jean Tigana and Didier Deschamps to do all that donkey work.

If Spurs are going to play in Mourinho's preferred manner of breaking the game down and then hitting teams on the counter attack, they are going to need different players.

If you take Liverpool and City out of the equation, there are a lot of teams of similar ability in the Premier League.

Tottenham could challenge but we have seen Leicester have a good season apart from the last few weeks, Wolves continue to make progress and I would expect Everton to improve next year too.

Spurs beat Arsenal last week and Mourinho would have been delighted to have hit them on the counter attack because the Gunners dominated the ball particularly in the second half.

It seems to be the way he wants to play but he needs the personnel to play in that manner. What he definitely doesn't need is any more piano players.

Jordan Pickford just seems to be one of those players who gets it in the neck every week.

He's had a few shaky moments lately but suddenly everybody thinks it means he should not be Gareth Southgate's first choice as England goalkeeper.

I have to say I have been impressed with Burnley's Nick Pope. He's played well lately, has been patient after injury and he has the potential to be a very good keeper.

But it should not be forgotten that Pickford has never let England down and Gareth will surely bear this in mind when it comes to who he wants to pick between the posts.

There would certainly be some merit in picking Pope for some friendlies before the Euros but it's far too drastic to put the Everton keeper on the scrapheap.

His confidence would be hit and Gareth might still need him. It would be a massive over-reaction.

Harry Maguire got nutmegged by Junior Stanislas the other day and there's a hysterical reaction that an England centre half can't allow that to happen and he should be dropped.

You have to look at players' performances over a period of time. Take the season as a whole.

I'm sure when Jordan looks back at the season he will be honest enough to say that five or six goals were due to his mistakes but it should be about what he has done over the campaign as a whole and he'll probably think he has had a decent season.

When Southgate considers that and and thinks about what Pickford has done for him in the past, I'm sure he will see no need to do anything drastic. But if Pickford doesn't shine for England, that might be a different story.

Sticking with Magpies would be good for Allan Saint-Maximin

While you can have too many flair players in a team, I love to see players who do something different and I like Allan Saint-Maximin.

His performances have been eyecatching even if he would surely love to play further up the pitch as he did at Nice before he moved to Newcastle.

Sometimes he may be guilty of displaying his skills in dangerous areas but Steve Bruce seems to take that into account and they get on well.

He's 23 and his name is starting to be linked with other clubs. I see Manchester United have been mentioned and maybe there's a bit too much agent talk going on, but I don't think now is the time for him to be worrying about that.

He could get a move to somewhere like Manchester City and he might have the chance to play in a more advanced position but his chances would be severely limited.

That would be pointless. You have to play. I'll say it time and again.

What would be the point of starting a couple of FA Cup matches and making 20 appearances as a substitute?

He's in a much better place at Newcastle and I would urge him not to make the move too soon.

It's fine when you are 36 and you just want to be part of something or you are looking after your bank balance. He's got most of his career ahead of him, so this is no time to waste it on the bench.

The transfer window has been extended to accommodate a domesstic-only period, which should be a good idea.

I just don't think we are going to see a lot of activity.

A lot of clubs are going to have to be so careful with their finances. Outside the Premier League, there may be lots of players available on free transfers but surely there won't be much activity.

I've spoken about the changes needed at Tottenham and while Chelsea have spent a bit of dough already, I can see Liverpool and City making only minor changes.

Having five substitutes looks a bit excessive. I would prefer it if we stuck to three, but at least the drinks breaks are being done away with. It was getting like an NFL game with four quarters.

But if you've used five substitutes, then that means two more appearance fees and win bonuses to find and that cannot be ignored for clubs for whom every penny will count.