Chisnall primed to finish with a flourish

But Wade set for more misery 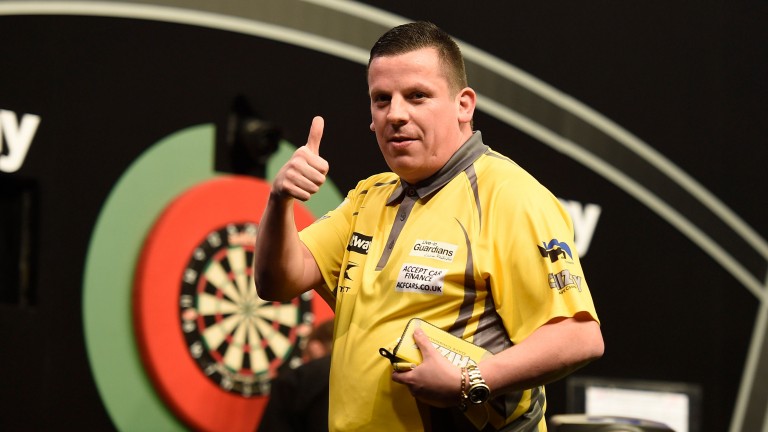 James Wade's Betway Premier League campaign has come to a fairly tame end and it’s quite possible he will be overpowered by a resurgent Dave Chisnall in Aberdeen this evening.

Wade sits at the bottom of the eight-man field having lost eight of his last 11 matches, including a 7-5 defeat by Dave Chisnall in Week Five.

Chizzy has won his last three meetings with the left-hander and should make that four given the way he is playing. He’s almost certainly left it too late to qualify, but Chisnall is on a hot six-match unbeaten streak and he hasn’t averaged under 99 in any of those matches.

Chisnall is the 5-6 favourite but a better approach might be the handicap market and hacking Chizzy to cover a 2.5-leg line at 5-4. Because the St Helens chucker throws first, it would require only one break in his favour and every other leg a hold of throw to result in a 7-4 scoreline.

Just when Adrian Lewis had got himself into playoff contention, the double world champ has gone off the boil with four straight defeats.

During those four losses he has averaged under 95 with his 180s and doubles deserting him.

That doesn’t mean he can’t come out and flick the switch tonight and make a mockery of 11-4 odds – and he has beaten Phil Taylor during the current campaign, triumphing 7-4 in Week Six.

And, there’s no doubt that The Power hasn’t been anything like his old self in this year’s Premier League though he does seem to have got better as the weeks have progressed, and on current form, Taylor has to get the nod.

Four of six Premier League matches between Peter Wright and Barney have ended in draws and this could well be another close affair.

Wright, who is playing better than ever, won the European Grand Prix on Sunday, whitewashing Michael van Gerwen in the final.

That form makes him hard to resist against anyone, but certainly against Van Barneveld who has lost four in a row.

They love the Dutchman in Aberdeen and he’ll want to sign off in style, so back him to exceed a 98.5 average in what should be a high-quality affair. Barney has cleared 99 in seven of his last nine outings and there won’t be many scrappy legs against a player as on-song as Snakebite.

They met on the opening night of the Betway Premier League, sharing the spoils in a 6-6 draw, and they bring down the curtain on the regular season.

Anderson says home advantage will be a help, although Van Gerwen produced a TV-high average of 123.4 against Michael Smith so clearly has happy memories of the GE Oil & Gas Arena.

Both men have qualified but the pressure to get a point to top the table could well be on Van Gerwen should Wright have won in the preceding contest.

Either way, a relaxed Anderson looks overpriced at 2-1 to hit most 180s. They have each hit 50 this season.