Tight end Tyler Higbee could get a touchdown 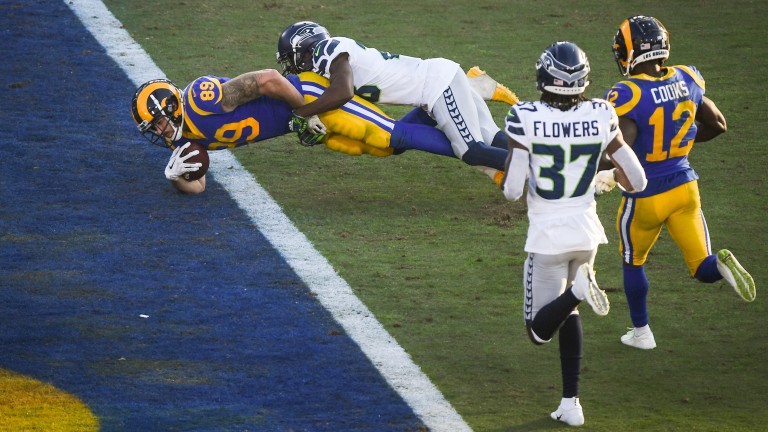 Tyler Higbee of the Los Angeles Rams scores a touchdown against the Seattle Seahawks
Harry How
1 of 1
By Phil Agius UPDATED 8:09PM, NOV 18 2018

Kansas City's visit to the LA Rams promises to be one of the games of the season for a number of reasons.

It features the teams who entered Week 11 as the first and third favourites for the Super Bowl in a sizzling match-up most neutrals would love to see in the big game itself in Atlanta in February.

They are two of the most attractive teams in the league, who headed into the week as the highest-scoring teams in the NFL.

And it's also set to be a historic fixture in betting terms as most Vegas outlets report the total points line of 63.5 is the highest they have ever posted for an NFL clash. And still they are not finding many punters willing to bet the under.

That's no surprise. The visiting Chiefs have been irresistible in quarterback Patrick Mahomes's first season as a starter. Running back Kareem Hunt is a real powerhouse in his second season and speedy wide receiver Tyreek Hill and tight end Travis Kelce give the Chiefs some top-notch targets.

Kansas City should be confident they can outscore anyone and the evidence backs it up - their sole defeat was a thrilling 43-40 loss on the road at New England (when they rallied from a 24-9 deficit to lead in the fourth quarter).

And that makes them the more attractive handicap bet getting a start of more than a field goal - it would have covered in every game this season, but then again they haven't played the Rams yet.

LA have looked a formidable force under young head coach Sean McVay. Quarterback Jared Goff is a different player entirely to the struggling rookie he was two years ago, running back Todd Gurley will reach 1,000 yards for the season when he gets 12 against the Chiefs and former Patriot Brandin Cooks has brought a new dimension to their receiving corps this season.

The Rams have taken a hit with the loss for the season of shifty receiver Cooper Kupp, but they have other players who can step up and tight end Tyler Higbee could be in line to get some of the targets that would have gone Kupp's way. He is a big price to score at any time in a game with a record points line.

The Rams in theory have a much stronger defence and they will be on their way to victory if defensive phenomenon Aaron Donald and fellow defensive tackle Ndamukong Suh can regularly disrupt the interior of the Chiefs offensive line.

But the LA defence have conceded 901 total yards and 76 points to the Saints and Seahawks in their last two games, so it seems they can't rely on their defensive strength to the extent that looked likely earlier in the season.

The Rams gained a boost when the game, which was originally scheduled to take place in Mexico City, was switched to LA due to the poor state of the pitch at the Azteca Stadium.

But they do not yet get a huge advantage at their new base after moving from St Louis and the handicap line would have shifted a lot further if it was switched from a neutral venue to the Chiefs' Arrowhead stronghold.

All in all it should be a cracker and the Chiefs can be supported to match the Rams score for score.

Team news
Kansas City Receiver Sammy Watkins (foot) has had limited practice this week. Center Mitch Morse (concussion) and safety Eric Berry (heel) are still on injury report.
LA Rams Receiver Cooper Kupp is out for rest of the season after tearing his left ACL against Seattle. Receiver/return man Pharoh Cooper may be activated off the injured reserve list.