Chiefs have the tools to take one final scalp 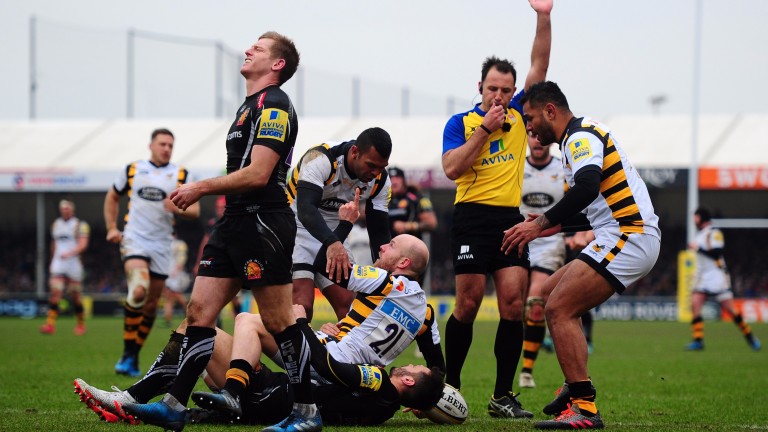 Wasps and Exeter finished the Premiership regular season level on points so it's fitting that bookmakers can barely split the teams as they prepare to meet in the season finale at Twickenham.

Wasps topped the table thanks to their greater number of wins but Exeter are the narrowest of favourites after taking out reigning English and European champions Saracens in last week's semi-final.

The Chiefs have shown the best form in the closing stages of the season, with a record tally of eight consecutive bonus-point wins followed by last week's epic triumph.

Wasps were Racing Post Sport's ante-post selections to lift the trophy but while they yet again showed their attacking flair in their semi-final victory over Leicester last week, there were signs of vulnerability in areas that Exeter look well-equipped to exploit.

The Chiefs were well on top in the set-piece, frequently drawing scrum penalties from Sarries including the one that provided the platform for their winning try. Their line-out worked well too while Wasps looked shaky in that area.

Where Exeter also cashed in was in the intensity and physicality of their play, and a similar approach could pay dividends against Wasps, who were put off their stride by a dogged Tigers outfit. Exeter will know that if they managed to get in Saracens' faces they can do the same to Wasps.

Both finalists needed late tries last week to secure their Twickenham berth and Wasps had the last word in both this season's Premiership meetings - a 25-20 home win in round one and a 35-35 draw at Sandy Park - as well as in last season's European Champions Cup quarter-final, in which Wasps fly-half Jimmy Gopperth sealed a comeback win with the last kick of the game.

Losing Kurtley Beale to injury is a huge blow for Wasps but they still have pace and lethal finishing in their backline in the shape of Christian Wade, Elliot Daly and Willie le Roux, with both Gopperth and Danny Cipriani there to pull the strings.

All those star names clearly have the X-factor to steal it but Exeter look to have the more solid and structured approach as well as the confidence to set about the task of stopping Wasps, and the best bet could be backing the Chiefs to be ahead at half-time. The betting is so close that there is little between the half-time and full-time prices.

Two absorbing semi-finals should have set the scene for a high-octane final and there are lethal finishers on both teams.

Wasps winger Christian Wade, the season's top scorer with 17 tries, is 6-4 to get on the scoresheet, while another player sure to be backed, Exeter's Thomas Waldrom, is a 5-2 shot.