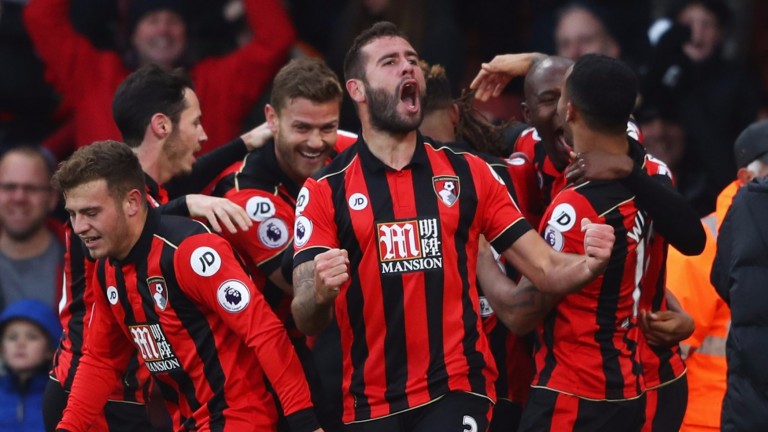 Steve Cook of Bournemouth celebrates with his teammates
Michael Steele
1 of 1
By Aaron Ashley 9:04PM, DEC 4 2016

The Cherries, who had been 2-0 and 3-1 down, scored three goals in the last 15 minutes to end Liverpool’s 15-game unbeaten run, while the Dons – who were 3-0 down just after the hour mark – scored four goals in the last ten minutes to escape an FA Cup shock at the hands of National League North strugglers Curzon Ashton.

Sadio Mane and Divock Origi had put Liverpool in charge at the break after they capitalised on two errors in two minutes from Cherries’ goalkeeper Artur Boruc, and although Callum Wilson halved the deficit from the penalty spot Emre Can soon blasted Jurgen Klopp’s Reds into an all-too-familiar two-goal lead.

Curzon Ashton traded as short as 1-250 with Sky Bet after Adam Morgan’s hat-trick put them in full control but a frantic three-minute spell saw Wimbledon wipe out the hosts’ lead.

The Dons – three divisions and 81 places above Nash in the footballing pyramid – completed the comeback when Tom Elliott headed home his second of the match in injury time and put an end to one of the FA Cup’s most extraordinary afternoons.

Elsewhere, there were FA Cup upsets for Barrow at Bristol Rovers and Cambridge against Coventry.

United were condemned to their third consecutive league stalemate and bookmakers eased them out to 3-1 from 9-4 to secure a top-four finish while Chelsea were cut to 5-4 for the Premier League title.