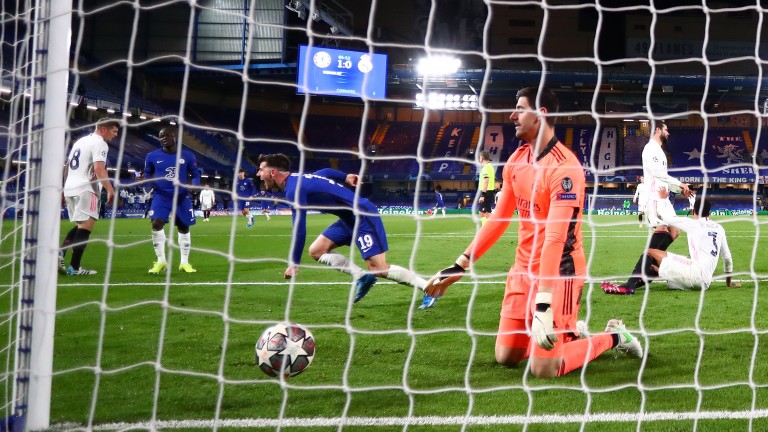 Mason Mount's goal made certain of Chelsea's progress to the Champions League final
Clive Rose
1 of 1
By James Milton 12:40PM, MAY 11 2021

Arsenal
David Luiz, Granit Xhaka and Pablo Mari have been ruled out for the Gunners. Emile Smith Rowe (hamstring) faces a fitness test.

Chelsea's 3-1 Premier League defeat at Arsenal on Boxing Day was part of a run of five defeats in eight league games for the Blues which culminated in the departure of manager Frank Lampard.

As Bukayo Saka's misdirected cross sailed into the net to put the Gunners 3-0 up inside an hour at the Emirates Stadium, few Chelsea fans would have been anticipating a glorious end to their 2020-21 campaign.

Less than five months later, however, Thomas Tuchel's side are third in the table, having been ninth at the time of Lampard's sacking, and they are looking forward to Saturday's FA Cup final against Leicester and a Champions League showdown against Manchester City at the end of the month.

A commanding second-leg win over Champions League semi-final opponents Real Madrid was followed by an injury-time winner in Saturday's 2-1 league victory over the table-topping Citizens and Chelsea look solid favourites to see off the Gunners.

Weekend defeats for Leicester, West Ham and Tottenham gave the Blues some breathing space in the race for the top four and Tuchel may well rest a couple of key players for the cup final against the Foxes.

However, the German's impact means there is confidence flowing through the whole Chelsea camp and whatever 11 he selects should be good enough to beat inconsistent Arsenal.

Gunners boss Mikel Arteta declared after the home win over Lampard's Blues that "it doesn't get any better than this" and, unfortunately for the Spaniard, he has been proved right.

Arsenal's hopes of salvaging a disappointing campaign rested on winning the Europa League but a goalless draw in last week's semi-final second leg against Villarreal means they are set to miss out on European football for the first time in 25 years.

Pierre-Emerick Aubameyang hit the post twice but Arteta's side went out with a whimper against the well-drilled Spaniards and they may also struggle to break down Chelsea's in-form defence.

Emile Smith Rowe, Nicolas Pepe and Willian scored excellent goals in Sunday's 3-1 win over West Brom, whose relegation was confirmed by the defeat, but the Gunners can expect fewer chances in west London.

Chelsea's clean sheet against Real last week was their 11th shutout in 12 games at Stamford Bridge under Tuchel and they recorded their seventh 2-0 home win in 11 against the Spanish champions.

A similar scoreline looks likely against Arsenal and Chelsea will want to maintain their high standards before the FA Cup final.

Even before Saturday's win at City, bet365 had cut the Blues from 7-1 to 5-1 to win next season's Premier League, leapfrogging Liverpool and Manchester United in the betting. Arsenal, meanwhile, are 66-1 shots for the 2021-22 title and that gulf in class may well be exposed at Stamford Bridge.

Chelsea have kept 11 clean sheets in their last 12 matches at Stamford Bridge.

FIRST PUBLISHED 12:40PM, MAY 11 2021
Mikel Arteta declared after the home win over Lampard's Blues that "it doesn't get any better than this" and he has been proved right