Gunners can capitalise on Chelsea absences 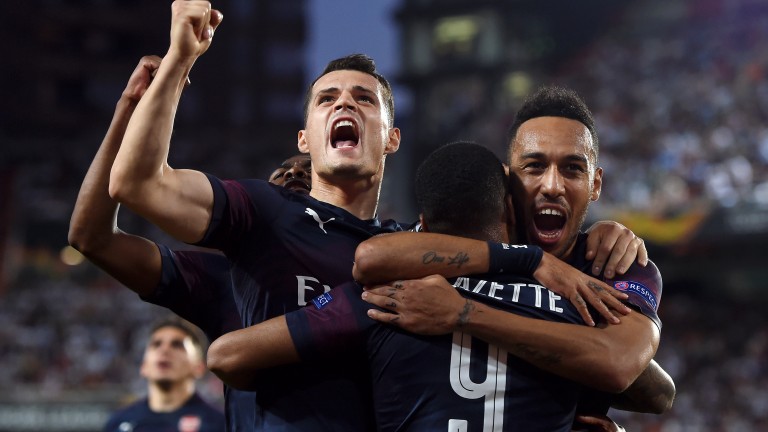 Arsenal would secure Champions League football next season by lifting the Europa League trophy
Alex Caparros
1 of 1
By Mark Langdon 8:00PM, MAY 28 2019

The journey to Baku has been a long one in more ways than one but the Europa League prize will be worth it for whoever comes out on top of the all-Premier League final between Chelsea and Arsenal.

This will be game number 15 in this season's competition for both London sides and the most defining fixture for Unai Emery and Maurizio Sarri.

For Sarri it would finally put an end to his coaching career trophy drought and for Europa League specialist Emery it changes the entire dynamic of his first season with Arsenal as success brings with it a place in next term's cash-rich Champions League.

Emery has already won the competition three times with Sevilla and as outsiders Arsenal may offer slightly more bang for the buck, particularly as their need is the greater given a return to Europe's top table is available if they can upset the odds.

This is a huge deal for Arsenal, who, unlike Chelsea, have a trophy parade planned and in a match which will quite probably be decided by tight margins their more potent attack may prove pivotal.

The head-to-head this season reads one win each - Chelsea were 3-2 victors at home in August before Arsenal gained their revenge with a 2-0 success in January - and there were only two points between them in the final Premier League standings, so expect a close tussle. 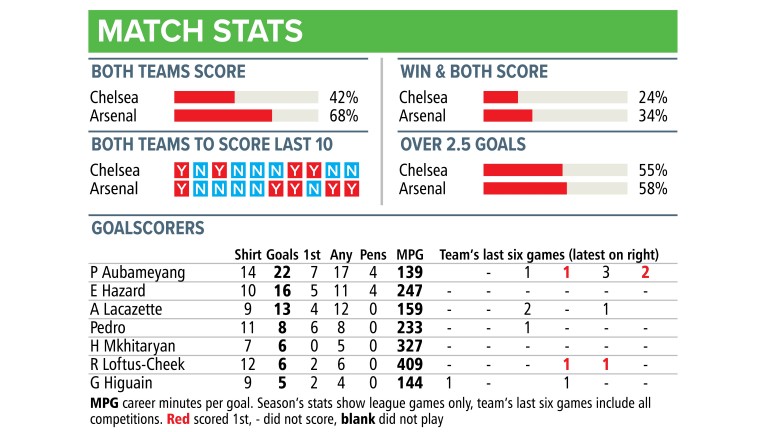 Chelsea were comfortably superior on expected goal ratings, although one reason why Arsenal can make the most from more limited chances is the quality of front pair Alexandre Lacazette and Pierre-Emerick Aubameyang.

Lacazette was named as Arsenal's player of the season, while Aubameyang claimed a share of the Premier League's Golden Boot alongside Sadio Mane and Mohamed Salah.

Between the deadly duo they notched 35 Premier League goals and another 13 came in the Europa League. Aubameyang sizzled in the semi-final success over Valencia, grabbing a hat-trick at the Mestalla.

Arsenal's range of performances can be quite exhilarating, or even  frightening, for their supporters, but when it came to the crunch in the Europa League, Emery's outfit showed they can defend properly and they kept clean sheets in both victories over Napoli.

The Italians were limited to only four attempts on goal across the 180 minutes and it was no coincidence that key defender Laurent Koscielny was available to feature in all four triumphs over Napoli and Valencia.

French linchpin Koscielny was absent during the poor performances in defeats to Leicester and Everton, which proved costly in Arsenal's top-four pursuit, while the other shocker in recent months was a 3-2 loss at home to Crystal Palace.

It's fair to say Carl Jenkinson and Konstantinos Mavropanos, starters in a bizarre team selection that day, are not first-choice for such an important contest.

One man who should be is Petr Cech, the Czech veteran who is playing his last match before hanging up his gloves. Cech has been a Europa League regular and deserves to keep that spot for the final despite being on the verge of a switch to a technical role at former club Chelsea.

Cech's departure won't hurt Arsenal in quite the same manner as that of another man preparing for what will probably be his farewell fixture in Baku.

If Chelsea are to justify favouritism it will probably come down to the magic of Real Madrid target Eden Hazard, who should be plying his trade in the latter stages of the Champions League rather than the Europa League.

Hazard is Chelsea's best player by some distance.

He was the Premier League's top assist maker with 15 and also scored another 16 times. It was also Hazard who scored the decisive penalty as Chelsea squeezed past Eintracht Frankfurt in a semi-final shootout.

Nobody else in the Chelsea ranks reached double figures for goals in the Premier League which should be of concern to Sarri, as is Hazard's sorry record away from Stamford Bridge. His last Chelsea goal outside west London came at Watford on Boxing Day.

N'Golo Kante is a doubtful starter and the injured Antonio Rudiger's recovery pace will be sorely missed defensively given Arsenal's speedy strikers.

Chuck in the absence of Ruben Loftus-Cheek and Calum Hudson-Odoi and this Chelsea side, although deserving to be favourites, lacks dynamism in key areas.

They have still lost only three matches since a humbling 6-0 thrashing at Manchester City on February 10, a result which came during a woeful period when Manchester United knocked them out of the FA Cup and Chelsea were also battered 4-0 at Bournemouth.

Chelsea have recovered and should they lift the Europa League it would have to be registered as a successful season after they finished third as well as also reaching the Carabao Cup final.

Sarri, however, has been unable to shed his nearly-man tag and if Chelsea lose he, like all of the supporters heading to Azerbaijan, could find it a long and difficult trip back from Baku.