Chelsea star Eden Hazard has the skills to light up Wembley 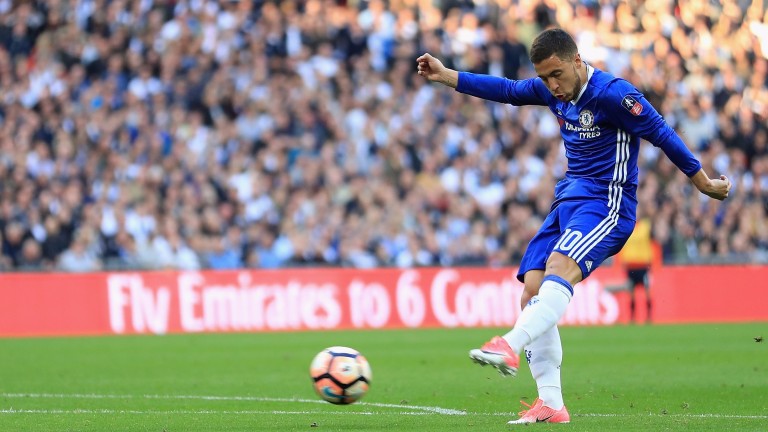 The best players often excel on the big stage and Chelsea's star man Eden Hazard looks a strong contender to be the man of the match in the FA Cup final.

Hazard is bet365's market leader at 6-1 but that still looks a decent price for a heat which strongly favours attacking players.

Over the last 17 years only one man of the match award has gone to a defender - Chelsea left-back Ashley Cole in the 2009 final.

A few central midfielders have achieved the accolade in that time but they have all been offensive players.

Steven Gerrard was the standout performer with two goals as Liverpool drew 3-3 against West Ham in the 2006 final before winning a shootout, and Frank Lampard was man of the match in 2007 as Chelsea defeated Manchester United 1-0 after extra-time.

The vast majority of cup final MVPs have been attackers – either forward-looking midfielders, wingers or centre-forwards.

And there might not be many of those type of players on show this weekend.

Antonio Conte has often favoured a 3-5-1-1 formation in recent weeks, deploying Tiemoue Bakayoko as an extra midfielder and relying on Hazard and either Oliver Giroud or Alvaro Morata to penetrate opposing defences.

Given the Blues' dreadful performance in a 3-0 loss at Newcastle last Sunday, Conte may be tempted to recall Willian and revert to a 3-4-2-1 set-up.

But Hazard is the only truly world-class offensive player in their likely line-up.

He has been less productive this term but has the skills and personality to light up another big occasion.

United are likely to field more attacking players but there are doubts over how they will perform.

Occasionally brilliant midfielder Paul Pobga has not sparkled since his second-half display at Manchester City last month and Alexis Sanchez has been fairly anonymous since the FA Cup semi-final against Tottenham.

Romelu Lukaku has been their most consistent attacker but there are doubts over his fitness after a layoff of nearly three weeks.

United are experts at stopping the opposition playing and do not always do it fairly.

Their yellow-card count of 64 is the fifth-highest total in the Premier League and 22 more than Chelsea's. The Blues' tally of 42 bookings was the lowest in the top flight.

Ashley Young has been United's most regular offender, collecting seven Premier League yellow cards, and looks value in the market on the first player to be booked.

Young was one of four United players cautioned in their semi-final victory over Tottenham and he could have his hands full coping with the pace of Chelsea's right wing-back Victor Moses.