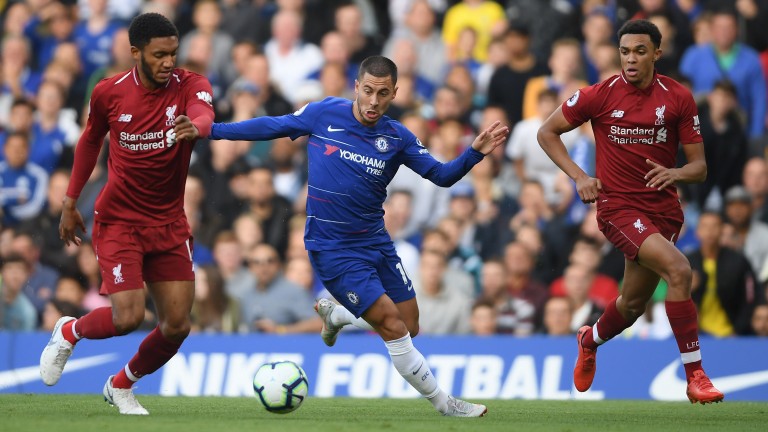 Chelsea's Eden Hazard has made a stunning start to the Premier League season
Mike Hewitt
1 of 1
By Mark Langdon 5:34PM, OCT 19 2018

Chelsea boss Maurizio Sarri insists Eden Hazard can fulfil all of his footballing dreams at Chelsea, including winning the Ballon d’Or, but this season he may have to settle for being voted the Premier League’s finest.

Hazard, 7-4 favourite to be named the PFA Player of the Year with Hills, has been the standout player in England this term and the supposed Real Madrid target will be aiming to further enhance his reputation when Chelsea host Manchester United.

Sarri said: “Eden is a fantastic player. It will be very important if he will remain with us.

A January switch to Real Madrid is an unlikely 12-1 with Sky Bet and one reason for Hazard to stick around at Stamford Bridge is the potential to claim a Premier League Golden Boot award.

Seven-goal Hazard leads the way by two from more usual suspects Sergio Aguero and Harry Kane and can be backed at 6-1 with Betfair to be the top flight’s top marksman.

Hazard’s excellent form has helped Chelsea make an unbeaten start to life under Sarri and the Blues are 66-1 with bet365 to go through the Premier League campaign unbeaten. Manchester City and Liverpool are 12-1 and 28-1 respectively.

Manchester United have already suffered three league defeats and find themselves out to 100-1 to win the title and 7-2 just to finish in the top four.

Jose Mourinho is much shorter – a 13-8 shot at best and odds-on in places – to be the first top-flight manager to leave his current position and Betway rate the Portuguese 16-1 to be sent to the stands on his return to the Bridge.