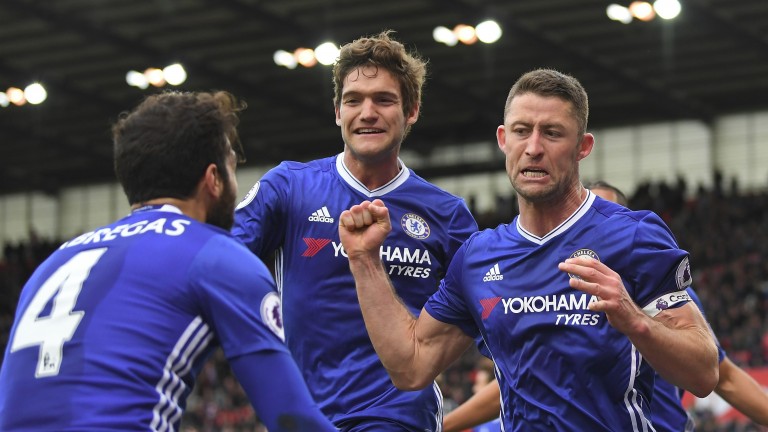 Chelsea are 1-20 to win the Premier League title after they opened up a 13-point gap over nearest rivals Tottenham and Manchester City courtesy of a late 2-1 victory at Stoke on Saturday.

Gary Cahill popped up with an 87th-minute winner for the Blues which extended the leaders’ winning run to five games in all competitions and offered little encouragement to the chasing pack.

Arsenal’s hopes of Champions League qualification took a big hit as they were beaten 3-1 by West Brom at the Hawthorns.

Two goals from Craig Dawson and one from Hal Robson-Kanu sealed the points for the Baggies, who consolidated eighth place. Arsenal stay fifth and have been eased to 11-4 for a top-four finish.

The Gunners’ sixth defeat in nine games has ramped up the pressure on Arsene Wenger. Hills go 2-7 that the Frenchman is not in charge at the Emirates next season and 5-2 that he is.

Sunderland remained rooted to the foot of the table after drawing 0-0 with Burnley.

The Black Cats are seven points adrift of safety but gained a point on third-bottom Hull after the Tigers lost 4-0 at Everton.

Crystal Palace eased their relegation fears thanks to an own goal from Troy Deeney which gifted them a 1-0 win at home to Watford, while Leicester moved a step closer to survival as their revival under Craig Shakespeare continued with a 3-2 victory at West Ham.