Chelsea charge unlikely to run out of juice at Riverside 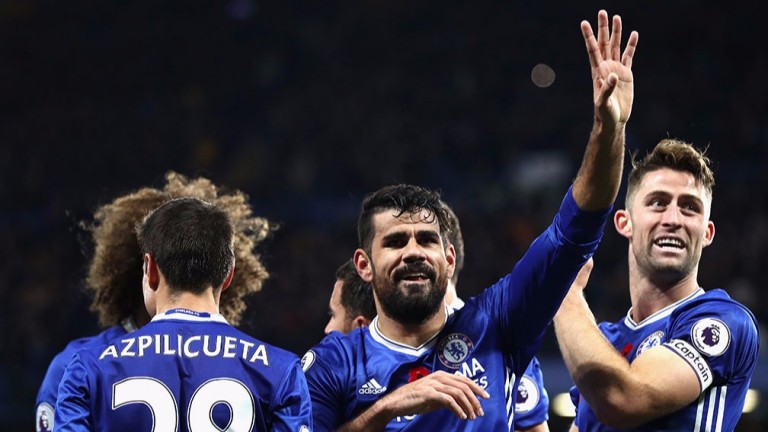 Chelsea are on the march under Antonio Conte and Middlesbrough are unlikely to stop the Blues from claiming top spot in the Premier League with victory at the Riverside.

The switch to a 3-4-3 formation has seen Chelsea become rampant, winning all five league outings to nil and by an aggregate score of 16-0 since moving to a back three in the wake of a poor 3-0 loss at Arsenal.

Hull, Leicester, Manchester United, Southampton and Everton have been brushed aside to suggest those who were quick to rule Chelsea out of the title race following a winless September may have done so in haste.

Chelsea are at least getting full respect from bookmakers this afternoon and they deserve to be short-priced favourites despite the long trip north.

However, the runaway triumphs are unlikely to continue for much longer and a single-goal victory may be the pick of the prices.

It is difficult to see Chelsea slipping up given the way they demolished Everton 5-0 last time out in a show that veteran commentator John Motson said was the best Premier League performance he had seen.

Team news
Middlesbrough
George Friend is doubtful with Fabio the man most likely to come in should the left-back miss out. Daniel Ayala is ruled out but Gaston Ramirez returns from suspension.

Chelsea
Antonio Conte has a fully-fit squad to choose from after Diego Costa returned to training on Wednesday. Cesc Fabregas and Kurt Zouma are also back in contention.

The front three of Diego Costa, Eden Hazard and Pedro are in electric form, while Victor Moses’s surprise run at right wing-back has been one of the more unlikely stories of the campaign.

David Luiz looks more comfortable in a back three and Everton were limited to one shot off target in 90 minutes as Nemanja Matic and N’Golo Kante continue to lay the foundations in central midfield.

Middlesbrough have shown enough this season to suggest they can be competitive despite winning only twice since gaining promotion to the top flight.

Aitor Karanka seems happier sending his team out not to lose rather than trying to force the issue and that defensive discipline has allowed Boro to leave Arsenal and Manchester City with a point.

Boro, so tight defensively in last season’s successful Sky Bet Championship campaign, have conceded only three times in their last five matches which is a fine effort considering that includes trips to the Emirates, Etihad and London Stadium.

Defensive midfielders Adam Forshaw, Adam Clayton and Marten de Roon were all selected for those trips to Arsenal and City and Karanka could easily treat this almost like an away match.

There is some common sense to protecting Victor Valdes and the Boro back four but it does sometimes leave Alvaro Negredo isolated up front.

The Spanish striker has not scored since the opening day of the season with Cristhian Stuani the only player in Karanka’s squad to have scored more than once in the Premier League this season.

Stuani, however, has not started since the 1-0 home defeat to Watford with Karanka preferring the pace of Adama Traore to help on the counter.

Gaston Ramirez is arguably the most likely creative source in the Boro ranks but George Friend’s potential absence is a blow in both boxes.

Friend gets forward well and is a strong left-back but even if he does overcome his injury this may prove a step too far for dogged Middlesbrough.

Recommendation
Chelsea to win by one goal
1pt 5-2 general