Expect a feast of action at Anfield 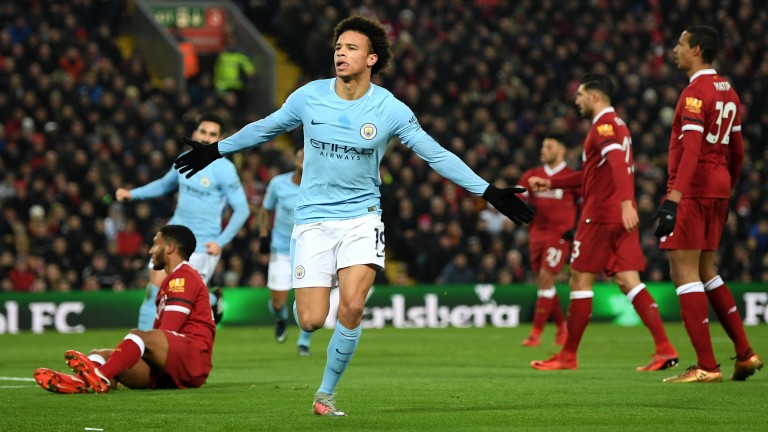 They're the best team in the Premier League by some distance, quite possibly the best team in Europe as well, so take Manchester City to win the eagerly-awaited first leg of the Battle of Britain showdown against Liverpool at Anfield.

There’s an irresistible lure to bet on goals in this all-Premier League clash.

The two top-flight tussles between these north-west rivals produced 12 goals and the combination of two sparkling attacks bumping into two average defences hints at a goal feast.

It isn’t as though either Jurgen Klopp or Pep Guardiola, two men who live and die by the adage that the best form of defence is attack, are renowned for their Plan Bs.

But any time you see odds-against about the runaway league leaders it's worth taking. Yes, Mo Salah is in the goalscoring form of his life, but City continue to do everything right, so back them to tick another box by taking a lead to Manchester for the second leg.

It’s easy to get seduced by Liverpool given the form of Salah, who has bagged 41 for club and country this season. The Egyptian has netted on 11 of his last 13 starts and is bound to be a warm order at 5-4 to score at any time.

However, a slightly more forensic study of Liverpool’s form reveals they’ve conceded 35 league goals this season plus nine more in the Champions League. They got away with it at Palace on Saturday where they were bailed out by Salah once more.

Virgil van Dijk has helped to steady the ship but watching Marcus Rashford and Wilfried Zaha make hay down Liverpool’s flanks shows an obvious area of vulnerability which City can exploit. Andrew Robertson and Trent Alexander-Arnold are assets going forward but the young right-back, in particular, still has much to learn defensively.

The fact that Liverpool are the only team to beat City this season – 4-3 in January – further fuels the fire of prospective Reds’ backers. Liverpool took advantage that night of a ten-minute period when City nodded off and the Reds were hanging on at the end.

In that game City were simply too open for their own good and Guardiola will make adjustments to avoid being cut to ribbons through the middle so easily.

The first game between the sides ended in a 5-0 win for City. The pro-Liverpool camp would point to Sadio Mane’s early sending-off distorting the game. Perhaps it did, but they were 1-0 down when the Senegalese saw red.

Both of these teams are massively confident. City should have been posed a question or two by Everton at the weekend but instead stormed to a 3-1 win that was ludicrous in its simplicity. It did, however, say as much about the abject Toffees as it did about City.

Yet another high-scoring game would come as no surprise. City’s league games this term average 3.5 goals and Liverpool’s 3.4. In the Champions League, City's matches have come in at 3.25 goals each and Liverpool’s are higher still at 4.3.

Both teams to score and over 2.5 goals should be warm orders or you can combine them.

Team news
Liverpool
Defenders Joel Matip, Ragnar Klavan and Joe Gomez are injured, as is forward Adam Lallana. Emre Can (back) is a major doubt.

Manchester City
Sergio Aguero is set to be on the bench after a month out with a knee injury. Benjamin Mendy continues to miss out.