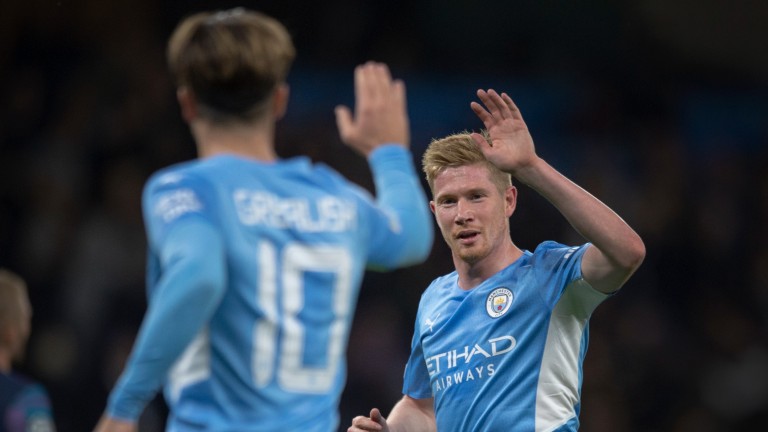 Man City are favourites to win the Champions League after the draw for the last 16
Visionhaus
1 of 1
By Aaron Ashley UPDATED 2:07PM, DEC 16 2021

Manchester City remain at the head of the Champions League betting after a controversial last-16 draw saw them land Sporting Lisbon, and they are 3-1 with Coral and Ladbrokes to go one better than last year and claim a maiden European crown.

The Citizens played second fiddle to Chelsea in last season’s trophy decider and the market is again dominated by the Premier League with the Blues and Liverpool also in the top four of the betting.

Pep Guardiola’s side had originally been paired with Villarreal, but due to technical errors in the initial draw, Uefa declared it void and restaged the whole thing later in the day.

But while City should be unfazed by the redraw, Liverpool and Real Madrid will be cursing their luck.

The Merseyside men thought they were going to play Red Bull Salzburg but now must face Serie A leaders Inter Milan, while Real lock horns with French heavyweights Paris St-Germain rather than Benfica.

Liverpool are 11-2 with Betfair for Champions League glory while Los Galacticos have been pushed out to 20-1 with Hills after landing a tie with the Parisians.

Firms paid out on both the original and the revised draw while Betfair confirmed that all outrights bets placed on the exchange after the initial draw will stand.

Bet365 go 4-6 about another English winner of the Champions League this season with City quoted at 11-8 to be the furthest progressing Premier League team in the competition.

Chelsea were unaffected by the carnage as they twice drew Lille, although Manchester United will be pleased as they face Atletico Madrid instead of star-studded PSG.

Thomas Tuchel’s team are 7-1 to repeat last season’s heroics while the Red Devils are 16-1 to provide Ralf Rangnick with some immediate success, having been 22-1 before Uefa’s blunder.

Bayern Munich, who at 7-2 are the shortest of the non-English teams, also had a result and have been supported following the redraw which saw them pull out Red Bull Salzburg instead of Atletico Madrid.

There has also been some money for Eredivisie leaders Ajax, who are 14-1 shots after being drawn against Benfica, while Villarreal face Juventus.

Barcelona against Napoli is the stand-out tie in the Europa League playoffs and the Catalan giants are 8-1 with bet365 to lift the trophy.

Rangers take on 11-2 tournament favourites Borussia Dortmund while Sevilla, who have won the competition a record six times, are 7-1 after being paired with Dinamo Zagreb.

This season's new format means that the eight group winners, including 12-1 West Ham, directly advance to the round of 16 which will be played in March.

Leicester will play Danish side Randers, who are competing for the first time in a European knockout phase, in the Europa Conference League playoffs and Celtic will face Norwegian club Bodo/Glimt.

Either Tottenham or Dutch side Vitesse will face Rapid Vienna in their playoff tie, which will be determined by the outcome of Spurs' final group game against Rennes, which was postponed.