Liverpool favourites to grab glory at the Stade de France 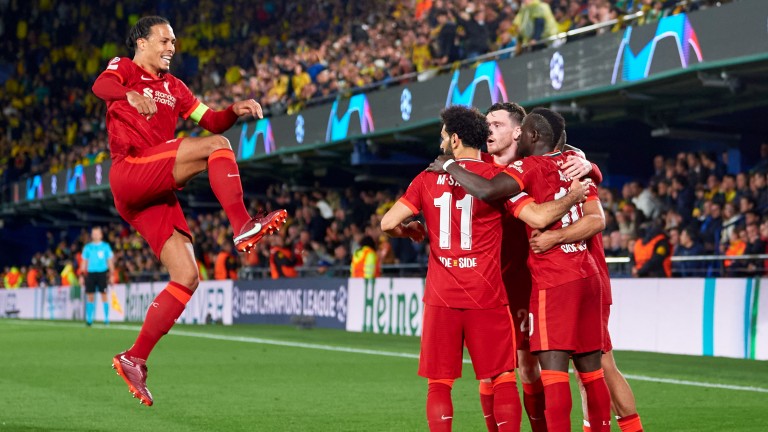 Liverpool celebrate victory over Villarreal in the semi-final second leg
Quality Sport Images
1 of 1
By Ian Wilkerson UPDATED 9:49AM, MAY 5 2022

The 2022 Champions League final will be between Liverpool and Real Madrid in Paris, where the two teams met in the 1981 European Cup final, which the Reds won 1-0.

Real Madrid gained their revenge in 2018 when they won 3-1 in the Champions League final in Kiev, Ukraine.

Madrid booked their place in the end-of-season showdown with an extra-time victory over Manchester City at the Santiago Bernabeu on Wednesday as they overturned a 4-3 first-leg deficit.

Liverpool had overcome Spanish opposition themselves when they beat Villarreal in the other semi-final the previous evening.

The final will be played on Saturday, May 28 at the Stade de France.

What happened in the Champions League semi-finals?

Liverpool overcame Villarreal 5-2 on aggregate to reach their 10th final. The Reds controlled the first leg of the tie at Anfield, cruising to a 2-0 victory courtesy of an own goal from Pervis Estupinan and Sadio Mane's fourth European strike of the campaign.

The return leg turned out to be far more competitive with Villarreal erasing Liverpool's advantage in the first half via goals from Boulaye Dia and Francis Coquelin. The Yellow Submarine couldn't keep up the pace after the interval though as Liverpool went through the gears, securing a 3-2 victory on the night. Luis Diaz's introduction at the break changed the game, the Colombian scoring the second of the night in between goals from Fabinho and Mane.

Manchester City and Real Madrid engaged in one of the games of the season in the first leg of their semi-final with the Citizens coming out on top 4-3. Kevin de Bruyne put City ahead inside 90 seconds with the quickest semi-final goal in Champions League history, with Gabriel Jesus making it 2-0 after 11 minutes.

The competition's top scorer Karim Benzema reduced the deficit before the break with a deft finish, only for Phil Foden to grab a third for City soon after the restart. Vinicius Junior's excellent solo effort pegged back City once more before Bernardo Silva slammed in the fourth. Benzema's Panenka penalty eight minutes from time kept Real alive in the tie ahead of the second leg in Madrid.

The English side looked to have booked their spot in the final for the second consecutive year when Riyad Mahrez fired home but, in dramatic scenes, two late goals from Rodrygo forced the match into extra-time.

Madrid were then awarded a penalty when Benzema was fouled and the Frenchman sent Ederson the wrong way from the spot to put the Spanish side into the final.

What happened in the Champions League quarter-final second legs?

Chelsea saw their title defence come to a dramatic conclusion as they bowed out at the quarter-final stage despite a 3-2 win over Real Madrid at the Bernabeu.

Goals from Mason Mount and Antonio Rudiger saw the Blues move level in the tie at 3-3 on aggregate before Timo Werner's effort with 15 minutes remaining put the visitors 3-0 ahead on the night and on the brink of the semi-finals.

Chelsea had further chances to kill the tie off but failed to take them and they were made to pay when Rodrygo's strike forced extra time. Karim Benzema, hero of the first leg, then headed home the decisive goal after six minutes to seal Real's place in the semi-finals 5-4 on aggregate.

Tuesday's other second leg was equally as dramatic as Villarreal beat Bayern Munich 2-1 on aggregate. Robert Lewandowski bagged his 13th Champions League goal of the season to level the tie after 52 minutes, only for the Yellow Submarine to hit back with two minutes remaining through Samuel Chukwueze, sending the Spaniards through.

Liverpool, holding a 3-1 first-leg lead over Benfica, made no mistake at Anfield in Wednesday's return fixture. Ibrahima Konate repeated his first-leg heroics by opening the scoring for the hosts and while Benfica managed to level, Roberto Firmino's second-half brace put the tie beyond any doubt.

Benfica fought back with goals from Roman Yaremchuk and Darwin Nunez which earned them a 3-3 draw on the night, but it was too little, too late as Liverpool ran out 6-4 winners on aggregate.

Manchester City, meanwhile, journeyed to Spain with a 1-0 first-leg advantage over Atletico Madrid and Pep Guardiola's men became embroiled in a serious scrap at the Wanda Metropolitano.

The Citizens, who required some last-ditch defending in the latter stages of the contest, managed to hold firm to see out a goalless draw and seal their progress. The fixture would descend into chaos in the final minutes as a host of cards were shown to both teams - including a red for Atletico centre-back Felipe.

What happened in the Champions League quarter-final first legs?

Manchester City took a step towards the semi-finals by defeating Atletico Madrid 1-0 at the Etihad in Tuesday's first leg thanks to a 70th-minute strike from Kevin De Bruyne.

While Tuesday's matches saw positive results for the English sides, Wednesday was a different story as reigning champions Chelsea lost 3-1 against a Karim Benzema-inspired Real Madrid - the Frenchman bagging a hat-trick at Stamford Bridge.

Wednesday's other match saw a shock as Villarreal battled to a 1-0 win over Bayern Munich at the Estadio de la Ceramica. The German giants will still fancy their chances of turning the tie on its head in Bavaria.

What happened in the round of 16?

Holders Chelsea secured their place in the quarter-finals with a hard-fought 2-1 success in Lille to progress 4-1 on aggregate but there was a big shock in Turin as Juventus were beaten 3-0 at home by Villarreal, who are one of three Spanish sides in the last eight.

Manchester United suffered a knockout blow, losing 1-0 to Atletico Madrid at Old Trafford to go down 2-1 on aggregate.

Renan Lodi scored the only goal of the game in Manchester to cause a minor upset, but there was a bigger shock in Amsterdam as Benfica beat Ajax 1-0, to progress 3-2 on aggregate. Darwin Nunez was the hero for Benfica, who will be the team all of the big guns will want to draw in the quarter-finals.

Despite losing 1-0 at home to ten-man Inter in the second leg at Anfield, Liverpool did enough to seal their place in the quarter-finals of the Champions League courtesy of a 2-0 triumph at the San Siro.

Roberto Firmino and Mo Salah found the net in Milan in the first leg to give Liverpool a lead to take back to Merseyside, where some slack finishing made their task tougher than it should have been.

The reigning Serie A champions put up a fight and a superb strike on the hour mark from Lautaro Martinez provided some optimism, although their hopes were dashed only two minutes later when Alexis Sanchez was shown a red card.

A 1-1 draw at the Red Bull Arena had seemingly left the tie hanging in the balance but the brilliant Bavarians had other ideas as they thrashed the Austrians 7-1 in Munich to win 8-2 on aggregate.

Robert Lewandowski scored a hat-trick inside the opening 23 minutes, while there was also a brace for Thomas Muller and goals for Serge Gnabry and Leroy Sane.

Liverpool and Bayern will be joined in the competition's quarter-finals by Real Madrid, who turned their tie with Paris Saint-Germain on its head on Wednesday night.

Trailing 1-0 from the first leg at the Parc des Princes, things went from bad to worse for Real Madrid in the second leg at the Bernabeu when Kylian Mbappe put his side 2-0 up with a fine first-half strike, moments after having a goal ruled out for offside.

PSG hit 1.06 to qualify on the Betfair Exchange but an extraordinary second-half turnaround followed as a 17-minute hat-trick from Karim Benzema gave Madrid a 3-1 lead.

They held on and progressed 3-2 on aggregate.

Manchester City had all but secured their spot in the last eight with a 5-0 win over Sporting Lisbon in the first leg of their last-16 tie but the return fixture fizzled out into a 0-0 draw at the Etihad.

Reigning European champions Chelsea are also in command of their knockout tie with Lille after goals from Kai Havertz and Christian Pulisic at Stamford Bridge gifted them a 2-0 lead at the halfway points.

The Blues are 3-4 to win the second leg at the Stade Pierre Mauroy and are 8-1 to defend their crown.

The ties involving Benfica and Ajax and Villarreal and Juventus are still hanging in the balance with both first legs ending level.

Dusan Vlahovic scored the second-fastest goal ever for a Champions League debutant as Juventus drew 1-1 in Spain, and they are 2-5 to qualify with the second game taking place in Turin.

Who is playing in the Champions League?

Liverpool and Real Madrid are the two teams remaining in the Champions League and will lock horns in the final at the Stade de France.

These are the results of semi-final ties:

These are the results of the four quarter-final ties:

How does the Champions League knockout stage work?

Each tie will be played on a two-leg basis so each team will host a match at their home ground. The winner will be the team who scores the most goals over the course of the two games.

This is the first season in the competition's history that the away-goals rule will not be in operation.

Previously, if the teams were level on aggregate at the end of the second match, the winner would be the team who had scored the highest number of goals as the away team.

However, this has now been abolished, so if this situation arises, extra-time (two halves of 15 minutes) will be played before a possible penalty shootout.

When are the Champions League semi-finals and final going to be played?

Manchester City and Real Madrid will play their semi-final first leg on Tuesday, April 26 with Liverpool's tie with Villarreal taking place the following day. The return fixtures will be played the following week and the final will take place on Saturday, May 28.

Will Champions League matches be televised?

Matches will be available to watch on BT Sport

Who are the favourites to win the Champions League?

Liverpool are odds-on to win a seventh European title after securing their place in the final. Manchester City are a 5-4 chance to win their maiden Champions League title, while Real Madrid are the 9-1 outsiders with Boyles.

Where will the 2022 Champions League final be played?

The first Champions League final at the Stade de France took place in 2000 when Real Madrid beat Valencia 3-0 in all-Spanish affair, while it was also the location of Barcelona's 2-1 win over Arsenal in 2006.