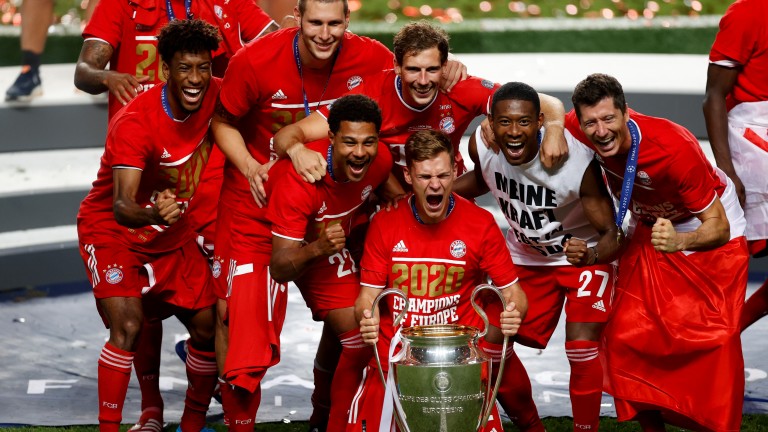 It used to be said that defending the Champions League trophy was an impossible task until Real Madrid won three in a row, and Bayern Munich look a good bet to go back-to-back this season.

Bayern and Manchester City are a fair distance ahead of the field in this season's competition and both have been handed comfortable enough last-16 ties against Lazio and Borussia Monchengladbach to suggest the big guns will make serene progress to the quarter-finals.

If they avoid each other until the final then I expect them to meet in Istanbul and what a showdown it would be. But in terms of course and distance form you'd have to put Bayern ahead of City in this competition.

Bayern battered teams on their way to Champions League glory last season and that aggressive offensive play shows they are at home in this competition whereas for some reason City have never quite shown the same kind of dominance on the European stage.

Maybe it's a pedigree thing but each year they have come up short and not always to European giants as they have lost to Monaco, Tottenham and Lyon.

Pep Guardiola is a genius but he seems to overcomplicate things in the Champions League and we saw that last season when he changed formation against Lyon.

Bayern have a greater confidence having won it before and I look at the newly crowned world champions as being totally dominant in a strong Bundesliga.

Let's not forget that Germany have four teams in the last 16 and Leipzig knocked out Manchester United, while Gladbach qualified ahead of current Serie A leaders Inter.

Hansi Flick's side bashed Atletico Madrid, the strong La Liga title favourites, 4-0 at home in the group stage and then got a draw in Spain with a makeshift side.

Robert Lewandowski has not even really got going in this season's competition and they are my favourites to win the title.

Liverpool won't find it easy against Leipzig given their current form and Chelsea against Atletico is an intriguing last-16 tie.

Chelsea seem to break all the rules on how successful teams go about building teams and yet it rarely does them any harm. Their European Cup success came in a chaotic campaign which ended with my former Blues teammate Roberto Di Matteo leading the club to Champions League glory.

Timo Werner and Kai Havertz have mentioned they have found the physicality of the Premier League difficult to figure out in their first season but the Germans could find life easier in the Champions League.

Coach Thomas Tuchel took PSG to the final last year and I think they are interesting contenders, albeit Atletico will be a difficult enough obstacle to overcome.

United blew a great chance to qualify from their Champions League group but the consolation prize can go their way in the Europa League.

English teams were slow to take the Europa competition seriously but there has been a change in attitude. In the last eight years Chelsea (twice) and United have won it, while Arsenal and Liverpool both reached the final.

Ole Gunnar Solskjaer, in my opinion, won't take United to the greatest heights in the Premier League where he is likely to come up short against Guardiola and Klopp, but this is a different level.