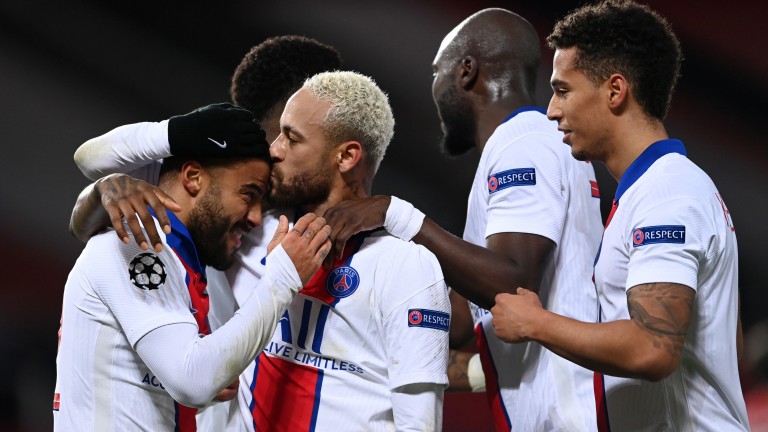 Best bets and predictions for Tuesday's group matches in the Uefa Champions League.

Despite being unbeaten in Group F, and taking four points off leaders Borussia Dortmund, Lazio are still not assured of qualification for the last 16.

A home defeat to Club Brugge would see the Romans knocked out and, while the Belgians are clear underdogs, Lazio's leaky defence means they can take nothing for granted.

Given the context of the fixture, with Brugge needing to win to qualify, the odds about over 2.5 goals look tempting.

A draw would do nicely for Lazio but, having kept just one clean sheet in their last 14 matches, they can hardly be expected to play for a point.

Both teams have scored in all five of their group games, including 3-1 home wins over Dortmund and Zenit, so Brugge should fancy their chances of making it a nervy night for the hosts.

Borussia Dortmund have not been at their best this season but a victory at Zenit St Petersburg would seal top spot in Group F.

Lucien Favre's men are already guaranteed a place in the last 16 but they could do with a morale-boosting win after a shock defeat to Cologne and 1-1 draws with Lazio and Eintracht Frankfurt in their last three matches.

They beat Zenit 2-0 on matchday two, although they had to wait until the 78th minute for Jadon Sancho's opener, and they will be without injured goal machine Erling Haaland for the rest of 2020.

That should mean a central attacking role for the experienced Marco Reus. The 31-year-old has scored twice in four Bundeliga starts this season and had five shots in the 3-2 defeat to Bayern Munich – the most of any player on the pitch.

Alvaro Morata to score at any time
1pt 21-10 Betway

Ronald Koeman and Andrea Pirlo were both adored during their playing careers with Barcelona and Juventus but the pair have made patchy starts as managers at the European giants.

Koeman's Barca slipped to ninth in La Liga after a shock defeat at Cadiz last weekend although the Dutchman has enjoyed some respite in the Champions League, winning five out of five including a 2-0 victory at Juve.

Cristiano Ronaldo missed that defeat while Lionel Messi has been rested for Barca's last two group games but the superstars could go head to head at Camp Nou on matchday six.

However, Alvaro Morata has scored six goals for Juventus in the group (Messi and Ronaldo have five between them) and the former Real Madrid striker, who had a hat-trick of 'goals' ruled out in the reverse fixture, can trouble a depleted Barcelona defence.

Dynamo Kiev and Ferencvaros must have feared the worst when they were drawn alongside Barcelona and Juventus but both have had some moments to remember in Group G.

An under-strength Dynamo side were beaten 2-1 by Barca at Camp Nou while Ferencvaros were minutes away from a coupon-busting draw with Juve in Turin on matchday four.

The pair shared an entertaining 2-2 draw in Hungary on matchday two and a share of the spoils looks a big price in the return fixture.

Dynamo are in fine form domestically but they should be respectful of a Ferencvaros side who had 19 shots in their last two defeats to Juve and Barca. A 0-0, 1-1 or 2-2 draw would ensure the men from Kiev advance to the Europa League so they may not push too hard if the game is level late on.

Paris St-Germain have put themselves in a strong position in Group H thanks to wins over Leipzig and Manchester United in their last two games and they are unlikely to slip up at home to Istanbul Basaksehir.

PSG, last season's runners-up, will top the group if they can see off the Turks, whose defence has been found out at Champions League level.

Basaksehir are guaranteed to finish bottom, despite a memorable 2-1 home win over United, and they have conceded 13 goals in five group games including a 4-3 defeat to Leipzig last time out.

It has been a similar story in the Super Lig, where their last six matches have finished 5-1, 2-1, 2-1, 2-3, 3-3 and 1-1, and PSG, who put three goals past United at Old Trafford last time out, should enjoy another successful night in Europe.

Rennes have found things tough in their first foray into the Champions League and the Ligue 1 side could sign off their Group E campaign with a fifth defeat in six games.

The group finishing positions are already inked in with Sevilla runners-up to Chelsea and Rennes bottom after their defeat to Krasnodar on matchday five.

They followed up that loss with a 2-0 home defeat to Lens at the weekend and they have scored just four goals in nine games dating back to the 1-0 defeat away to Sevilla on matchday two.

With nothing to play for, stakes should be kept modest but Sevilla boss Julen Lopetegui will want a positive response after Chelsea striker Olivier Giroud's four-goal haul against his side last time out. That was a rare blip from an otherwise solid Sevilla defence and they should keep their struggling hosts quiet.