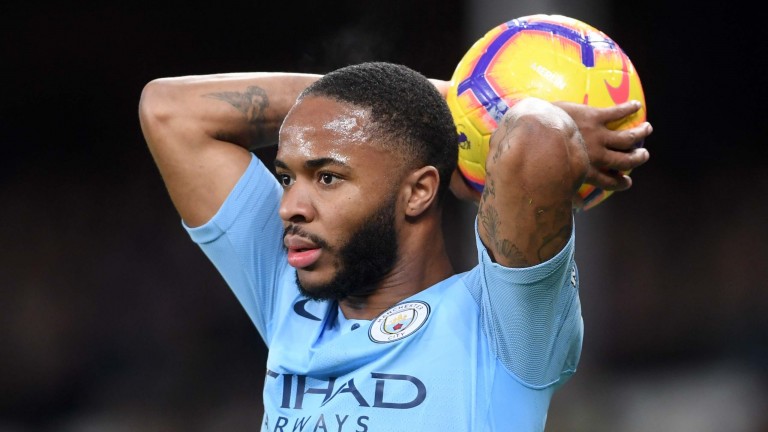 Raheem Sterling is one of many threats for Manchester City
Laurence Griffiths
1 of 1
By Steve Davies 8:00PM, FEB 19 2019

Schalke’s last three Champions League campaigns have ended at the last-16 stage and an absence of firepower in the Royal Blue ranks should ensure that sequence is extended to four.

Manchester City have made the short hop to Gelsenkirchen with their quad dreams very much alive and little evidence that struggling Schalke are capable of preventing them from progressing to the Champions League’s last eight.

Pep’s powerhouses are brimming with confidence after 12 wins in their last 13 and they can chalk up another success this evening to put them in the perfect frame of mind for Sunday’s League Cup final showdown with shambolic Chelsea at Wembley.

Twelve months ago City drew Basel away in the Champions League and romped to a routine 4-0 success.

Schalke have come back from the winter break looking better organised and more obdurate since a tweak in formation, and last season’s Bundesliga runners-up ought to be competent enough to avoid the embarrassment which befell Basel last February.

City, inevitably, are long odds-on at the Veltins-Arena. A riskier punt for greater reward, however, might be City and under 3.5 goals at 6-5.

Schalke may not be very good this season after failing to replace key players but 22 of their 28 league and Champions League encounters have yielded no more than three goals, which shows they are no mugs defensively playing in a division which is traditionally full of goals.

Domenico Tedesco’s men are without a win in four and Saturday’s 0-0 draw with Freiburg was a horribly attritional affair between teams desperate to avoid being dragged into relegation trouble.

Since the winter break Tedesco has erred towards a 4-2-3-1 formation. He generally deployed a 3-5-2 shape during the Group D campaign in the autumn, a programme which saw them finish on 11 points, behind Porto but ahead of lightweights Galatasaray and Lokomotiv Moscow.

The strengthening in front of defence and playing one up front makes sense given the absence of any quality strikers at the club and the fact that City will dominate possession.

Tedesco is so short of frontmen with Breel Embolo and Steven Skrzybski injured and last year’s top scorer Guido Burgstaller off colour that he has turned to teenage Turk Ahmed Kutucu to lead the line.

They haven’t managed to replace players of the calibre of Leon Goretzka and Naldo, and Tedesco is turning more and more to youngsters like Kutucu, American starlet Weston McKennie, Suat Serdar and Welsh 18-year-old speedster Rabbi Matondo, who has made quite an impact since joining from Manchester City three weeks ago.

Schalke, with another ex-City man in Matija Nastasic in defence, will be desperate to stay in the tie for the second leg.

City, with former Schalke graduate Leroy Sane in their ranks, will also be mindful of Sunday’s first final of the season, although they would clearly want to get the job of qualification effectively done in the first leg.

Recalls for key men who missed the 4-1 win at Newport will make them stronger and they look as close to unbeatable as they have been at any point in Guardiola’s reign. A routine win looks on the cards.

Manchester City
Vincent Kompany, Eliaquim Mangala and Benjamin Mendy are back in training.

Key stat
Schalke prop up the goals-per-game table in the Bundesliga with an average of 2.59.