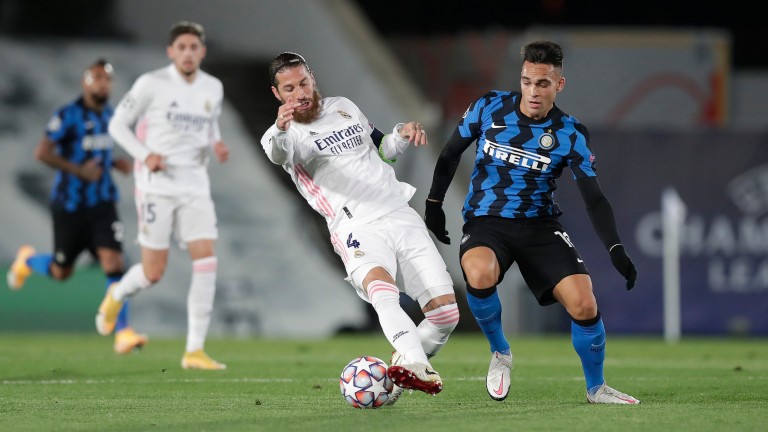 It could be a tense night in Group B for Real Madrid and Inter Milan
Gonzalo Arroyo Moreno
1 of 1
By James Milton 4:35PM, DEC 8 2020

Best bets and predictions for Wednesday's group matches in the Uefa Champions League.

Atalanta ended Liverpool's long unbeaten run at Anfield with a 2-0 win on matchday four and another away clean sheet at Ajax would take them through to the last 16.

Gian Piero Gasperini's swashbuckling side are not set up to grind out 0-0 draws although they have been involved in some uncharacteristically low-scoring games recently.

Ajax suffered a shock defeat to FC Twente at the weekend, having won their previous five home Eredivisie matches by an aggregate score of 20-4, and they have competed well in this group, beating Midtjyllland at home and away and twice losing 1-0 to Liverpool.

The Dutch side blew a 2-0 lead to draw 2-2 with Atalanta on matchday two but needing to win could suit their attacking style and may lead to an entertaining second half in Amsterdam.

Bayern Munich haven't looked back since a 4-0 home win over Atletico Madrid on matchday one and the Champions League holders sealed top spot in the group on matchday four.

They drew 1-1 with a much-changed team away to Atletico last time out and Hansi Flick should show off the depth of his squad against winless Lokomotiv Moscow.

The Russians have not been disgraced in a tough section, drawing twice with Atleti, taking a point off Salzburg in Austria and losing only 2-1 at home to Bayern.

Russia forward Anton Miranchuk scored Lokomotiv's goal that night and he has notched six times in his last eight club appearances including penalties against Atletico and Salzburg.

The 25-year-old scored Nations League goals against Hungary and Turkey in September and October and he could trouble a Bayern backline that has been short of clean sheets recently.

Shakhtar Donetsk's results in Group B make for puzzling reading but the Ukrainians are worth backing to pull off another shock on matchday six.

Shakhtar have already done the double over 13-time European champions Real Madrid and drawn 0-0 at home to Inter but 4-0 and 6-0 defeats to Borussia Monchengladbach mean there is still work to be done if they are to qualify.

Inter need a victory to have any chance of reaching the last 16 and they thumped Shakhtar 5-0 on their way to the Europa League final last season.

Lautaro Martinez and Romelu Lukaku both scored twice in that win and there is no doubting the quality of Antonio Conte's forward line. However, the Nerazzurri have conceded nine goals in five group games and the longer Shakhtar can keep things tight the more pressure their hosts will feel.

There are more significant fixtures elsewhere on the continent than Porto's trip to Olympiakos but the impressive visitors look a big price to avoid defeat in Greece.

Porto are likely to make changes, having already wrapped up second place in the group behind Manchester City, and Olympiakos's home record has to be respected.

In the last two Champions League campaigns only City (1-0) and Bayern Munich (3-2) have won in Piraeus but the hosts lost 2-1 to struggling Marseille on matchday five and they may find it hard to break down even an understrength Porto defence.

A high-scoring finale looks unlikely as Porto have kept four consecutive clean sheets in the group since their opening 3-1 defeat at City. Olympiakos are odds-on favourites but they have scored just twice in five group matches and should be swerved on the final day.

Real Madrid are unrecognisable from the team who ground out ten wins in their last 11 La Liga games to claim the title last season and they face a nervy end to the Champions League group stage.

Real are favourites to win Group B but they could still finish bottom of this fascinating section if they lose to Borussia Monchengladbach and Inter beat Shakhtar Donetsk.

Zinedine Zidane hopes to have centre-back Sergio Ramos back from injury as Real attempt to stifle a Gladbach side who have scored 16 goals in five group games.

Two of those goals have come from experienced midfielder Lars Stindl, who notched at home and away against Shakhtar and has had seven attempts on goal in his last three Champions League games. Stindl has scored six times in his last 13 appearances and should be on penalty duty for Gladbach.

Atletico Madrid's Champions League run was ended by RB Leipzig in last season's quarter-finals but they should avoid the same fate against another Red Bull-sponsored club this time.

With Real Madrid and Barcelona faltering, Atletico have a great chance of winning the title in Spain this season but they have been far less assured in Europe, taking just six points from their first five group games.

Joao Felix's late winner helped them see off Salzburg 3-2 on matchday two but they drew their next three games and another stalemate is the value bet in Austria.

A point would take Diego Simeone's men through and their defence has looked back to its miserly best in recent weeks. Thomas Muller's late penalty for Bayern is the only goal Atleti have conceded in their last six and they should be a match for free-scoring Salzburg.