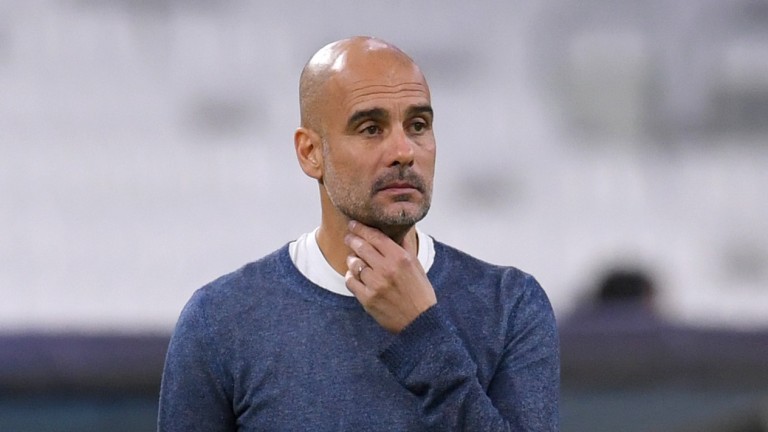 Bayern Munich and Manchester City are dominating the Champions League markets and if they can avoid each other in the draw, it would be no surprise to see them lining up as the finalists in Istanbul on May 29.

The main difference between the big two left in the competition is their European Cup and Champions League pedigree.

Bayern have reached the final on 11 occasions, including last season's 1-0 triumph over Paris St-Germain which saw them crowned European champions for a sixth time.

City have never gone further than the semi-finals and they are yet to advance beyond the last eight under Pep Guardiola, who is taking charge of his fifth European campaign as City manager since arriving at the Etihad in the summer of 2016.

However, there are signs that this season could be different for the Citizens, who have recovered from a slow start to the Premier League to exert a stranglehold on the title race.

City were eighth at Christmas but, despite domestic inconsistencies, they were dominant in Champions League Group C, collecting 16 points and conceding just one goal.

They have looked much more convincing in recent months and should soon have some key players coming back into the equation with Kevin De Bruyne and Sergio Aguero eager to make their mark on the knockout stages.

They have done fantastically well without their top men because others have come to the fore.

Ilkay Gundogan and Phil Foden have been outstanding in 2021 and their defence has looked rock-solid with John Stones performing with much greater assurance.

Guardiola has the luxury of choosing from Ruben Dias, Aymeric Laporte and a revitalised Stones in the centre-back positions and their solid defence gives City a great platform to succeed.

The Mancunians look strong favourites to come through their tie against Borussia Monchengladbach, and, if they can break their quarter-final hoodoo, it could be their time to go all the way.

If you are looking for a fresh bet then City are the value with Bayern the biggest dangers.

Bayern continue to dominate a strong Bundesliga - it is far from a coincidence that Germany has four teams through to the round of 16 - and they were comfortable in Champion League Group A, finishing seven points clear of rejuvenated Atletico Madrid.

Hansi Flick's side were the highest scorers in the group stage with 18 goals and their star-studded attack is capable of overwhelming any opponents.

The Bavarians were 4-0 winners at home to Atletico Madrid on matchday one which was a remarkable feat bearing in mind that Atleti have arguably the best defence in Europe and have established themselves at the top of La Liga.

Brilliant Bayern have a fair chance of retaining the trophy, but punters can be reasonably confident that City will deliver the best challenge of the English teams.

Liverpool's Premier League title defence is in tatters after their 4-1 loss at home to City and their Champions League hopes are far from certain to extend beyond their last-16 tie against Leipzig.

Jurgen Klopp's side have been ravaged by injuries and are no longer a team to be feared at Anfield following defeats there to Burnley, Brighton and City.

The absence of fans has hurt them more than most and it would be a surprise if they got close to repeating their magnificent Madrid triumph of 2019.

Chelsea are showing early promise under Thomas Tuchel and may have a better chance of delivering a challenge.

However, their impressive group-stage haul of 14 points was achieved at the expense of some ordinary opponents and it is doubtful whether they can meet the tougher challenges ahead of them, starting with a tricky tie against Atleti.

It is quite possible that Liverpool and Chelsea could suffer round-of-16 exits, allowing an early payout for anyone backing City to go the furthest of the three surviving Premier League sides.

Stronger challenges to Bayern and City could come from Atleti and PSG.

Given the Spanish side's defensive strength and the brilliance of their top scorer, Luis Suarez, it would be impossible to rule them out of any two-legged tie.

And PSG, despite their dip in domestic results, are capable of challenging anyone when they get it right.

Mauricio Pochettino reached the final with a weaker squad at Tottenham in 2018-19 and would love to end his personal trophy drought by winning the biggest of them all.