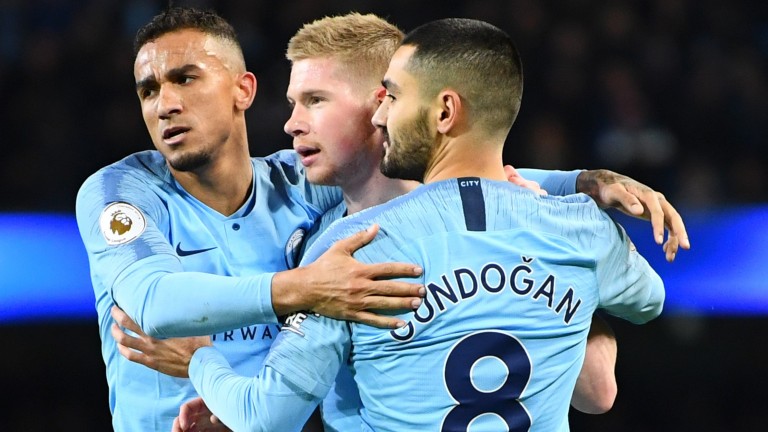 The more things change the more they stay the same.

This season's Champions League opening stage looked, on paper at least, intriguing with a number of groups which appeared to be far more competitive than previous campaigns.

However, for all the chatter of tougher battles ahead for heavyweights across the continent, the biggest casualties were 66-1 shots Napoli and only one of the groups produced a shock - a tiny one at that - as Ajax qualified at the expense of Benfica.

The same old faces have arrived at the last 16, but now it's serious.

There are no easy games, or maybe just one with Manchester City tackling Schalke, and the quality will rise with each round as Europe's elite do battle for the biggest prize in club football.

City are favourites and deservedly so after landing the plum tie against Bundesliga bottom-half outfit Schalke.

There can be a vulnerability to City defensively and yet as Sunday's 6-0 victory over Chelsea highlighted, the Premier League champions are the slickest attacking unit around.

They have a serial winner in the camp too as coach Pep Guardiola goes in search of his third Champions League trophy, although the last of those came in 2009 at Barcelona.

Talking of Barca brings us to City's closest rivals as far as the betting is concerned and their backers will be hoping it's a case of first in, last out after Barca booked a spot in the knockouts before anyone else.

Lionel Messi has scored six goals in just 297 minutes and his mesmerising dribbling in the 4-2 win over Tottenham at Wembley was arguably the finest individual group-stage performance.

That was a rare successful night on the road for Barca, who have lost five and won only one of their last seven Champions League knockout away ties. Thrashings in Rome and Paris in recent years hint at a structural issue that not even Messi's magic can camouflage.

Sick of always being the bridesmaid and never the bride, Juventus have taken a step away from the belief that teamwork makes the dream work with the signing of solo artist Cristiano Ronaldo.

A whopping 121 Champions League goals -120 of which came for Manchester United and Real Madrid - underlined Ronaldo's superstar credentials, but the Portugal international as surprisingly subdued in the group stage.

His one goal - a stunner against United - was almost worth the wait but he was not bought to put Young Boys to the sword.

Ronaldo will be judged on the knockout stage and it's a familiar foe waiting first in Atletico Madrid, who will no doubt make life hell for the Old Lady.

Paris St-Germain were laughing all the way to the quarter-finals following the knockout draw in December.

Jose Mourinho's Manchester United and their mess of a defence would surely be torn apart by Kylian Mbappe, Neymar and Edinson Cavani?

Now we will never know.

Ole Gunnar Solskjaer's United are a very different beast and so too are PSG minus the services of injured pair Neymar and Cavani.

Liverpool have their hands full with a Premier League title challenge and a clash with Bayern Munich, the first leg of which will be without suspended centre-back Virgil van Dijk.

The Reds could definitely go one better than last year's runners-up spot and they could also definitely go out in the last 16. That's the beauty of the Champions League - slender margins often prove decisive.

You have to be in it to win it and Tottenham could have a freerolling feeling following a miraculous escape after collecting only one point from the opening three group matches.

However, with Harry Kane and Dele Alli sidelined for their critical first leg against Bundesliga leaders Borussia Dortmund, Tottenham's hard work may have ultimately been for nothing as they look to shake off their tag of nearly men.

One team with a proven track record who could yet make a mockery of double-figure odds are Real Madrid.

They have drifted from ante-post odds of 17-2 but face an eminently winnable last-16 tie with Ajax and seem to have found their focus in preparation for a tilt at landing the Champions League for the fourth season running.

Forget what happened earlier in the campaign, it simply does not matter.

They possess two top keepers, a world-class centre-back pairing of Sergio Ramos and Raphael Varane plus the same midfield of Casemiro, Toni Kroos and Luka Modric who are proven course-and-distance performers.

Ronaldo is no longer around but Real Madrid have drawn away to Barcelona and won at Atletico in the past week to prove the holders are up for the defence of the trophy.