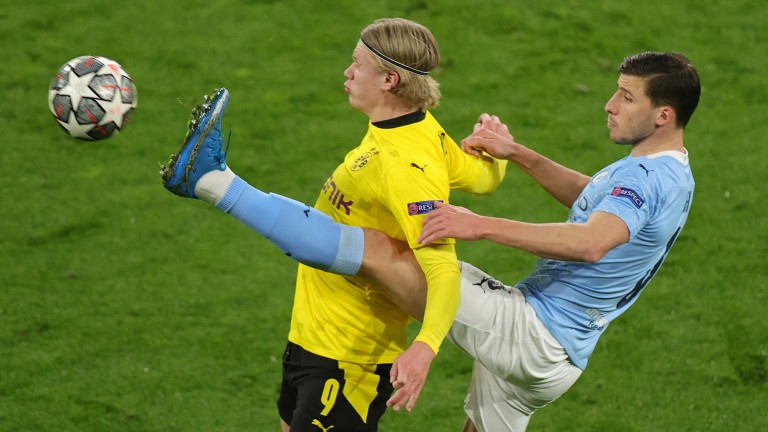 Kevin De Bruyne, Riyad Mahrez and Phil Foden have fired Manchester City to their first Champions League final, scoring nine goals between them since the start of the knockout stages.

Understandably, the City front three are prominent in the man-of-the-match betting for the clash with Chelsea and 7-2 favourite De Bruyne has already impressed the Uefa technical observers this season, winning the individual award in three of City's six knockout games.

Chelsea's N'Golo Kante was man of the match in both legs of their semi-final win over Real Madrid and is a 10-1 shot in the final but it could be worth chancing City's impressive centre-back Ruben Dias at 20-1.

The Portuguese rock has had a magnificent debut campaign in England, winning the Football Writers' Footballer of the Year award and being named City's Player of the Season.

Dias was Uefa's man of the match in the second leg of the Champions League semi-final against PSG and he was also outstanding in January's 3-1 league win against Chelsea at Stamford Bridge, making three tackles, six clearances and three interceptions.

Only Liverpool took more corners in the Premier League than Pep Guardiola's Citizens, who averaged 6.5 flag-kicks per game, and Chelsea were also in the top four of that chart.

The Blues averaged 5.95 corners per game in the league and their four Champions League knockout matches against Atletico Madrid and Porto yielded 11, 11, 13 and 15.

The corner tallies for Chelsea's last four domestic matches were ten against Arsenal (nine of which were taken by Thomas Tuchel's men), 14 against Leicester in the FA Cup final, 11 against the Foxes in the league and 11 at Aston Villa last weekend.

The odds for over 10.5 corners in Porto are appealing given both teams' styles of play. City's wide players Mahrez and Foden are in fine form while Chelsea's wing-backs have licence to get forward in Tuchel's 3-4-2-1 formation.

The Citizens won 11 of the 13 corners in the second leg of their quarter-final tie against Borussia Dortmund and there were ten and 12 flag-kicks taken in the two clashes with PSG. April's EFL Cup final against Tottenham featured 11 corners, eight for City, and over 10.5 backers could be collecting once again on Saturday.