Surrey can make a bold bid for the pennant too 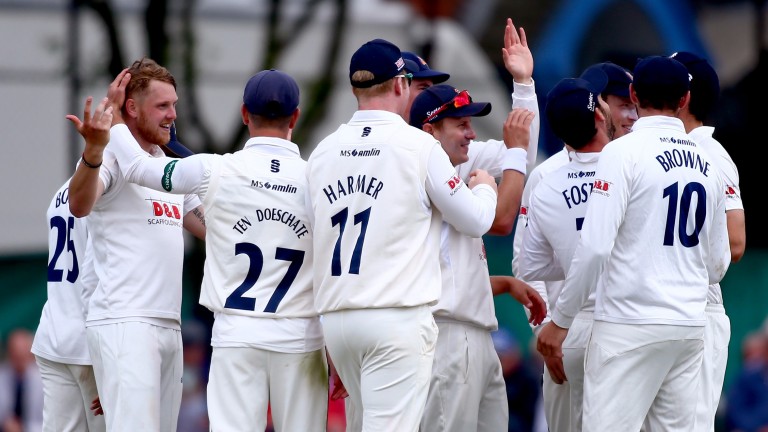 Jamie Porter (left) and his Essex teammates celebrate a wicket against Surrey
Jordan Mansfield
1 of 1
By Matthew Ireland UPDATED 9:43AM, APR 13 2018

Division One
begins 11am Friday

Theories of a seismic gap between the divisions in the County Championship were dispelled in 2017 as 25-1 Essex dominated on their return to the top flight.

There are no such fancy prices about the champions this time around with Essex 7-2 favourites to reclaim their crown but even so there could still be mileage in that price.

Essex stormed to the title last season by a mammoth 72 points, winning ten of their 14 matches – twice as many as nearest challengers Lancashire – and remained unbeaten.

The reason why they were head and shoulders above the rest last term was undoubtedly their bowling attack. Opening bowler Jamie Porter and spinner Simon Harmer shared 147 wickets between them with both averaging under 20 with the ball.

At some point Porter may deservedly come under England’s gaze but even if he is called up for Three Lions duty, Essex have a number of options at their disposal supplemented by either of their overseas pace duo, Neil Wagner and Peter Siddle.

And while England call-ups continue to hit other counties hard, only Alastair Cook is a Three Lions regular for Essex.

There is room for improvement in the batting ranks as they gained 12 fewer batting bonus points than with the ball but in Tom Westley, Nick Browne and Dan Lawrence they boast classy batsman who seem not to be in the thoughts of the England selectors.

Essex are a young side going places which could take them to a second successive title.

Champions in 2014 and 2015, Yorkshire were fourth last season but survived by only two points.

Batting frailties have plagued the White Rose for the past two seasons and they have looked to two of the world’s top batsmen, Cheteshwar Pujara and Kane Williamson, to plug the gap.

Even so they have lost stalwart Ryan Sidebottom to retirement and Adil Rashid to self-imposed red-ball exile which will blunt their potency with the ball.

The benign surfaces of The Oval continue to stifle Surrey’s bid for a first title in 16 years but the capture of Morne Morkel on a Kolpak contract could help them form a title bid on the road.

No side amassed more batting points than the big-spending Londoners last year and if they can turn just a handful of their ten draws into victories then they certainly have the necessary firepower with both bat and ball to push Essex all the way.

Last season’s runners-up Lancashire have recruited well in their hopes of going one better.

Former Durham pair Keaton Jennings and veteran Graham Onions should prove to be canny signings while Joe Mennie adds some Aussie grit with the ball.

For the other four sides in the top tier, survival looks the obvious primary aim although Hampshire, spurred on by a strong South African contingent including Hashim Amla for the first portion of the campaign, may have loftier aspirations.