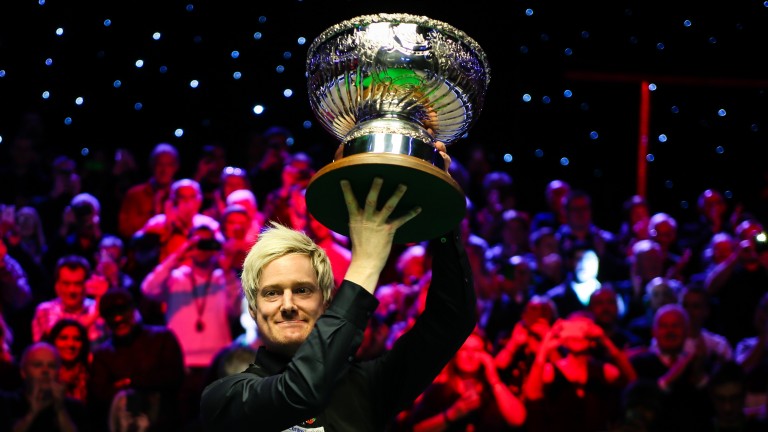 Free snooker tips, best bets and analysis for the Champion of Champions, which starts in Bolton on Monday.

Neil Robertson has a superb record in the Champion of Champions and at 11-2 it could pay to back the Aussie to claim a hat-trick of titles in Bolton this week.

Champion in 2015 and 2019, Robertson was a beaten finalist last year and he has also been a losing semi-finalist twice. The Aussie comes into this event in good form having won the English Open at the start of the month and when on-song there are few players who can match his break-building power.

The four biggest-priced runners in the tournament - Stephen Maguire, Ryan Day, Jordan Brown and David Lilley - are all housed in the same half of the draw as Robertson, and although first-round opponent Mark Williams is always a tough competitor, the draw looks to have fallen kindly for the Aussie.

Robbo will face either Brown or Kyren Wilson in the quarter-finals should he come through against Williams and there’s only really Judd Trump to worry about in the last four.

Compare the top half to the bottom section of the draw and it’s clear where it’s best to focus punting attention.

Ronnie O’Sullivan, John Higgins, Mark Selby and Shaun Murphy are the seeded cuemen in the other half and they are joined by talented performers Stuart Bingham, Ding Junhui, Yan Bingtao and Dave Gilbert.

It’s a tough task trying to pick the best of that bunch, and the likes of O’Sullivan and Selby are the same price as Robertson despite their trickier paths.

At 11-2, an in-form Robertson is hard to pass over and the Aussie looks excellent value to claim another big title.

As for the first round of matches, O'Sullivan's clash with Bingham looks like an interesting contest.

The Rocket looked in decent nick in the recent English Open and it took an inspired Higgins to stop him in the semi-finals.

O’Sullivan showed that he is still well capable of dominating opponents when beating talented performers Jamie Clarke 4-0 and Luca Brecel 5-1 at the Marshall Arena and could exert his class over Bingham.

Bingham is a capable cueman, but he was beaten by Fergal O’Brien in the first round of the English Open, made only the third round of the Northern Ireland Open and exited the British Open at the second-round stage.

That’s a pretty shoddy run of results and a clash against O’Sullivan is unlikely to offer much solace. It’s 4-5 that the Rocket can give Bingham a 1.5-frame start in this best-of-seven contest and that looks well within his capabilities.