Wolves will fancy chances of building on Anfield win 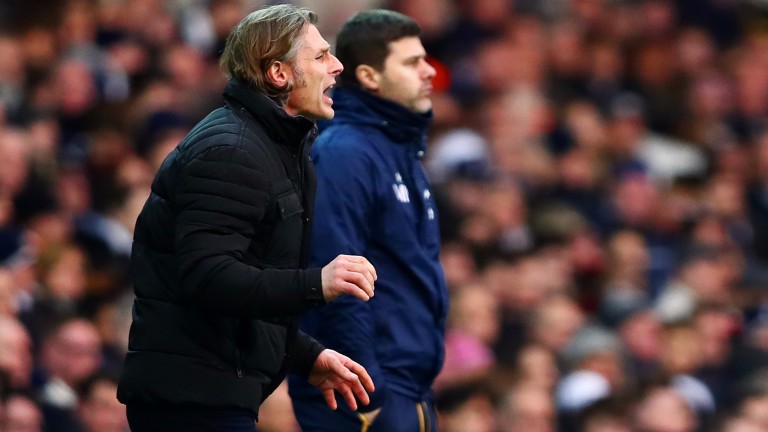 Good enough to go to White Hart Lane and scare Spurs half to death, back Wycombe to get road-trip rewards when they head to Exeter in Sky Bet League Two.

These are the fourth tier’s in-form teams, two outfits scrambling around for points in the autumn who are now bang in the thick of the promotion hunt.

Exeter have won five in a row and are unbeaten in ten. Their last four wins have all been to nil, the pick of which had to be Saturday’s gutsy 1-0 success at Portsmouth.

Wycombe were unbeaten in 17 ahead of their heartbreaking 4-3 loss at Tottenham and maybe they can take advantage of the fact that the Grecians are the division’s joint-lowest home scorers.

The wholesale changes being made by Premier League bosses in the FA Cup incurred the wrath of footballing romantics, but it wasn’t just top-flight chiefs tinkering with their line-ups.

Paul Lambert switched seven of his side at Anfield (and that seemed to work out okay) which means the Scot can reintroduce some fresh faces at Oakwell should he wish.

Barnsley, coming to terms with the loss of key figures like Conor Hourihane and Sam Winnall, scraped a win at Rotherham on Saturday but hardly shone.

If rock-bottom of the Sky Bet Championship Rotherham can can get at the Tykes, a buoyant Wolves side will certainly fancy their chances and showed on Merseyside that they have the tools to hurt sides.

These are two unpredictable teams and it’s quite feasible this contest will be both open and packed with chances. Hopefully, at least three will be taken.

Oxford do love a cup tie and having beaten Rotherham, Scunthorpe and Newcastle in knockout action in recent weeks, take them to claim Bradford’s scalp in the EFL Trophy.

Finalists last year, Oxford clearly have a soft spot for this competition and are in rock-solid form, especially at home.

Bradford are a striker light following James Hanson’s exit to Yorkshire rivals Sheffield United and while good enough to win
at Oldham at the weekend, this will be an altogether tougher assignment.