Celtic can shut out Rosenborg and gain first-leg advantage

Istanbul Basaksehir look value to make the playoff round 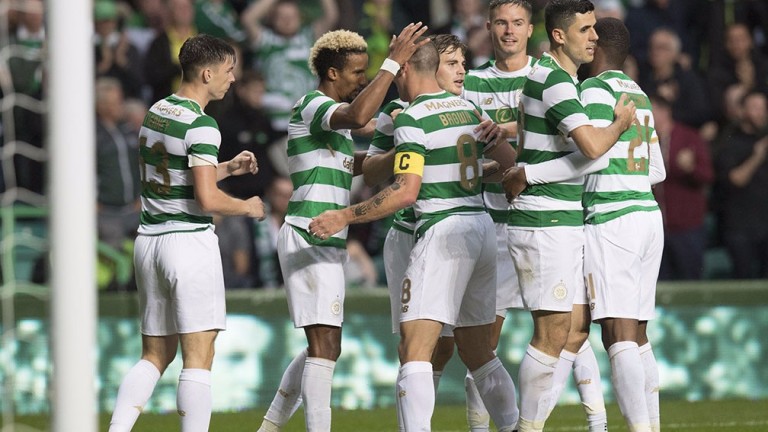 Celtic celebrate a goal against Linfield in the second qualifying round
Getty Images
1 of 1
By Dan Childs 8:04PM, JUL 25 2017

Celtic have won their last seven home games in Champions League qualifying or playoff round fixtures and can establish a first-leg advantage over Rosenborg in Glasgow.

Bhoys manager Brendan Rodgers loves his teams to play attacking football but will be acutely aware of the value of a clean sheet given the difficulty of next Wednesday's second leg in Trondheim.

Rosenborg have lost just one of their last 12 home games but have struggled on their Champions League travels, losing five on the bounce until a 1-1 draw at Dundalk in the first leg of their second qualifying-round clash a fortnight ago.

Dundalk pushed Rosenborg all the way in the return leg before going down 2-1 after extra-time and 3-2 on aggregate.

The Norwegian champions were relieved to go through but must improve considerably if they are going to make things tough for Celtic.

Celtic, fresh from their 6-0 aggregate success over Northern Ireland champions Linfield, will be feeling confident and their fitness levels should be higher than they were in the previous round.

The home side are without suspended striker Leigh Griffiths but have enough firepower to get the job done.

Celtic also looked solid in defence against Linfield and can register a third successive clean sheet.

Turkish outfit Istanbul Basaksehir are embarking on their first Champions League campaign and can make an immediate impression by knocking out Belgian side Club Brugge.

Experience heavily favours Brugge, who have reached the group stage on four occasions, including last season.

However, the Belgians have the disadvantage of playing the first leg at home and are up against a strong team who have made stunning progress in recent seasons.

Basaksehir won promotion to the Turkish top flight in 2013-14 and have followed up by finishing fourth, fourth and second in the last three seasons.

They have been big spenders this summer and concluded an eye-catching deal by persuading left-back Gael Clichy to join from Manchester City.

The Turks aim to be playing Champions League group-stage football as soon as possible and can move a step closer by reaching the playoff round.