Celtic can put up some early resistance in Munich

Bayern may not steamroller Bhoys 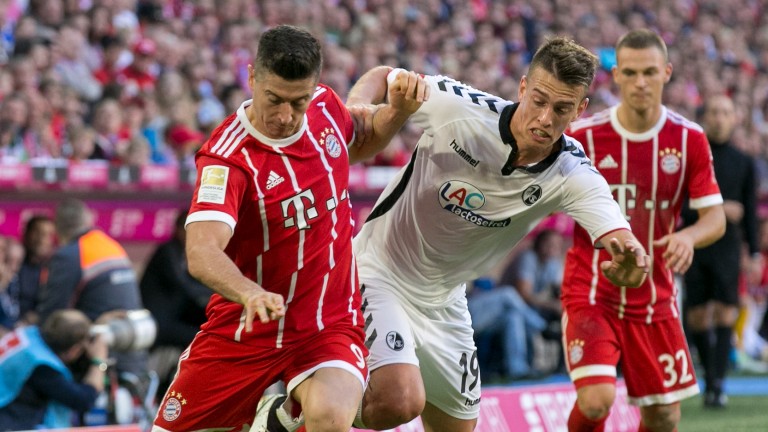 It's either a very good time or a very bad time to be in Munich depending on who you listen to but, either way, Celtic can at least avoid being steamrolled by Bayern at the Allianz Arena.

It’s a good time if you buy into the notion that Bayern aren’t quite as invincible as they have been in recent seasons and the German powerhouses do have their fair share of injuries.

But it’s a bad time if you subscribe to the alternative view that the return of Jupp Heynckes has seen spirits soar in the Bavarian capital – and there was certainly a party atmosphere as the great man inspired Bayern to a 5-0 drubbing of Freiburg on Saturday.

However we see it, bookmakers are in no doubt, going around 1-8 about the German champions in this Group B encounter.

Those odds are despite the fact that Bayern were chinned by Paris St-Germain in game two, the same night that Celtic started believing in themselves courtesy of a 3-0 romp at Anderlecht.

But the odds are still hard to argue with. Player for player Bayern are better than the Bhoys and they are formidable in front of their own fans, where they haven’t failed to find the net in Champions League action since April 2014. They’ve also won 16 and lost just one of their last 18 home Champions League ties.

A Bayern win does not offer a great deal of value to punters but one bet that might be worth considering is the first goal arriving after the 18th minute, which is a 5-6 chance with Paddy Power.

Bayern will be out of the blocks fast as they always are but Celtic can stand firm. The likely return of Scott Brown and Jozo Simunovic gives them more stability and pedigree, while it’s worth remembering that even in their most abject of efforts against PSG last month, they still managed to hold out until the 19th minute before the floodgates opened.

And now, having won in Anderlecht and been rightly condemned for their timidity against the French side, the Scots will surely be far stronger in Munich.

Bayern have scored 21 goals in the Bundesliga this season but only four of those have arrived inside the first 18 minutes.

So Celtic should be confident, though it’s hard to consider them as a betting proposition, even at odds of 33-1.

Bayern might not be as awesome as they once were but they are still a formidable challenge. Veteran Heynckes has a few injuries to fret over, but that weakens the bench more than anything else – the first eleven he starts with tonight are going to be frightening.

Nobody is more frightening right now than Robert Lewandowski, who is incredibly 1-3 to score at any time. The Pole has bagged 18 goals for club and country this season and, like so many of his team-mates, seems far more content under Heynckes than perhaps he was under Carlo Ancelotti.

Team news
Bayern
Manuel Neuer, Franck Ribery and Juan Bernat are long-term crocks. Javi Martinez has been ruled out and Arturo Vidal is a doubt.

Key stat
Bayern’s 13 matches this season have produced an average of 3.7 goals per game.