Powerful Fiji forwards may take a toll on Wales 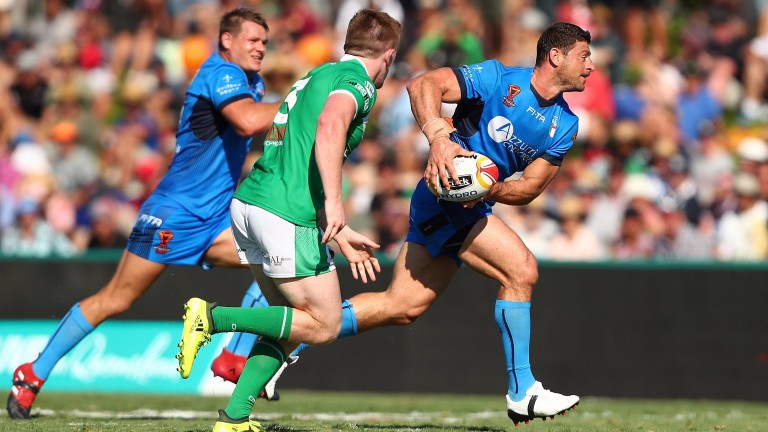 Italy were thumped 36-12 by Ireland in their Pool D opener last week but they should get back on track against USA.

It's win or bust for these two as USA were walloped 58-12 by Fiji and the Azzurri look far too strong.

Hull star Mark Minichiello skippers a squad with a wealth of NRL and Super League experience and they have been made 1-8 shots.

A better bet looks to be backing Italy to win by more than 18 points on the handicap.

The pair have met twice before with Italy running out winners by 40-16 and 34-6 and a similar outcome can be expected.

Ireland need a win to keep their hopes of progression alive but that looks unlikely in testing conditions.

PNG will be backed by a vocal home crowd while the sweltering conditions should also ask plenty of the Wolfhounds.

Mark Aston's men were impressive in victory over Italy but this is a tougher challenge and victory looks beyond them.

However, they do look a touch of value in receipt of 18 points on the handicap at evens with Betfred.

Papua New Guinea opened up with a 50-6 walloping of Wales and the Dragons could be heading following their tussle with Fiji.

Fiji thumped USA in their opener and they are 1-200 to follow that up against the Welsh.

The Fijian side looks formidable and they could make light work of their opponents.

They may meet some early Welsh resistance but that could subside under the weight of the Fiji forwards and it may pay to back the Bati covering a 22-point second-half handicap.

Lebanon are buzzing following last week's Pool A victory over France and the Cedars could use that to their advantage against England.

The section is shaping up as expected with Australia leading the way following Friday's win over France and England will be keen to get off the mark following defeat to the Kangaroos in their opener.

The top three qualify for the knockout stages in Pool A which takes the pressure off slightly but anything other than a win for England in their second outing would be disastrous.

Bookmakers expect it be plain sailing with England going off at 1-20 and giving up a 30-point handicap and that should be well within their range.

Lebanon are on a high and will be well supported - Sydney has a large Lebanese community - but England should be far too strong.

The defence looked solid against Australia, limiting the Kangaroos to just 18 points, and the Cedars could find it hard to break through.

Back England to cover the handicap and powerhouse prop Alex Walmsley to get over the whitewash on his debut.

Walmsley scored 11 tries in 31 Super League appearances for St Helens last season and he could be a handful coming off the bench.