St Helens go to the Jungle in a state of flux 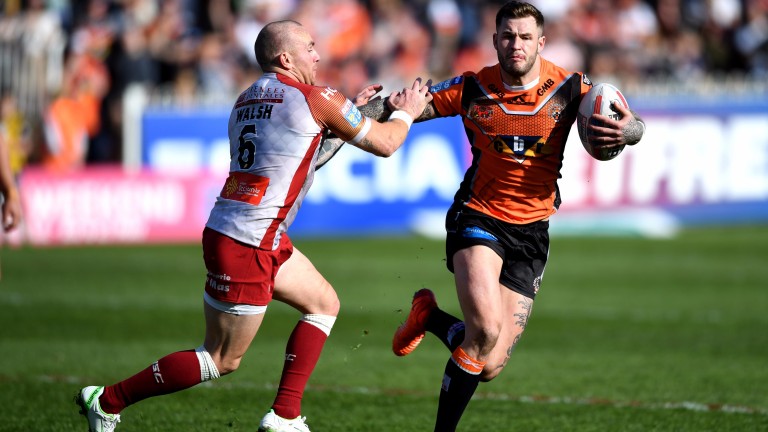 The rugby league landscape has altered dramatically since Castleford and St Helens last clashed in the Ladbrokes Challenge Cup 21 years ago.

In 1996, Saints routed the Tigers 58-16 at the Jungle on their way to Wembley glory. Shaun McRae's side went on to complete the double by winning Super League in its inaugural season. Castleford finished ninth.

But now Cas are leading the way, sitting top of the table while St Helens are languishing in seventh and Daryl Powell's team are 1-3 to emphasise that changing of the guard by winning this tie.

The league leaders lost 26-22 at Saints on Easter Monday but that shouldn't put punters off backing them.

The Tigers are a different beast back on their own patch - their six home games this year have produced resounding wins by margins of 50, 18, 36, 17, 56 and 28 points. Wigan and Leeds are among the teams they trounced.

By contrast St Helens' away record is awful. A 28-24 victory at Catalans is their sole success. There have been five losses including last week's collapse at Warrington where Saints squandered a 14-0 lead and were hammered 40-18.

Last time out, Castleford found a way to turn a late deficit into a win at Huddersfield and Powell is able to welcome back Zak Hardaker, Luke Gale and Mike McMeeken from England duty against Samoa and hopes to have Ben Roberts available after injury.

However, Rangi Chase's participation is in doubt with Cas investigating an incident in the crowd at Thursday's Featherstone versus Halifax tie which allegedly involved the half-back.

The Tigers dropped Chase for disciplinary reasons in February but his absence from the side against Leeds proved no hindrance as his teammates hammered the Rhinos 66-10.

Saints duo Alex Walmsley and Mark Percival return after flying to Australia and back as non-playing England reserves but the ten-point handicap chalked up by Sky Bet looks on the skinny side.

The visitors continue to have caretaker coaches Sean Long and Jamahl Lolesi at the helm as they wait for the arrival of new boss Justin Holbrook.

The club appears to be in a state of flux which is hardly ideal going into a fixture of this importance and difficulty and Castleford are taken to reach the quarter-finals with something to spare.