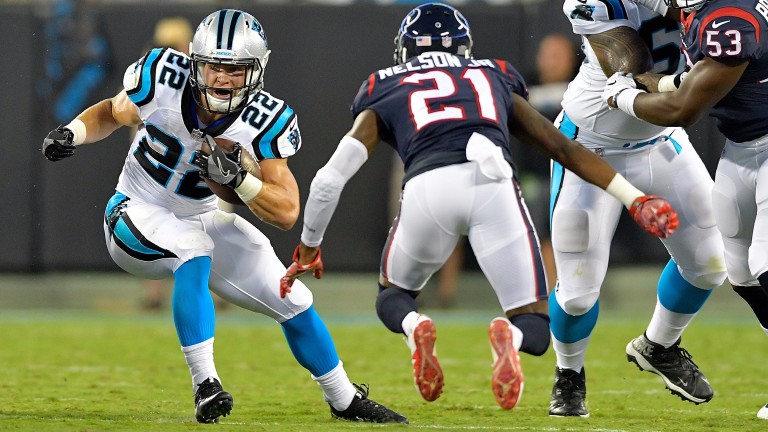 Christian McCaffrey could have a big season in Carolina
Getty Images
1 of 1
By Ian Wilkerson UPDATED 9:01PM, SEP 6 2017

Seven of the last 13 offensive rookies of the year have been quarterbacks, which would explain why Cleveland's DeShone Kizer has been of interest as he has claimed the starting berth for the Browns.

Kizer is the only QB drafted this year who is set to start in Week One.

It may not be long before DeShaun Watson replaces Tom Savage at Houston but while receiver Mike Williams could see plenty of the ball at the Los Angeles Chargers, it is the running back class of 2017 that catch the eye.

Leonard Fournette was the fourth overall pick for Jacksonville and he should be heavily involved for the Jaguars.

Parallels have been drawn with Dallas's Ezekiel Elliott, who rushed for 1,631 yards last season, but the Jags' offensive line is not of the same quality that Elliott played behind last year and Fournette may not receive the required support to make a huge impression.

Kareem Hunt could be the main beneficiary at Kansas City after Spencer Ware was ruled out for the season with a knee injury, but one player tipped to shine is Christian McCaffrey at Carolina.

After a disappointing campaign for the Panthers when they mustered just six victories, McCaffrey is just the sort of player they need to help quarterback Cam Newton bounce back from his worst season as a professional.

Former Stanford rusher McCaffrey has the scope to be a huge receiving threat and he is the sort of live-wire player who can catch the eye.

Cincinnati's Joe Mixon, who was taken at number 48 in the draft, should get an opportunity to shine as the Bengals do not have a strong rushing attack.

Jeremy Hill has failed to top 1,000 yards in each of the last two years, while Giovani Bernard is recovering from a knee injury.

Like McCaffrey, Mixon brings plenty to the receiving game and if he can stay out of trouble - the former Oklahoma rusher has had a couple of brushes with the law - then he can make a big name for himself.

The defensive end has already been dynamic in pre-season and put up some impressive athletic statistics in the combine tests before being drafted by the Browns.

Garrett is set to have a huge impact on Cleveland's pass-rush under new defensive coordinator Gregg Williams and his contribution is bound to be highlighted if the Browns' anticipated improvement materialises.

San Francisco linebacker Reuben Foster is second favourite but he has just recovered from shoulder surgery.