Cardiff on the way up with Warnock holding the reins 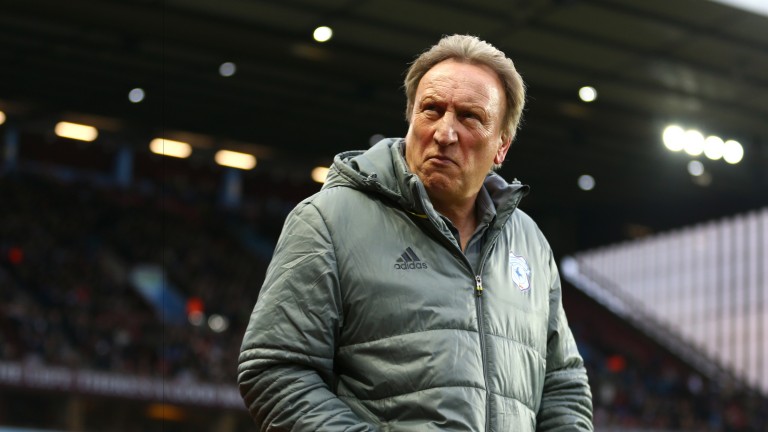 Cardiff v Brighton
Wily manager Neil Warnock has always relished the biggest challenges and he can lead his struggling Cardiff side to victory over high-flying Brighton in the Sky Bet Championship.

Cardiff were second-bottom when Warnock picked up the reins in October and slipped back to second-bottom with last Saturday’s 3-1 loss at resurgent Aston Villa.

However, anyone drawing the conclusion that there has been little or no improvement would be making a big mistake.

Cardiff have picked up ten points in seven matches since the change of manager and two of their defeats have come at Newcastle (2-1) and Villa, arguably the toughest games they will face all season.

They competed well on both occasions, missing out on the chance of a point at St James’ Park after a sound penalty appeal was turned down, and going toe-to-toe with Villa until Lee Peltier’s 84th-minute red card.

Warnock has talked of aiming for promotion and there is plenty of time for Cardiff to close the 11-point gap to the top six.

To get into the race their results at the Cardiff City Stadium will need to improve but there was encouragement a fortnight ago when they beat promotion-chasing Huddersfield 3-2.

Beating Brighton – who are second in the league and unbeaten in 12 games – will be tougher but not impossible.

The Seagulls have been piling up wins and their 38-point tally is the same as they had at this stage of last season.

However, there has been less fluency to their play since the last international break and they rode their luck in a 1-1 draw at home to Aston Villa and last Saturday’s 2-1 success at home to Fulham.

Winning without playing well is an art but Brighton look more vulnerable and their luck could run out against a direct, improving Cardiff side.

Wigan v Derby
The outlook is much brighter at Derby after a sequence of four successive wins and Steve McClaren’s slick side can collect another three points at the DW Stadium.

Derby’s players have grown in confidence under a manager who knows most of them well and there was a resilience about them last Saturday as they ground out a 1-0 win at home to a Norwich side who are showing renewed determination.

The playoffs are in sight as Derby sit just three points outside the top six and today’s contest is another they will be confident of winning.

Wigan have tightened up defensively under their new manager Warren Joyce and took advantage of some appalling Huddersfield defending to post a 2-1 away victory in front of the Sky cameras on Monday.

Pacy forward Yannick Wildschut – converted to a centre-forward under Joyce – was the big threat against the Terriers and will continue to cause problems for opponents who defend with a high line.

However, Derby are very disciplined at the back – they have conceded the second-lowest number of goals (13) in the division – and if they look after Wildschut they should take three points.

Chesterfield have kept one clean sheet in their last 16 games and rode their luck last Saturday, winning 3-2 at home to Bristol Rovers despite losing the shot count 17-6.

Wycombe are on their best run of the season, having won four in a row, and they were impressive 2-1 winners at Portsmouth in the last round.

They can secure at least a replay and are value at 41-40 receiving a quarter-goal start on the Asian handicap, ensuring a full stakes winning bet if they win and a half-stakes profit if they draw.

Burton v Rotherham
Rotherham’s disastrous campaign took another turn for the worse when Kenny Jackett stepped down as manager earlier this week and a positive end to the week seems unlikely for the Millers at Burton.

At the start of the season Burton were 11-10 in the relegation betting while Rotherham were 9-4.

But the Brewers have adapted reasonably well to life in the second tier and go into today’s match with a 12-point cushion over their opponents.