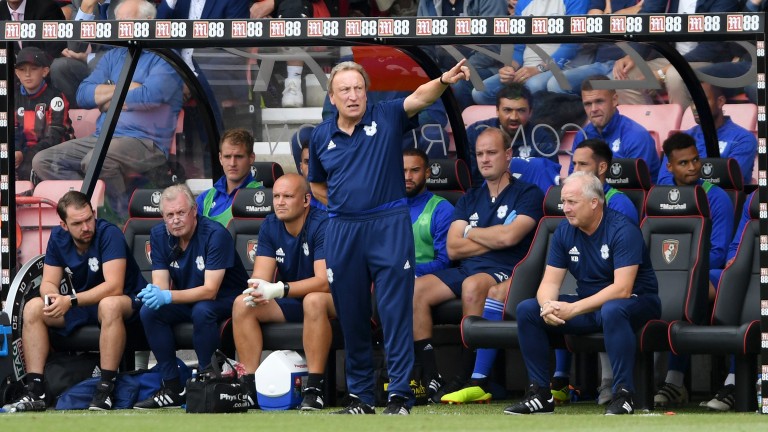 Wolves celebrated wildly after winning 1-0 at Cardiff in a key Sky Bet Championship fixture in April but they may be the victims of a revenge mission on their return to the Welsh capital.

There was a brewing rivalry between the teams last season and it came to a head at the Cardiff City Stadium where the home side missed two injury-time penalties.

The second missed spot-kick from Junior Hoilett triggered an outpouring of joy from Wolves manager Nuno and did not go down well with Warnock, who was bitterly disappointed to lose such an important match.

The stakes are again high this week with Cardiff needing a win to drag themselves out of the drop zone and Wolves anxious to end a poor run of four losses and a draw from their last five games.

Six weeks ago Wolves were only three points outside of the top four but a 2-0 loss to Watford was just the beginning of a sharp downturn and a defeat at Cardiff might leave them fearing for their top-flight status.

Wolves were odds-on favourites to win at home to Huddersfield last Sunday but they were outplayed for the majority of the game and could have no complaints about their 2-0 defeat.

One of their great strengths in the early part of the season was a consistency of team selection with the same 11 players starting their first nine league games.

But it soon became a weakness when performances started to slip and Wolves were lacking a credible back-up plan.

Fringe players have looked short of confidence and sharpness, making it difficult for Nuno to affect the game with his substitutes.

Against the Terriers he made a double change at half-time, bringing on Morgan Gibbs-White and Adama Traore for Joao Moutinho and Ivan Cavaleiro, but their performance went from bad to worse.

It all leaves Nuno less certain than ever about his best starting side.

Cardiff will be well aware of Wolves's fragile state and are likely to be under instructions from Warnock to unsettle their opponents at every opportunity.

A physical, direct style can be expected from the Bluebirds and they will offer a threat on the counter-attack with the pace of wingers Josh Murphy and Kadeem Harris.

Wolves are likely to see more of the ball but their passing game has lacked purpose and penetration recently and that may continue to be the case until confidence returns.

Following their recent struggles they look like a team there for the taking and the opportunity could be accepted by Cardiff, who look value to chalk up a third home win of the season.

Wolves
Wolves have report no fresh injuries but Jonny (knee) is unlikely to feature again this year.

Key stat
Wolves have scored fewer than two goals in each of their last seven away Premier League matches.